Coty invited the stars of E network's "The Girls Next Door" up to the penthouse of Manhattan’s Hotel on Rivington for a party last week. 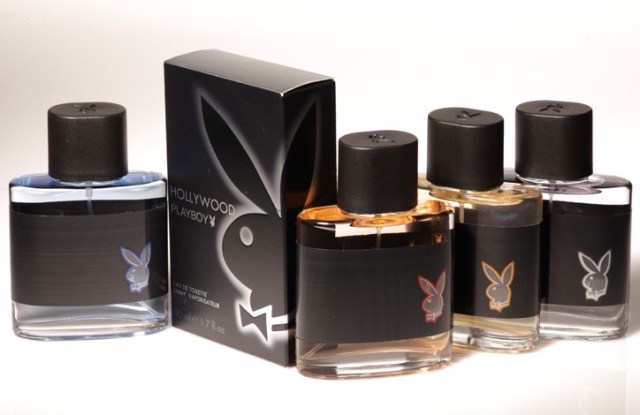 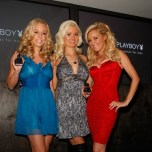 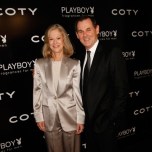 Coty invited the stars of E network’s “The Girls Next Door” up to the penthouse of Manhattan’s Hotel on Rivington for a party last week. The occasion marked the launch of the beauty firm’s four Playboy fragrances, which were first introduced in September.

Christie Hefner, chairman and chief executive officer of Playboy Enterprises Inc., made sure that the playmates — Holly Madison, Bridget Marquardt and Kendra Wilkinson — stayed out of trouble. Also on hand was Bernd Beetz, ceo of Coty Inc., and Steve Mormoris, the firm’s senior vice president of global marketing.

The union between the two heavyweights, Coty with its $4 billion in sales, and Playboy with its $339.8 million in sales last year, is meant to play on the lifestyle positioning of the sexed-up men’s magazine.

“We launched four fragrances because we wanted to capture the multiplicity of the Playboy guy,” said Mormoris, who noted that the collection also is meant to be “emblematic of four American cities where the playboy lifestyle is played to its fullest.” That is: Hollywood; Las Vegas; Malibu, Calif., and Miami.

“The Playboy brand has an extraordinary range of popularity,” Hefner, the daughter of founder Hugh Hefner, added in an interview. “It is aspirational and sophisticated.”

The Playboy scents have launched or are being rolled out to global mass channels of distribution through next September in regions such as North America, Europe, South America and Asia, Mormoris noted. In the U.S., where the scents were officially launched Sept. 1, they are carried at CVS, Rite Aid, Meijer and Target. The scents will reach Kmart and Sears stores during the winter and spring, and in Western Europe, the scents are to be rolled out in Carrefour and Metro.

“Playboy is a brand that represents a lifestyle truly well known all over the world,” said Mormoris.

The scents are aimed at guys 18 to 25 years old, a customer base Coty also said it sees ranging up to 35 years of age. Each scent is priced at roughly $15. Industry sources estimate that they could do retail sales of $50 million in their first 18 months on the market, and eventually reach upward of $80 million in retail sales volume.

During the event last week, Madison, Marquardt and Wilkinson held court and offered their picks from among the four scents. “My favorite is Malibu, because it’s sporty and I love blue,” said Wilkinson, noting that the 20-episode season five of “The Girls Next Door” has begun.

Marquardt, who is partial to Vegas, said she is gearing up to host a Travel Channel show in the spring called “Bridget’s Sexiest Beaches,” and Madison likes — you guessed it — Hollywood.

There was even scuttlebutt among the girls of doing their own scents.

“The opportunity to do women’s [fragrance] is appealing,” acknowledged Hefner. “Given the [firm’s] heritage as a men’s magazine, there is crossover for women — 75 percent of Playboy products today are for women. ‘The Girls Next Door’ is the top-rated cable show among women 18 to 29 years old.”

Mormoris addressed the question about the possibility of Playboy women’s scents by saying that, while Coty’s mass market fragrance business is strong on the men’s side, he does see opportunity in women’s. “But it’s a brand for men and we’ll launch the next two years with men’s,” he said.

Two fragrance suppliers, Symrise and Givaudan, participated in the creation of the scents. Hollywood was blended by Symrise perfumer Vincent Kuczinski, and Dirk Braun of Symrise did Miami. Malibu was mixed by Givaudan’s John Gamba, and nose Jack Agran gave Vegas a spin.

Playboy Enterprises reported Thursday that it swung to a loss of $5.2 million, or 15 cents a share, during the third quarter from profits of $2.6 million, or 8 cents, in the same period a year ago. Net revenues were down in the three months ended Sept. 30 to $70.4 million, a 15 percent decline from $82.8 million in the year-ago quarter.

During the firm’s quarterly earnings call Thursday, executives announced a segment loss in its publishing unit of $1.3 million — slightly narrower than the $1.4 million loss the division recorded a year ago.

Revenues for the division were also down 5.6 percent to $21.8 million, from $23.1 million last year, a $1.3 million decrease. The company expects ad revenue to decline 17 percent during the fourth quarter.

There are also plans to combine the magazine’s July and August issues in 2009 and the company isn’t sure how it will participate in this year’s Super Bowl — Playboy has a long history of hosting Super Bowl parties.

“While we are huge fans of Super Bowl weekend and are participating in the DirectTV celebrity beach bowl event, this year we decided to refocus our marketing resources and efforts on new and different projects, including the playboy.com redesign, our 55th anniversary and our Rock the Rabbit program, which is expected to include several events throughout 2009,” said a Playboy spokeswoman.