Prada Kicks Up Its Heels With Youthful New Scent

Prada Candy is intended to be the brand’s third scent pillar; the others are Amber and Infusion d’Iris. 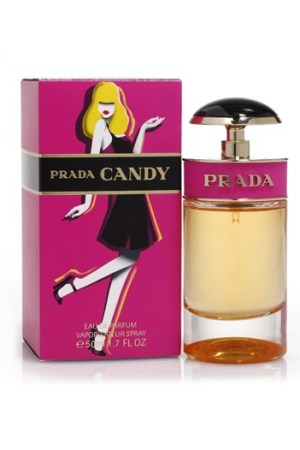 José Manuel Albesa, chief brand officer of Puig, Prada’s scent licensee, noted the scent is “something completely different from what we’ve been doing until now.

“Prada has the ability to reinvent itself when it wants to and Miuccia [Prada] wanted to make a bold statement with this launch,” said Albesa. “This scent is more feminine and more excessive than past launches. It has an explosion of joie de vivre that is quite unique for us, and uses a lot more color, including an outer packaging with a drawing.”

Added Didier Maine de Biran, regional vice president for Puig North America: “Up until now, we have explored the more traditional and classic side of Prada, but the brand is much more than that. With Prada Candy, there is a wish to explore the more daring facets of Prada fashion: the modernist, creative and colorful sides.”

The scent is intended to be Prada’s third scent pillar; the others are Amber and Infusion d’Iris.

The juice, by Givaudan’s Daniela Andrier, comprises a cocktail of musk notes which envelops the other two major components: Laotian benzoin — usually used in concentrations of about 3 percent, it is a 12 percent concentration in this juice — and caramel.

The Art Deco-inspired bottle has a spray-through black and gold cap, with shocking pink saffiano accents and gold letters. The outer box features a line drawing of a blonde girl on a fuchsia background and was created by illustrator François Berthoud. “The Prada Candy packaging is a new incarnation of the Prada Candy femininity, inspired by the ad campaign and the bottle design,” said Maine de Biran. “The striking cartoon illustration actually evokes the packaging of Fifties beauty products.”

A men’s counterpart is not currently planned, said Albesa. “Prada Candy is the ultimate femininity, so we will stay with women’s for now,” he said.

Print and TV advertising are both planned, and were shot by Jean-Paul Goude. The TV commercial concept is of a young piano student — played by French actress Léa Seydoux— who seduces her piano teacher with a wild dance inspired by the Apache dance of early 20th century Paris. The print ad is a tight shot of Seydoux holding the bottle against her face.

In the U.S., print ads will break in October fashion, beauty and lifestyle magazines, while the TV campaign will run only online. A major sampling campaign is also planned.

While executives declined comment on projected sales, industry sources estimated that Prada Candy would generate retail sales of about $8 million in the launch period from September through December.