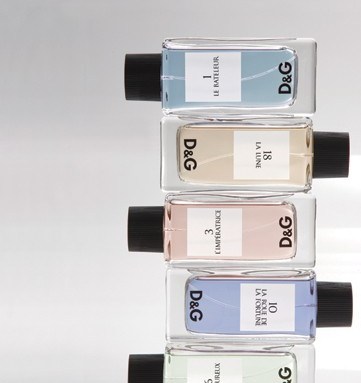 Made up of five scents, The D&G Fragrance Anthology is set to launch globally in September, and also marks the birth of a new fragrance portfolio under the D&G brand. The five fragrances are inspired by different tarot cards, each with a distinct identity and represented by a different model, some of them iconic and all of them naked in the advertising.

According to industry sources, the project is brimming with ambition at a time when the industry is reeling under the worst beauty market in decades. Sources estimate The D&G Fragrance Anthology could generate as much as $400 million in retail sales in its first year of launch.

In an exclusive interview in the duo’s private offices in Via San Damiano here, Gabbana explained how he and Dolce established foundations for the D&G scent portfolio. Gabbana also revealed he and Dolce were close to finalizing another two scents to continue the anthology’s story ready for launch next year.

“D&G must be something that is completely diverse than Dolce & Gabbana, and in this moment a project with five fragrances seemed like the newest thing to do, rather than come out with one women’s and one men’s scent,” Gabbana said.

“The fragrances are completely different from one another, but the whole approach to the D&G project is completely diverse: the communication, the imagery and the presentation,” said Gabbana.

Dolce added: “The objective of this project was not only or just to put new products on the market but propose a dream that for us represents the world of D&G.”

Gabbana and Dolce aimed to capture different sides to their personalities in the five fragrances, and gave them names referencing tarot cards and their corresponding numbers.

The scents: Le Bateleur 1, L’Imperatrice 3, L’Amoureaux 6, La Roue de la Fortune 10 and La Lune 18 were created without target, age or gender barriers. Each scent also gets its own face. Supermodels Claudia Schiffer, Eva Herzigova and Naomi Campbell, and three established male models: Fernando Fernandes, Noah Mills and Tyson Ballou — all naked — star in the scent collection’s advertising campaign shot by Mario Testino. Campbell appears in the L’Imperatrice’s visuals, the empress. Schiffer fronts the imagery for La Lune, which is the moon, and Herzigova pairs up with Fernandes in the photo for La Roue de la Fortune, the wheel of fortune.

Testino also shot a TV commercial for the collection. The ads were edited into 30- and 60-second formats. P&G executives refused to discuss budgets, but industry sources estimate, based on the high sales target, that P&G might spend as much as $20 million to $25 million on media alone.

“We choose Claudia, Naomi and Eva for the iconic value they have in the minds of everybody,” said Dolce.

“They are icons,” added Gabbana, “not just for young women but older women too. Sometimes they are better known than actresses. People need to create icons, to see people they recognize.”

The D&G Fragrance Anthology’s launch on shelves will coincide with an image overhaul for D&G boutiques to be unveiled, starting in October. The designers have worked on fine-tuning the D&G fashion brand’s message since bringing it back in-house three years ago.

“D&G has less roots; it’s more free, and that freedom is more innate in the collections and in the fragrances, because the DNA of D&G is liberty. The DNA of Dolce & Gabbana is the Mediterranean, so we have to stay within that story parameter, whereas with liberty we can do everything — that’s the real difference,” added Gabbana.

“We believe that the D&G part of the brand is about innovation and experimentation. This has nothing to do with age or gender — it’s a way of looking at the world. One of our guiding principles for this project was the idea of, ‘Who do you want to be today?’”

He also outlined The D&G Fragrance Anthology’s unconventionality — a collection of fragrances launched simultaneously with a broad distribution of 13,000 to 15,000 doors, accessible luxury price points of $65 for a single size of 100 ml., and an expansive advertising and support campaign.

“We are spending a lot of money in advertising, so we are going to be very demanding with the distribution and the in-store presence. This concept can only come to life if you see the whole collection on the shelves — that’s what’s going to make the customer buy more and also help us build market share and increase space with our retailers,” Strobel said.

Though Procter & Gamble planned a September global launch date, The D&G Fragrance Anthology will preview on U.S. counters from July 25 in Nordstrom nationally, and in Bloomingdale’s 59th Street and SoHo locations in New York.

According to Strobel, Procter & Gamble will insist retailers stock every scent of The D&G Fragrance Anthology and present them in both the men’s and women’s fragrance display units.

Though the scents aren’t differentiated as male or female, two are considered more feminine — La Lune, which has a blend of lily and tuberose heart with a base of sandalwood, musk, orris and leather, and L’Impératrice which has watermelon, kiwi, pink cyclamen with a musky base.

Le Bateleur, a mix of aromatic top notes, an aquatic heart and a cedarwood and vetiver base, and L’Amoureux, which features spicy top and middle notes of bergamot, juniper, pink pepper, cardamom, birch leaf and orris heart and a sensual wood and musk base, have more masculine olfactory pyramids.

La Roue de la Fortune is considered unisex with its feminine tuberose, gardenia and jasmine heart and masculine benzoin and patchouli base. Procter & Gamble’s in-house noses created two of the scents, while P&G’s fragrance creation team and fragrance houses Givaudan and Firmenich formulated the others. The scents are also marked apart by the pastel-hued color of their juices.

“If you think about it, this has always been D&G’s spirit — something colorful, creative and fresh inside and an outside that is simple and pure; an integral part that doesn’t detract the attention from its essence,” said Dolce.

Gabbana admitted he does not have his tarot cards, but he recalled having an encounter with the dark arts at a young age. In his early teens, Gabbana had his hand read by a gypsy. “She told me I would become really famous,” he said with a lingering smile.