The Songe d’Iris women’s fragrance is billed to have a “serene freshness.” 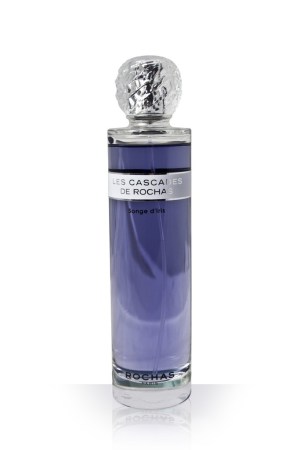 Like its predecessor, the new scent is fresh. However, there’s a “serenity, quietness” to this edition, according to Rochas’ in-house perfumer, Jean-Michel Duriez.

In spring 2012 Rochas kicked off Les Cascades with Eclat d’Agrumes, which is meant to give the impression of heat and freshness simultaneously. Its key ingredient is mandarin.

“For the second one, we really wanted to speak again about freshness, but in another way,” said Duriez. Here, the key note is iris, which is mixed with accords of white aqueous flowers and fig milk plus resinoid.

Olivia Palermo remains the face of Les Cascades fragrances. For Songe d’Iris’ print campaign Giampaolo Sgura photographed her near the fountain in Paris’ Place des Vosges. Palermo described the advertisement as “very soft, and I think it really captures the Paris feel that we were going for.”

In the campaign, she sports a lavender-colored, strapless bodysuit designed by Rochas creative director Marco Zanini.

“Lavender is one of my favorite colors….I think it fits perfectly,” she said.

Songe d’Iris’ bottle cap is the same as that of the other Rochas eaux.

Les Cascades stems from a lineage of fragrances: Eau de Rochas Fraîche from 2010 and Eau Sensuelle from 2009. The two were modern reinterpretations of Eau de Rochas — created in 1970 by Nicolas Mamounas, which took a cue from Apollo’s fountain in Delphi.

The fragrance made its debut exclusively in France’s Marionnaud stores on Monday. It will then hit counters on July 1 elsewhere in the country and also markets including Spain, Sweden, Denmark, Finland, the Benelux countries and Switzerland.