He will introduce the floral scent Romantina in July. 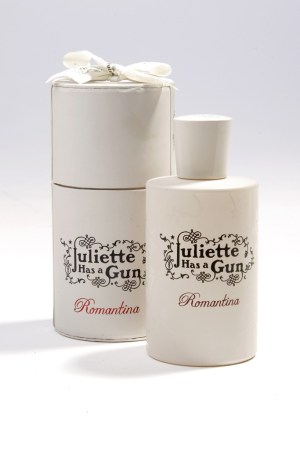 No damsel in distress here.

For perfumer Romano Ricci, the gun-toting Juliette, his take on the Shakespearean protagonist, is the perfect inspiration for his collection, Juliette Has a Gun. He will introduce the range’s first floral scent, Romantina, in July, to explore another side of his olfactive heroine.

“In appearance it is dedicated to an innocent woman but if you look closer, the chypré side of the fragrance will tell you that she’s more surprising than that,” said Ricci, who launched his line in 2006 with two scents, Miss Charming and Lady Vengeance, both created in collaboration with celebrated perfumer Francis Kurkdjian. Ricci’s version of Juliette, who he describes as “untouchable” has been at the center of six of his eight fragrances.

“On one side she wants to be a man hunter, but on the other, she also pursues a hidden romantic quest,” said Ricci, who calls each of his creations “olfactive portraits.” “She can’t decide which one she wants to be, and that’s also what makes her so mysterious.”

Romantina, is described by Ricci as the first “innocent” portrait he has created. Industry sources estimate the scent could generate $680,000 in its first year at retail. It will be available in about 500 doors in 50 countries.

“The statement of the brand is to get rid of the ingredient speech (even if the ones we use are very highly qualitative) to concentrate on the effect the perfume creates when you wear it,” said Ricci, who added that his line is “dedicated to a younger (25 to 45), trendier, and more urban population than the traditional niche brands.”

To that end, Ricci said unlike many other beauty brands, he is not looking to expand distribution any time soon.

“I want the distribution to stay exclusive, I like the fact that the brand remains difficult to find,” said Ricci, the great grandson of fashion designer Nina Ricci and the grandson of perfumer Robert Ricci, who created L’Air Du Temps.

“I like to look at fragrances as weapons of seduction,” said Ricci. “It’s a sort of game where you become the person you want to be when you wear the fragrance. Just like an incredible dress or an amazing pair of shoes. It transforms the way you see yourself, and you feel suddenly more confident and proud about of our femininity and ready for any unexpected occasion.”