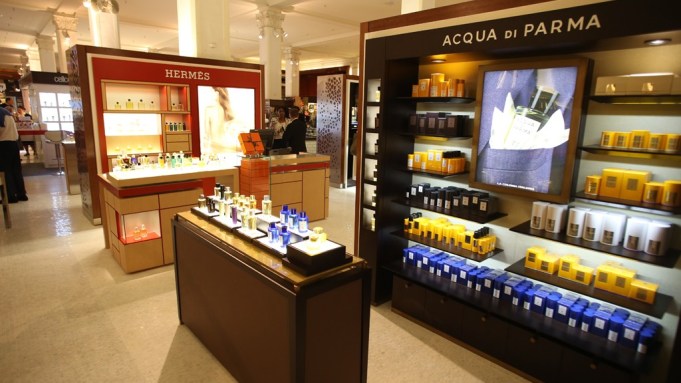 The walls have come down at Saks Fifth Avenue’s fragrance department.

The department store has cleared 2,600 square feet of space in its flagship for an open-floor concept populated by branded fragrance boutiques. The expansive space — set apart by a white, mosaic marble floor — is the first thing shoppers see as they enter the store from Fifth Avenue.

“We’ve opened it up and made it more engaging and added special services and objects,” said Deborah Walters, senior vice president and general merchandise manager for cosmetics, fragrances and intimates at Saks. “It’s really the return to the art of fragrance.”

Gone are the tall, cherry-wood backdrops and traditional display counters. Saks has replaced them with customized fixtures — punctuated with sleek visuals and videos — designed to allow shoppers to seamlessly weave throughout the space and converse with sales associates. “They can actually, touch and feel and interact,” said Walters.

It’s the latest major overhaul on Saks’ beauty floor, and it comes after the retailer has revamped much of its beauty floor over the last three to four years. The improvements have included adding alcoves for more personalized services to a number of cosmetics counters. The changes also come amid seismic shifts in ownership and top management.

Each brand has worked to showcase its own point of view and signature look. For instance, black tassels hang from the drawers of the By Kilian concept; the glossy Chanel counter is comprised of black and gold, and at Acqua di Parma, its signature yellow boxes pop against dark wood fixtures.

Within the middle of the space is a row of designer scents housed on a steel shelf fixture. It’s populated by Marni, Gucci, Carven, Viktor & Rolf, Prada and Thierry Mugler among others.

New to the fragrance assortment at the flagship door is Le Labo, which specializes in scents that are handmade at the point of purchase and include a personalized label. Its boutique mirrors the modern apothecary look of the brand’s stand-alone stores. Rows of raw ingredients are displayed against a wall of white title, while others are kept in a small refrigerator below the counter. A mixing station is also on full view.

Le Labo had previously entered Saks’ Houston store, which houses a smaller-scale version of the new fragrance department that was completed in spring 2012.

Walters, who expects to add four to six brands to the space next year, said the concept is also teeming with exclusive services and products. The mirrored and glittering Bond No. 9 boutique is the only location that includes a Swarovski Bar, where customers can buy collectible perfumes or create made-to-order, blinged-out bottles that range from $500 to $1,000. Bond No. 9 also offers custom blending, which previously was only available at its stand-alone stores.

At Acqua di Parma, customers can opt to have leather atomizers monogrammed, and at the nearby Hermès boutique fragrance purchases are placed in the brand’s signature orange boxes and decorated with a ribbon that corresponds to each scent. On display within the expanded Hermès assortment are three groupings of “seasoned” ceramics used to sample scents. The ceramics previously were only found in France and Asia.

Saks opened the space to shoppers earlier this week, but will fete the new department with 10 days of in-store events — including personal appearances by many of the brand founders — beginning on Thursday. Penhaligon’s will kick things off with a (spoiler alert) flash-mob performance by the American Ballet Theatre. Ballerinas will dance in between the displays in a nod to Penhaligon’s latest ballet-inspired scent, Iris Prima.

The concept is flanked outside the new area by several other luxury brands, including the Jo Malone display, which Walters said will soon undergo a refresh as well, and Tom Ford, which is nestled in the larger Tom Ford Beauty counter.