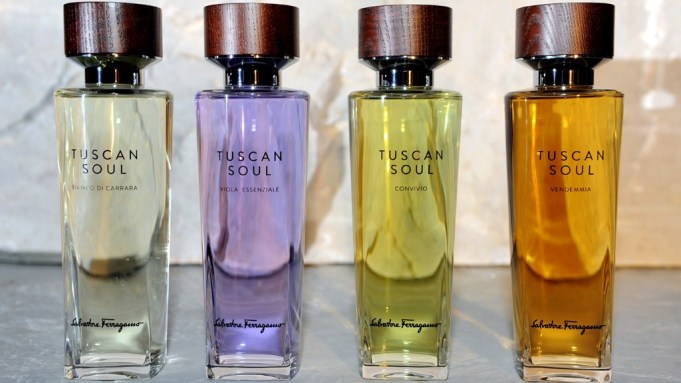 CARRARA, Italy — The association between marble caves and sophisticated, niche fragrances may not be automatic, but the concept behind Salvatore Ferragamo’s new Tuscan Soul Quintessential Collection is intrinsically linked with this unique location, famed worldwide for its white stone.

“I’m speechless. It’s the first time I ever came here, although it’s not far from Florence, and I couldn’t believe my eyes coming here — I don’t know how many photos I took driving up,” marveled Ferruccio Ferragamo, chairman of the Florence-based luxury company. Ferragamo hosted an event to launch the four Tuscan Soul fragrances at the Cave Michelangelo, where the Renaissance artist procured marble for masterpieces such as the Pietà and the David. “At first, I didn’t see the link, but now I understand it’s a natural one between what Ferragamo does and Tuscany and Florence.”

The fragrances — named Bianco di Carrara, Vendemmia, Viola Essenziale and Convivio — capture staple symbols of the region and its most famous city: the marble; the iris, most commonly violet, and the emblem of Florence since the Medicis; wine and the vineyards that pepper the Tuscan hills, and the pleasure of shared meals. The Ferragamo family owns Il Borro, a resort, spa and winery outside Florence that joined Relais & Châteaux this year.

Images of these motifs were projected on the marble slabs after sunset as tenor Enrico Nenci and soprano Sarina Rausa sang arias such as “Nessun Dorma” and “O mio babbino caro”  from Giacomo Puccini’s “Turandot” and “Gianni Schicchi,” respectively. A dinner followed the event at prestigious marble sculpture Nicoli & Lyndam studio.

“I wanted to speak of the excellence of Tuscany and  Florence through its symbols, representative of art, architecture, purity and beauty,” said creative director Massimiliano Giornetti, who hails from Massa Carrara. He underscored the values of artisan craftsmanship and antique techniques as essential to the story behind the fragrances, as much as the “perennial process of cutting marble,” which continues to be transferred to the docks of the antique city of Luni nearby to be shipped around the world.

The four fragrances, said the designer, can be worn by men and women alike. “ The concept of different scents depending on genre is so old,” he said.

While relying on the fragrances to transmit the Salvatore Ferragamo messages of Made in Italy, heritage and Italian craftsmanship, the company is also banking on the category to expand brand awareness and attract new customers. “Fragrances are a strong vehicle in regions such as China, where they help us cover more cities through shop-in-shops and counters than we would [with other categories],” said chief executive officer Michele Norsa.  “Perfumes are increasingly appealing to consumers in China, which is a market that has a bigger growth potential than other countries.”

The fragrance division accounted for around 7.1 percent of ex-factory sales last year. The scents are made in-house by Ferragamo Parfums. In 2012, the parent company reported revenues of 1.15 billion euros, or $1.47 billion, up 17 percent compared with 986 million euros, or $1.37 billion, in 2011.

The eau de toilettes are available in 75-ml. bottles in transparent glass, which allows for the color of each scent to be visible, with an ash wood cap, and retail at 150 euros, or $202.50 at current exchange.

First available only at selected Salvatore Ferragamo boutiques starting in November, the rollout is expected first in Europe and Asia, and in China and the U.S. in February, and will gradually be extended to a number of department stores, such as Neiman Marcus, Harrods, Gum and Tsum, said Ferragamo Parfums ceo Luciano Bertinelli.

The first Tuscan Soul fragrance was launched in 2008. A Lifestyle Home Collection under this moniker was launched a year later. Norsa said there are no immediate plans to enter skin care or makeup.