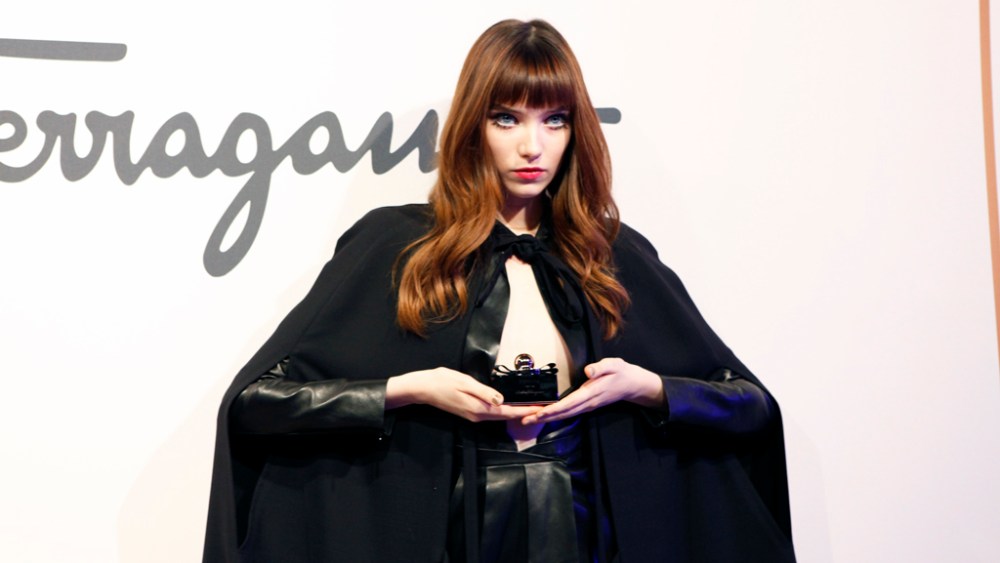 “Women are multifaceted and polyhedral,” said Luciano Bertinelli, chief executive officer of Ferragamo Parfums, at an event organized Wednesday here to present the eau de parfum, which will hit shelves in February, first in Europe and then the U.S.

Held at the city’s 16th-century Forte Belvedere perched on the Boboli hill overlooking Florence, the event itself had been shrouded in mystery, with few elements being revealed ahead of time. At the fort, the elegant black bottle was displayed on a striking installation of boules in the colors of the Signorina fragrances, from black to powder pink, and designed by architect Patricia Urquiola.

After showing the ad campaign’s four-minute film, around 100 guests watched a performance by Italian choreographer Susanna Beltrami — along the theme of the evening, “My life is a play.” Seven Ferragamo-clad dancers pirouetted on a stage set up against the backdrop of the Florence skyline at night, joined by model Grace Hartzel, the face of the new ads, who concluded the performance.

Bertinelli praised Hartzel’s “character and charisma” that stand out in both the short movie, filmed in interiors in Budapest and directed by Sebastien Grousset, and the ad stills, photographed by Angelo Pennetta. The executive was enthusiastic about the company’s venture into filmmaking for the scent, a project that called for 40 actors and 300 extras — all wearing Ferragamo.

The film comprises three acts, one for each Signorina scent — the original namesake fragrance launched in 2012, “romantic and cheeky,” said Bertinelli; the seductive Signorina Eleganza, launched in 2014, and the latest, “unpredictable,” Signorina Misteriosa. The film and the images will either communicate all three fragrances together or be dedicated only to Misteriosa.

“This new product reflects three different sides of the same woman,” said Bertinelli. Misteriosa and its sister fragrances are part of Ferragamo’s strategy to rejuvenate its target audience, he said.

Michele Norsa, chief executive officer of the publicly listed Ferragamo group, said the scents help “cover different segments,” and attract a younger customer, “which is fundamental for our future,” while increasing the brand’s desirability. To be sure, fragrances help create brand awareness, allowing customers to “feel part of the dream with 50 euros — if we tell the story well,” said Bertinelli.

Ahead of the dinner, which was cohosted by the brand’s creative director Massimiliano Giornetti, Sophie Labbé of International Flavors & Fragrances Inc., who also worked on the previous Signorina scents, said “fresh, bitter” top notes of the fragrance include wild blackberry and neroli. Orange blossoms and “the sensual opulence” of the tuberose contribute to the “feminine, oriental fruity” scent. A patchouli heart, said Nicolas Beaulieu of IFF, adds a sophisticated element, while a black vanilla mousse marks the base. The fragrance bottle maintains the rectangular shape of the other two Signorina, with a pink gold base and rounded cap decorated with a grosgrain Vara bow in black. Bertinelli said the eau de parfum will be distributed in 18,000 perfumeries in the world.

While the group saw flat fragrance sales in the first nine months, Bertinelli said the division would close the year with an increase. The effect of this launch will help boost 2016, he noted, which will also gain from “the important” launch in September of the brand’s new men’s fragrance called “Uomo.”

As for the group’s overall business, Norsa said he had seen an improvement in Russia, which is “picking up,” and that the ruble is recovering, and expressed confidence about Mainland China, where investments in stores and development continue. Hong Kong is still dented by its “political climate,” but its “capacity in terms of retail,” as well as in Macao, is “extraordinary,” he observed. He expected the launch of Misteriosa in February to benefit from the Chinese New Year and Valentine’s Day. Norsa underscored once again the relevance of travel retail and said “the most important thing is to understand where travelers go, what they want, if they go to resorts or casinos.”