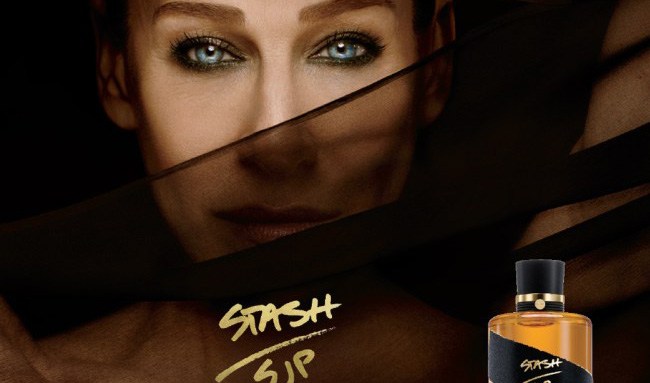 She called the new eau de parfum “Lovely’s naughty, subversive sibling,” and her “secret” during an interview with WWD last month in her showroom for the SJP by Sarah Jessica Parker footwear brand in the Flatiron District here. She partnered with George Malkemus, chief executive officer of Manolo Blahnik USA, to launch her footwear collection two years ago, almost a decade after she introduced her first fragrance, Lovely, in 2005.

“It’s like ‘street,’ it’s like contraband. It’s the cheese that’s not pasteurized,” she said, holding up the bottle of Stash, which looks more like an old-fashioned, 100-ml. bottle of spirits than an eau de parfum.

For however lovely “Lovely” is — Parker’s most well-known scent that came out 11 years ago — Stash is anything but. It’s sexier and raw, according to the actress, who is gearing up for the premiere of HBO’s “Divorce” in October, her first TV role since the last episode of “Sex & the City” aired in 2004.

The amber color of the juice evokes the feel of whiskey, and the ripped black gaffer tape label — which mimics a piece of electrical tape — was strategically “slapped on” on an angle. It’s packaged in a black box inside a black grosgain bag and a satin black-and-gold rimmed cap is wrapped in twisted black twine. It’s edgier than anything she’s ever done and while not billed as “genderless,” she called it “fragrance for the human being.”

Stash’s concept and idea predates that of Lovely, the first scent she created with Coty Inc., her licensee at the time, and International Flavors and Fragrances. She created Covet in 2007 and SJP NYC in 2009 with Coty before taking a seven-year hiatus from the beauty space. At the end of 2014, the license for Parker’s fragrances was taken over by Lovely Distribution Co., created specifically for Parker’s fragrance license. She continued to work with IFF to bring Stash to fruition.

Parker said when she ventured into fragrance, the idea of an actor developing a scent wasn’t a “common affair.” However, the past decade or so has seen the rise — and subsequent decline, according to sales figures and retailers — of the celebrity fragrance. The celebrity trend has been replaced by an influx of niche and indie brands, which are quickly creeping into many retailers’ bestselling scents.

This could be an asset to Parker, who said she was unable to bring Stash to market more than a decade ago because she was told it wasn’t commercial enough. It’s this lack of commerciality, though, that could make this the perfect scent for a celebrity to launch right now, she maintains. In addition to Parker’s fans, the fragrance will likely appeal to a more “niche” audience because of its bottle inspired by apothecary glass, a juice that she likens to “good rum” and black packaging.

Teri Siegel, a global marketing consultant who works with Lovely Distribution Co., said the team went into the project knowing the current perception of celebrity fragrance.

“It’s not that we went into this blind. We knew the marketplace; we knew what’s going on with retailers. We went into this knowing that that was ahead of us. We also looked at the trends, [and knew] that we had to be disruptive, we needed to do things in a nonformulaic style,” Siegel said. “That’s why one may actually say this looks, feels and certainly smells almost more like a niche type of fragrance.”

It’s not niche because the U.S. retail partner at launch is Ulta Beauty, Siegel noted, but the team worked to make sure that every element veered away from celebrity fragrance territory. Ulta will carry the fragrance exclusively in the U.S. for a year in all of its doors doors starting on Aug. 28 and online at ulta.com (the chain will have more than 970 stores by the end of the year). It will also be sold on Parker’s sjpbeauty.com site.

“I always said that Lovely was a polite fragrance; she was welcome everywhere. I would say this is a sibling that won’t be excluded from events, but it’s a far more unpredictable personality,” Parker continued. “I still love Lovely and I’m nostalgic about it, but this is the fragrance I’m wearing every day. I’m not messing around or having affairs with other fragrances.”

While Lovely has top notes of mandarin, bergamot, rosewood and lavender, Stash’s are grapefruit zest, black pepper and sage. The latter is decidedly less feminine than its predecessor, with middle notes of cedarwood atlas, patchouli, ginger lily and pistachio and a base of olibanum, massoia wood, vetiver and musk.

“I don’t know if you have an affinity for body odor, but on some people it’s amazing,” she said with a laugh. “Part of it, too, is the warmth of a body and how do you capture heat? [Or] how do you capture [the scent of] a sweater that has been worn by somebody that’s absorbed musk or patchouli?”

She said the words that came to mind when creating Stash were body odor, church and leather. It’s inspired by a handful of men’s fragrances Parker would wear, often rife with vetivers and frankincense, also known as olibanum and one of the base notes of Stash.

Another factor that differentiates Stash from previous fragrance projects is social media and the speed at which the digital space allows one to launch product, especially when the person launching it has millions of followers. This is the biggest change since the introduction of Lovely, which took place seven years before Instagram came into existence and during Facebook’s earliest days.

Like any celebrity with a massive following who’s launched product using social media from Victoria Beckham to Kylie Jenner, Parker can rely less on traditional and more on new media with Stash. She will personally reveal the bottle on her Instagram account today, where she has 2.7 million followers @sarahjessicaparker. She’s already been teasing the reveal to generate buzz, including a post on Wednesday that read: “Precious, personal, my secret, come and find it. Friday. X, SJ.”

The marketing strategy for launch does account for print and TV advertising — ads will appear in the October and November books of Marie Claire, InStyle and Cosmpolitan and TV spots will air in Australia — but the bulk of promotional efforts are digital, according to Parker.

But like any business, developing and bringing fragrance to market doesn’t come without its challenges.

Parker compared these obstacles — she called the fragrance industry a “revolving door” — to those of footwear, which are more forgiving.

“The shoe category is not without complexity and intense competition, but it doesn’t feel quite as fleeting. The moment to achieve triumph is more forgiving. You have more time to sort it out,” she explained, saying when Lovely launched more than a decade ago, she had to seek out real estate with retail partners.

“Now Ulta is bringing us in. Instead of us fighting, there is a sense of ownership. They are taking more control of it; they have a whole plan and are anchoring this,” she said of the partnership.

Globally, the scent will be available in Boots, Debenhams and Superdrug in the U.K. and My Chemist in Australia. Industry sources project that Stash can do $25 million in retail sales during its first year.

The firm believes Stash deviates from the typical celebrity fragrance formula because of Parker’s commitment to the development of it, from concept to out-of-the-box promotions such as a global street-art campaign. Street art started appearing around New York earlier in August, with nearly 100 sidewalks in New York City and Los Angeles tagged with #ComeandFindIt in chalk art. Parker teased the street art on her Instagram account, too, which will lead to the reveal of the bottle this morning.

For Frankel, the proof was Stash being picked up by U.K.-based retailer Debenhams, which he said no longer launches or sells many celebrity fragrances. While they still carry ones that were previously bought, the retailer isn’t looking to add more celebrity scents, with the exception of Parker’s.

Tara Simon, senior vice president of prestige merchandising at Ulta, shares a similar view of celebrity fragrances. She confirmed that Ulta doesn’t have a “long list of celebrity brands we’re working with. It’s also not something we’re really looking for.”

She pointed to Ariana Grande as an exception at Ulta — both of her fragrances have exceeded expectations saleswise — and she’s confident Stash will fall into the same category.

“She [Parker] isn’t just lending her name to this. This is a real passion project for her. I look at her like she’s a brand founder, like Jamie [Kern Lima] from It Cosmetics,” Simon said, adding: “It feels artisanal to us, even though most artisanal brands are a collection of scents or superluxe. This feels luxe and chic, but it’s attainable and she wanted that. She intentionally made that decision.”