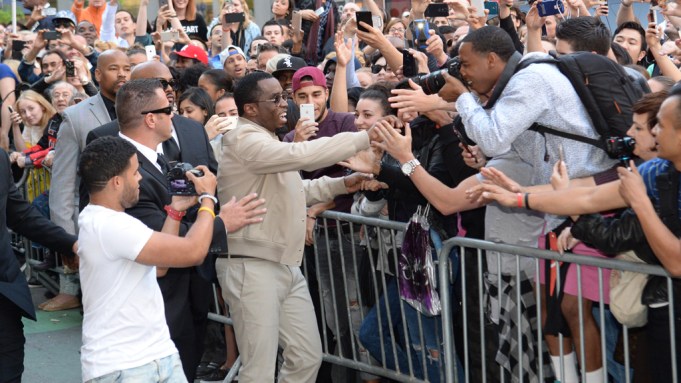 Ten years after launching his first fragrance, Sean “Diddy” Combs got back into the fragrance game Wednesday night at Macy’s Herald Square. Building on his longstanding relationship with the store — whose fashion franchise includes  17 categories ranging from shoes, suits, loungewear to coats, ties and jeans — the flamboyant entrepreneur launched 3 AM, his newest men’s fragrance. Appearing with Terry Lundgren, chairman and chief executive officer of Macy’s Inc. , Combs snarled traffic at 35th Street and Broadway as 2,300 fans — and seemingly just as many photographers — gathered. “It’s a good thing we know all the police officers around here, so everything’s cool,” Lundgren cracked.

Turning serious, Lundgren added that Combs has gone from having a celebrity brand to creating a lifestyle brand, most of which is sold exclusively at Macy’s.

Gesturing to the windows facing Broadway — all  of which were devoted to the fragrance, including one that was playing the racy (and heavily edited) ad in which Combs appears with his real-life girlfriend, Cassie. — Lundgren noted that “we don’t often give away our very precious windows at Macy’s. This is a serious give here. Love,” he grinned, gesturing to Combs. “I’m showing serious love with six windows here.”

Combs described how, as a child growing up in New York City, he would see the windows filled with brands like Calvin Klein and Ralph Lauren “It’s extremely important and humbling, and exciting, for me, because I worked here first as a stock boy and then as a cashier,” Combs told the crowd. “When it wasn’t busy, I used to daydream a lot, and I’d dream about days like this and things like this happening in my life. I knew I had to work hard for it. When I fell down I had to keep trying. I’ve had a lot of those peaks and valleys in my life, but I want to tell everyone out here, especially my native New Yorkers, if you hold onto your dreams and keep working hard, take it from a daydream to a reality. You can do it.”

Of the name, Combs told the crowd: “Anyone who lives in New York knows how crazy things can get at 3 AM. We all have our 3AM stories. So it’s really about the experience. And it’s a men’s scent, but the ladies love it too.”

Combs and Lundgren then adjourned to the inside of the store and slid behind a raised counter to do some business. Harkening back to his days a stock boy and cashier, Combs handed a bottle of the new fragrance to Lundgren, and the ceo flashed his shiny red Macy’s card as he completed the transaction.