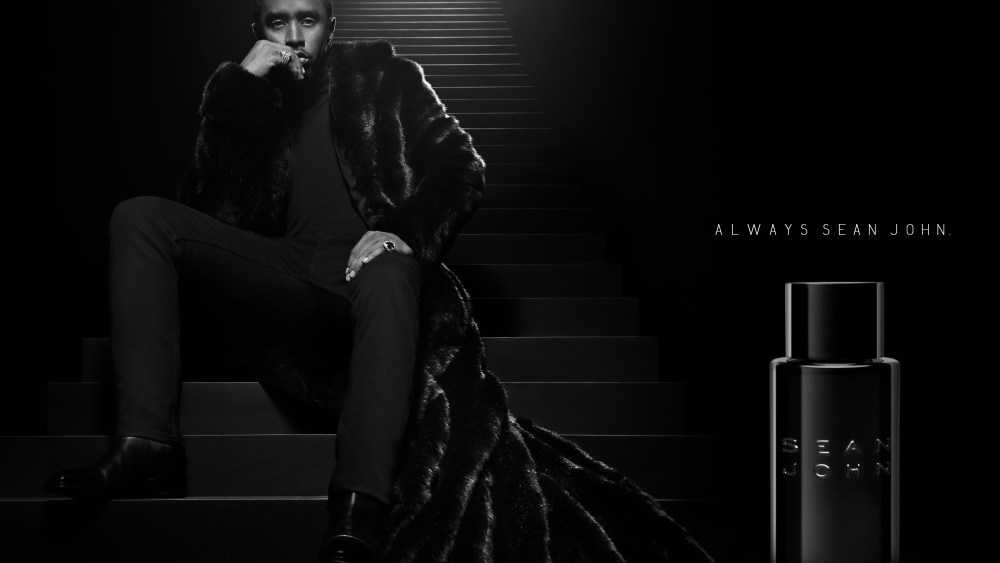 “I see it lasting generations,” declared Sean “Diddy” Combs, speaking of his brand during a break between photography sessions in Los Angeles for the advertising campaign to promote his newest fragrance,  Sean John.

Confidently dressed in black from head to toe, the past sales stumbles of his last fragrance, 3AM, don’t appear to faze Combs in the least as licensee Jacavi Beauty Group and distributor Parlux Ltd. embark on the latest launch. Twenty-three years since he founded Bad Boy Entertainment, 17 years since he made his fashion debut and 11 years since his first blockbuster fragrance, Unforgivable, it takes more than a misfire at retail to ruffle him.

As he did in the music industry, Combs is out to build a fragrance empire, not a one-hit wonder or in-and-out fad. “There are always a lot of different trends and sometimes fragrances smell like other fragrances. From the get-go, we tried to represent something that was cool and clean, and we always kept our signature bergamot in,” he said. “You can go in so many different directions with fragrances, but if you have a point of view, I think that’s how you build a brand.”

In the age of Insta-celebrities, Combs’ plodding and detailed approach impresses executives at Parlux, which, with Jacavi, took over Sean John fragrances in 2013 from former licensee the Estée Lauder Cos. Inc. “There is a lot of show business working with him, but, when you cut through all of that, there’s a man who knows how to reach his consumer and has very good instincts,” said Parlux president Donald Loftus. “He really seems to understand and enjoy the category, and takes an active role in the juice, the packaging, the bottle and the advertising. It’s really a part of him, and he understands all that it means.”

Parlux continues to piece together why the 2015 release 3AM, in Loftus’ strikingly candid admittance, “just didn’t work.” But perhaps it was partially because Combs the person and Sean John the brand were overshadowed by heavy-handed messaging. The Sean John fragrance distills Combs to serve him up in a straightforward manner to consumers. Combs summarized, “It’s about the evolution of the brand and the personal evolution that we all go through. It’s what the brand is about. It’s [gone] from Puff Daddy to Diddy to Sean Combs.”

In simple terms, Combs has grown up and so has his fragrance. “His franchise is always going to be cool, aspirational and sexy,” said Diana Espino, global vice president of marketing and brand development at Parlux. “That’s never going to change. But he has changed. Unforgivable was him in bed with two girls, and I Am King was about all men being kings. 3AM was a departure from the other Sean John pillars, but, we think, right now, with Sean John, it’s about him looking forward to this next phase of his life. At the end of the day, when the fashion show is over, when the party stops and the girls go home, he’s still Sean John.”

To capture Combs’ mature self-assurance, Firmenich’s Harry Fremont concocted a modern fragrance with top notes of bergamot, mandarin, watermint and black pepper; middle notes of nutmeg, violet leaves, cardamom and angelica root, and base notes of amber, vanilla, musk, sandalwood, amberwood and coumarin. “It has a sophistication that gives the vibe of a great men’s fragrance,” said Combs.  “It’s not too strong. It’s soft and clean, but it’s a memorable scent for when you are around a young lady or just trying to smell good.”

The ad for the Sean John fragrance is notable for what it doesn’t have. There are no women, no cars, no airplanes and no overt sexual references. Shot by Elton Anderson in July with a moody, dark quality, it centers on Combs looking contemplative while sitting on stairs and contains the motto, “Always Sean John.” Espino observed, “he is anchored on those stairs, and he has reached this pinnacle of life where you see this light above him. We wanted to make him and the product exude sexiness. He looks damn sexy. There doesn’t have to be a lot of peripheral things around to bring the sexiness. This will be just as big as an attention-grabber as it would be if he had many girls around him.”

The packaging is equally stripped down. The bottle is black, accented by black embossed letters spelling Sean John. Silver is added to the box to make it stand out on counter. “The packaging is simple, direct and elegant,” Espino continued. “I think it speaks exactly to where we see him right now. We don’t need to explain him. The bottle doesn’t need anything flashy. The response from retailers has been very positive, frankly much more positive than we’ve gotten for the other celebrity fragrances that we have.”

Loftus confirmed the early favorable reaction. He said, “The scent is well-loved. I think we will sell a second and third bottle as well as a first, so, hopefully, it will go on to be a classic.”

The Sean John fragrance will enter Macy’s in October at the price of $70 for a 3.4-oz. eau de toilette spray and $39 for a 1-oz. eau de toilette spray. Across a variety of categories such as fragrance, men’s sportswear, watches, suits, ties, headwear and children’s wear, Sean John has had a fruitful relationship with Macy’s (its clothing is exclusive to the department store) that’s helped the brand reach roughly $525 million in annual retail sales. “There would be no Sean Jean without Macy’s,” asserted Combs, who Forbes estimated netted $62 million last year from Sean John, musical ventures and a deal with Cîroc Vodka.

This year, music is definitely on Combs’ mind. He’s revealed his next album, titled “No Way Out 2,” will be his last. Before that album drops on a yet to be announced date in the near future, Combs has returned to the songs and artists that put him on the map with the Bad Boy Reunion Tour. For the current tour, he assembled an all-star roster of talent, including Lil’ Kim, French Montana, Faith Evans, Mase, Carl Thomas and Mario Winans. Despite the group of strong personalities, Combs maintains that it’s been the easiest tour of his career. He said, “They are playing more for a purpose now, and there is less ego all the way around and more appreciation for each other and what we are doing. It’s special.”