The singer is getting sensual and tapping into a younger demographic with her newest scent. 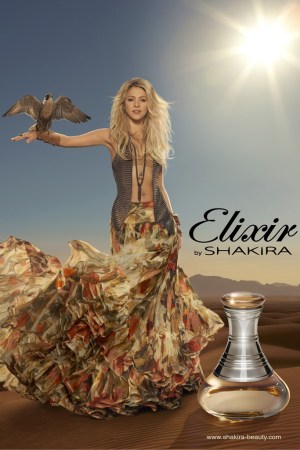 Shakira is getting sensual and tapping into a younger demographic with her newest scent, Elixir.

“After my first two fragrances, I wanted to do something different — I wanted to push the idea even further and develop a fragrance that would express my most sensual and exotic side, and Elixir is the result of that,” the entertainer said. “We worked on the concept of a ‘second skin,’ a fragrance that becomes a part of you.”

“This scent is aimed at a youthful consumer who wants to explore her power and her mystery,” said Jose Manuel Albesa, chief brand officer of Puig, Shakira’s scent licensee.

The scent — which was created by perfumers Alexandra Kosinski and Sonia Constant of Givaudan in collaboration with Puig perfumer Elisabeth Vidal — has top notes of neroli, white pepper and white flower; a heart of freesia, peony and apricot skin, and a drydown of white cedarwood, amber, benzoin, sugar cane and musk.

In the U.S., the scent will be available in about 19,000 doors. Kohl’s and Sears will have a two-month exclusive beginning later this month, after which the scent will enter Walgreens, CVS and other mass-market doors in September. It will also be carried globally in major markets, including Latin America, Italy and Eastern Europe, according to Puig.

The bottle, clear glass with a gold-toned neck, is inspired by classic apothecary bottles, said Albesa. Colombian artist Catalina Estrada designed the outer box, which features a fanciful design that incorporates birds, leaves and a teardrop shape on a pale background.

Industry sources estimated that the scent would do about $14 million at retail globally in its first year on counter, with about 20 percent of that expected to be done in the U.S.

The ad campaign, which features a sultry Shakira in a long skirt, was shot by Jaume de Laiguana in Morocco. Globally, both TV and print are planned.