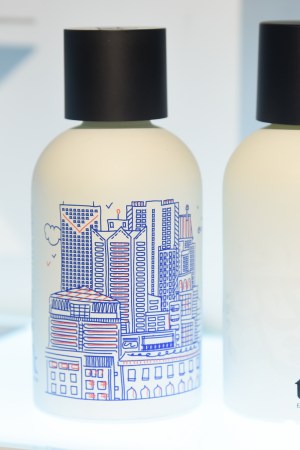 Roughly 1,000 people showed up for Al-Sabah’s personal appearance at Bergdorf Goodman on Tuesday. About 800 poured into his launch party at The NoMad Hotel — 200 in the penthouse, where the party, with its 15-piece traditional Kuwaiti band, was scheduled to be held — and 600 more downstairs who were barred from going up by fire regulations.

“Product-wise, the brand has a very sophisticated, unique and international appeal,” said Patricia Saxby, vice president and divisional merchandise manager at Bergdorf’s. “Our customers are well-traveled and very savvy to new exciting product in other parts of the world, so we think the brand will be very successful at Bergdorf Goodman.”

“We want to make sure that it does not feel or look or seem as a Middle Eastern collection,” Al-Sabah said. “It’s very contemporary, it’s very modern — it’s fresh, it’s young, it’s a new twist to niche fragrances. It’s very easygoing. We’re not sort of a preppy brand, we’re a very cool brand.”

Bergdorf’s beauty section houses 60 of the line’s fragrances, including one that is New York-specific and sold only at the Fifth Avenue store, inspired by the view from Al-Sabah’s Central Park-adjacent hotel room and the roses of New York. It’s called A Rose With A View. He also recently launched the line at Neiman Marcus in Beverly Hills, Calif., where Palm Fiction — a Pulp-Fiction-Palm-Tree name hybrid — sells as the exclusive fragrance. Intertrade Europe is the brand’s distribution partner.

“We loved the breadth of the brand, the different collections and the scents — literally something for everyone,” Saxby said. “The names and packaging were unique and catchy and that appealed to us as well.”

Al-Sabah’s travels are one of his main sources of fragrance inspiration, he said, and he whips up a new exclusive scent or fragrance collection for each city The Fragrance Kitchen moves into. He started the business in 2012, although he’d gone into the fashion business long before that. In 1992, he started a retailing operation in Kuwait, pulling in U.S. and European designers to the region. Eventually, he sniffed out an opportunity in beauty, partnering with Tom Ford in 2005 on fragrances including Arabian Wood, which was successful.

“It gave me the confidence to start my own business of fragrances,” Al-Sabah said. “I consider myself like a chef when I do the blending.” The process serves him the same way yoga or meditation serves others, he said. “Whenever I come back home I start blending fragrances to just give me this feeling of sere[nity].

“I am also a nose and I’m not a chemist. I just go with my gut feelings. I blend fragrances and then I pass my blends to labs to develop it,” he said. “I got the whole knowledge of blending fragrances from my grandmother,” Al-Sabah said. “She was doing all these blends for the family members.”

Al-Sabah is the son of the Emir of Kuwait’s first cousin.

Up next for the brand is luxury, scented chocolate, shaped like the blotters for testing out fragrances in stores. “We collaborated with a chocolate artist from Torino in Italy and we’re launching in a few weeks the conversion of scents into flavor,” he said. Boxes will retail for between $80 and $90.