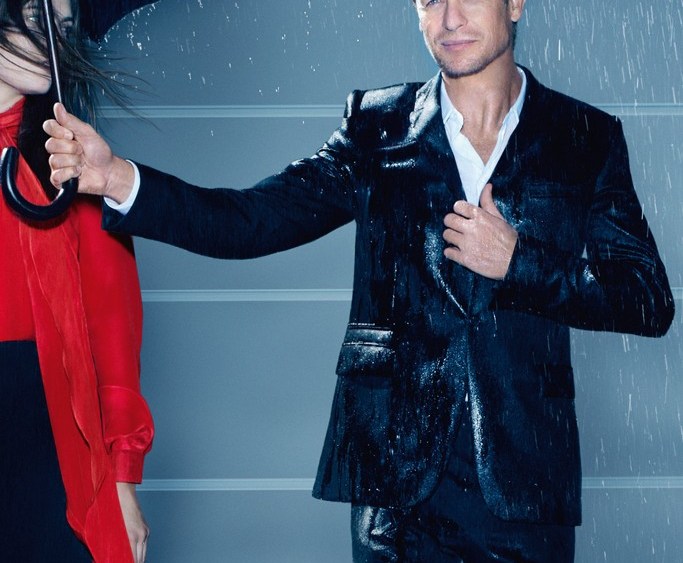 Being a gentleman is the role of a lifetime, literally, for Simon Baker.

His self-described old-fashioned upbringing, taste for well-made suits, widespread nice-guy reputation unusual in the dog-eat-dog world of Hollywood and the irrepressible twinkle in his eye are all the markers of a gentleman that convinced Givenchy the 43-year-old Australian actor was the right choice to front its men’s fragrance, Gentlemen Only. Launching in the U.S. in April at Macy’s and Dillard’s, Gentlemen Only will be available in 1.7-oz. and 3.3-oz. eaux de toilette for $59 and $78, a 3.3-oz. aftershave for $48 and a 2.5-oz deodorant stick for $21.

“I aspire to be a gentleman. I don’t necessarily consider myself the ideal gentleman,” said Baker, his modesty reinforcing his gentlemanly credibility. “It’s really about an awareness of yourself and yourself amongst the presence of others, how you behave, the use of manners and respect and restraint and dignity. I’m theorizing and it gets a bit heavy when I talk about that stuff, but it is really just taking the time to be considerate of other people.”

Gentlemen Only is Given­chy’s first new men’s fragrance in nearly four years. It’s meant to recharge Givenchy’s already-strong presence in the men’s fragrance arena. Givenchy’s men’s fragrance business is driven by its men’s fragrance pillars Play and Pi, according to Dorothée Boeuf-Hennequin, marketing director for Parfums Givenchy in the U.S. Industry sources estimate Gentlemen Only will generate 50 to 100 million euros, or roughly $65 million to $131 million at current exchange rates, at retail during its first year on counter.

“Gentlemen Only is another opportunity to solidify our position in the men’s fragrance category. Simon personifies the ideal gentleman and his high level of awareness is a perfect fit for the U.S. market,” said Nicholas Munafo, president of LVMH Moët Hennessy Louis Vuitton fragrance brands for the U.S.

Baker, whose police consultant character Patrick Jane in CBS’ “The Mentalist” is known around the world (as many as 15 million Americans and 6 million French television viewers watch the show weekly), is happy to use his exposure to propel Givenchy fragrance sales. “There isn’t a stigma attached to it in any way,” said Baker, who is also a spokesman for watch manufacturer Longines. “They are not trying to force me to be anyone that I’m not. I’m lending my likeness and my image to these companies in a way where I feel comfortable that they are not exploiting it.”

Givenchy initially broached the concept of a gentleman in 1975, when its founder, Hubert de Givenchy, stoked masculine elegance with the woodsy fragrance Givenchy Gentleman. Gentlemen Only is meant to bring Givenchy in touch with the modern gentleman, a global, connected, charming, polished and humorous individual who hasn’t forgotten time-honored values and isn’t afraid to care about how he looks or smells.

“We’ve gone through a period of time where we have broken down the notion that it is effeminate for a man to worry about how he looks, and I’m kind of glad about that,” said Baker. “It’s funny, I don’t like the expression metrosexual. It was a way of putting a label on the idea that is OK to be interested in how you look and present yourself without necessarily being gay. It felt like an excuse to me. I don’t care if you are gay or straight, it doesn’t matter. You are still a man.”

Gentlemen Only has top notes of green mandarin, pink pepper, nutmeg and birch leaf; middle notes of Texas cedar wood, patchouli and vetiver, and base notes of incense and cumin. Françoise Donche, the nose of Parfums Givenchy, explained that the scent was created to be obviously masculine and neoclassic, unlike the “gimmicky approach” she decried as ruling many male fragrances. She stressed that almost 70 percent of the scent formula is in the Texas cedar wood, patchouli and vetiver components.

“This is going to bring a very linear character and stable character to the fragrance,” said Donche, adding, “These three woods for us perfectly convey the idea of a truly seductive and confident person.”

The Gentlemen Only print ads are rooted in Givenchy Gentleman images from decades ago that depicted a woman under an umbrella held by a hand, which is a man’s hand although that man is unseen. The Gentlemen Only print ads, shot in Los Angeles by Patrick Demarchelier and breaking in the May or June issues of Details, GQ, InStyle, Playboy, Us Weekly and Cosmopolitan, envision Baker as the man who was earlier unseen gripping an umbrella that shelters a woman as he gets drenched.

Directed by Peter Lindbergh, television ads will air globally starting March in countries that include Italy, France, Argentina and Mexico. The TV ads stick to the umbrella theme, but they weren’t originally going to do so. Baker recounted that the ads were supposed to be about a card game between a woman and a man. “He’s got the cards to beat her, and he folds anyway, which I always thought was not really gentlemanly, but it is a little bit like being a sucker,” he said.

Baker preferred the umbrella scenario, even though he had to change into about four different suits through the course of the shoot because they kept getting wet. “How do you in 30 seconds or cut down to 15 seconds or in a still sum up something that illustrates gentlemanly behavior in a quick way, whether it is opening a door for someone or letting someone get into the car first?” he asked. “An umbrella was a very easy way to do that.”