The actress's latest fragrance could outperform her prior two scents with Parlux. 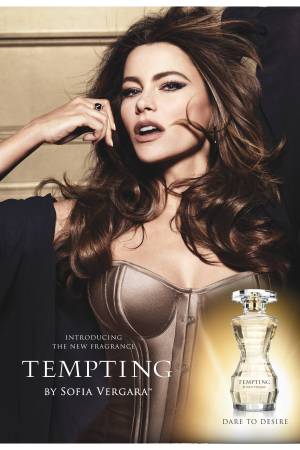 Sofía Vergara is flaunting her sexy side with new fragrance Tempting.

The third pillar of Vergara’s fragrance franchise with Parlux Fragrances Ltd., Tempting plays to the “Modern Family” star’s sensual strengths as a curvy Colombian bombshell with strong allure to both men and women. Rolling out to Perfumania this month before entering broader retail distribution in September, it’s priced at $32 for a 1-oz. eau de parfum and $55 for a 3.4-oz. eau de parfum.

“This one is probably the most Sofía,” said Parlux president Donald Loftus. “Everything you envision about her and see in her on ‘Modern Family’ is true about her. She’s absolutely beautiful, and she’s also very funny and witty. She uses her femininity to all of its advantages. This fragrance is an attempt to capture that for her fans.”

Speaking to WWD at an afternoon event held by Parlux and Beautycon Media on Friday at the Sunset Tower Hotel in West Hollywood, Calif., Vergara said each scent in her fragrance repertoire was developed for a different reason. Tempting was preceded by a namesake fragrance introduced in 2014 and last fall’s Love.

“I wanted my first fragrance to be something women could reapply several times a day without it feeling too much, cheesy or crazy. When I started my second one, it was during the time I was planning my wedding. I wanted to make it part of what was going on in my life. It’s a very sweet, romantic scent with a delicate smell,” she explained. “With this one, Tempting, I thought the next step is to make something sexy with more of an edge, something that women are going to have as their special thing. There are always clothes that you save for a special party or date, and I wanted this perfume to be like that. It makes you feel different and gives you power, that’s why I wanted to call it Tempting.”

Although she has three to choose from now, Vergara remarked she has no problem determining which scent to wear. “Sometimes I wake up and I’m just going to hang around the house, so I put something very light on. Sometimes I go out to lunch with my girlfriends, and I put something on a little more fruity or flowery that I know girls are going to like. If I’m going out on a date with my husband, I put something more interesting on,” she said. “It’s like lipstick. For whatever you’re doing, you can pick your perfume.”

Parlux produced a series of video vignettes with Vergara to promote Tempting that will be leveraged through social media and as digital ads. “You’re getting an intimate look at her life. It’s her in her home and getting ready to go out. She’s really good at sharing her life with her fans. That’s what makes her accessible and relatable,” said Pat Beh Werblin, vice president of advertising and public relations at Parlux. “She makes customers see Tempting in a new light. She has fun with it and encourages women to be empowered by their own sensuality.”

Despite being active on social media, where she provided glances of her lemon-themed 44th birthday party on Sunday, Vergara confessed she lacks digital prowess. “I’m a little behind with all of this because this is not my generation, but it is my son’s, who is 25, and my niece, who is 22. They teach me a lot about it and how important it is, how you reach people now more than ever. To me, it’s fascinating and hard,” she said. “The people that I work with are young and that’s good for me because, if they weren’t, I would still have a pencil and agenda for everything. I’m trying to learn.”

Consumer products are squarely in Vergara’s comfort zone. She designs a furniture collection with Rooms2Go, has linked with housewares company Shark Ninja to launch coffee maker Ninja Coffee Bar and is a spokeswoman for Cover Girl and Head & Shoulders. An apparel deal with Kmart ended last year.

“I am a product person. I’m like crazy. I love creams, makeup and perfumes. I try everything all the time. There is a lot I think I could do because of the way I live,” said Vergara, hinting at future product tie-ins. “Women are always asking me, ‘What do you do with your hair? Who colors it? What is that perfume? What is that lipstick? What is that shoe?’ That’s how I got the idea that I can create a business and, at the same time, make it easier for women and girls. There is so much out there, so it is great to have someone curating for you.”

If the success of her association with Parlux is any indication, companies are likely lining up to partner with Vergara, who Forbes approximated pulled in $28.5 million from June 2014 to June 2015 to tie with Kaley Cuoco for the honor of highest-paid TV actress in the world. Two years ago, industry sources estimated the fragrance Sofia would generate $25 million in revenues for its initial year on counter, and Loftus suggested Tempting’s sales could surpass Sofia’s at its debut. He said, “We are hoping it will exceed the others from the past. You never know, but it feels richer to me. I think it is a great gift-giving fragrance and will probably do really well during the holiday season.”