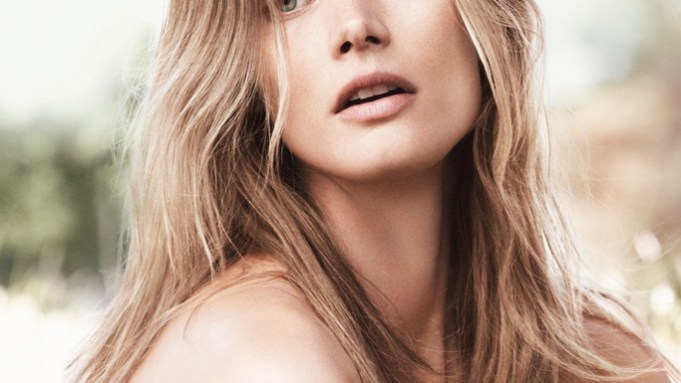 LONDON — L.I.L.Y, Stella McCartney’s latest fragrance — her second major scent — has some very homey inspirations: memories of a loving family and a mélange of countryside aromas.

The animal-loving designer, who grew up on a farm in Sussex, England, didn’t name the scent after anyone in particular; she chose the name for reasons far more intimate.

“It comes from my dad’s nickname for my mum: ‘Linda I love you,’” said the designer during the press launch at a cozy room inside Wellington Arch, which overlooks Hyde Park.

“The name is also from the lily of the valley ingredient — I love it as a flower, and so did my mum — it’s delicate, feminine, innocent. It was part of my bridal bouquet. But I also wanted to explore its darker, more masculine side. It’s a woodland flower and I wanted to capture the roots and the earthy side of it,” she said.

The heart notes are lily of the valley, while the base notes are oak moss. The top notes are — unusually — truffle. All are aromas McCartney has long loved.

“You can’t grow moss — you can’t plant it unless it wants to grow,” she said. “I find that quite sexy and sinister, to contrast with the lily of the valley.”

Master perfumer Jacques Cavallier of Firmenich, who worked with McCartney on her signature scent, Stella, and who also developed L.I.L.Y, admitted that McCartney’s choice of truffles was offbeat.

“The truffle was unusual, but I said OK to Stella,” Cavallier said. “We used natural extract of truffle, and I actually told the suppliers we were working with that the extract was for a restaurant! I didn’t want to let people know what we were doing.”

The designer said she loves the smell and taste of truffles, and finds it “sexy” when they arrive at dinner table ready to be shredded on top of scrambled eggs. McCartney quipped that Cavallier should consider himself lucky she didn’t ask for Brussels sprouts or cabbage notes.

McCartney also admitted that she is not a great fragrance aficionado. “I don’t wear a great deal of perfume. I find it too overwhelming. This fragrance is very much about trying to leave the woman who wears it a bit of self-expression. I wanted it very pure and uncomplicated,” she said.

McCartney added that, for her, the scent evokes: “A girl becoming a woman. It’s an early spring morning, crisp air on the flesh — and discovery.”

L.I.L.Y, an eau de parfum that was three years in the making, is the designer’s second major women’s fragrance. While the company declined to break out sales projections, industry sources estimate that the fragrance has a retail sales target of more than 20 million euros, or $26.8 million at current exchange, on a global basis during its first year on counter. McCartney’s licensee, L’Oréal, which produces and distributes her fragrances, will launch L.I.L.Y in the U.K. exclusively at Selfridges on Jan. 26 and roll it out to other retailers in the market on Feb. 15.

The scent will begin selling worldwide in March, and is set to launch in the U.S. in the second half of 2012. The fragrance will be launched in September throughout the 280-store Sephora chain in the U.S., according to Marc Rey, president of international designer collections at L’Oréal USA. He added that her first fragrance “resonated well with young women in this country. After the initial Sephora rollout, specialty store distribution will be explored, Rey said.

A body lotion and shower gel will be available alongside the fragrance.

Like the scent, the bottle — which has an Art Deco feel — is a mix of light and dark, feminine and masculine.

McCartney said the English cut crystal bottle reminds her of the sort of vases and tableware one would find at home, while the metallic frame lends a sharper and more masculine edge.

She said she finds the metal frame “architectural, like contemporary furniture.” The Stella McCartney logo appears discreetly on the side: “I was intent on not having in-your-face branding,” she said.

Ads will break in the February issues of U.K. glossies such as Vogue, Grazia, Glamour, InStyle and Harper’s Bazaar. Some of the spreads will include scent seals.

The campaign was shot in Kent, England, by David Sims. The details of the photograph — the lush, verdant greenness of the countryside in the background and the fresh-faced, natural look of the model — were meant to convey a feeling in keeping with the sweet and sexy nature of the fragrance. The ad stars the 34-year-old Polish model Malgosia Bela, whom McCartney chose for her maturity.

“I wanted someone who was not 14, and you can see she’s wearing hardly any makeup. You can see her freckles and skin,” said McCartney. “So many fragrances are ‘girl girly’ or ‘sexy sexy,’ I really wanted this one to be in the middle ground, aspiring and desirable.”