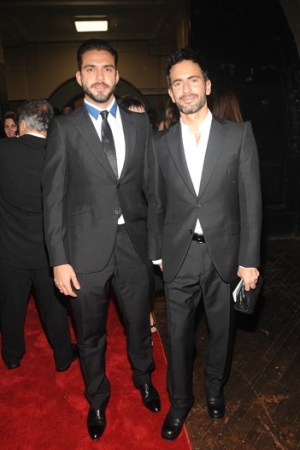 “I’m opening the show, sorry!” said late arrival Latifah with an apologetic grin as she sprinted down the red carpet, flanked by beefy bodyguards.

But others took a more leisurely stroll down the red carpet — especially an affable and accommodating Hoffman, who was accompanying his wife, nominee Lisa Hoffman. When asked how the FiFi’s differ from the Oscars, Dustin Hoffman replied, “It’s a much shorter red carpet! And Paris Hilton wows both of the shows, knocks ’em dead.”

Dustin Hoffman and Combs shared one thing in common, on what part of the body they like to sniff fragrance. “I never smell a woman’s wrist,” Hoffman admitted. “I always go for the neck, like Dracula.”

“I Am King has always been about the king in all of us, empowering — and I Am Queen is the same thing, only for women,” said Combs. “It’s celebrating that we are descendants of kings and queens, putting that positive energy out there.”

Combs won his second FiFi for I Am King – Sean John in the luxe men’s fragrance of the year category, making him — along with Jacobs and Hilton — one of the industry veterans among the celebrities present. And he gave one of the most generous, and lengthy, thank you speeches. He began by describing the experience as “humbling,” then how the process of fragrance creation is so “surreal — so methodical, so sensual, so precise” — that it made him realize how “the people around [me] are the people that really deserve to be up [accepting] this award.” He then thanked Estée Lauder, John Demsey, Diana Espino, International Flavors & Fragrances, Macy’s, Dillard’s and his Sean John development team. “And also I want to give a special thanks to my mother, who always made sure I smelled good when I left the house.” Finally, Combs walked off — but soon returned, interrupting Walsh, who was beginning to announce the next award. He had neglected to thank his p.r. man, Hampton Carney. “Hampton, I love you!” he called out before finally surrendering the microphone for good.

CLICK HERE TO SEE EXCLUSIVE VIDEO FROM THE AWARDS CEREMONY >>

Speaking of Walsh, not only was she there to hand out awards for Men’s and Women’s Popular Appeal and Men’s and Women’s Luxe scents, she was one of four celebrities in attendance also plugging her own fragrance — although she was keeping all of her details under wraps. “I can’t talk about it yet — it’s like the plotlines of our episodes [on ‘Private Practice’]. Literally, people are asking questions about the cliffhangers, and I’m like, ‘I don’t know!’ They don’t tell me anything until I show up on set and they’re saying, ‘Here’s what you’re saying.’”

Blige, on the other hand, was far more forthcoming about her latest project. In fact, she was one of the few celebrities in recent memory to tote her own fragrance to the FiFi’s.

“It’s called My Life by Mary J Blige,” she said. “It’s for women who are all heart, who just want to smell beautiful.” The fragrance will launch with a limited edition version in a Steuben crystal bottle designed by Blige, with proceeds from the sales of the bottles going to her charity. “I was involved with what it is — I don’t want people to go in the store and say, ‘Oh my God’ [making a face]. I want them to say, ‘Oh my gosh, she put her heart into that. It’s all me. It’s all love.’”

Full rollout will be in December, noted Steve Stoute, chief executive officer of Carol’s Daughter. “It’s Mary’s design. We worked with Firmenich [for the juice]. For Mary to be a partner in Carol’s Daughter, and make a fragrance, that’s a special thing. I don’t know how many times the celebrity is an owner of the company that is producing the fragrance. That’s a record-company mentality we’re bringing to the fragrance world.”

Hilton (who, like Latifah, wore Georges Chakra) was introduced by Neil Katz, chairman and ceo of Parlux, who described her as “a woman of many dimensions.

“Over the five years that Paris has been creating and marketing her fragrances, she has developed a thriving business that has contributed in a significant way to the fragrance industry as a whole,” he said. “She is one of those people who have made this [phenomenon] of celebrity fragrances the force that it is in our industry today.”

“Oh my gosh, this is so exciting,” gushed the hotel heiress. After thanking the industry, the foundation, Katz, her parents and her boyfriend (who brought his mother to the event), she signed off by giving a commercial. “Congratulations to all the other winners…and my new fragrance, Siren, is coming out next month, so check it out,” she said.

A spry Borgnine introduced himself to the room as “Tova Borgnine’s husband, Ernie.”

“Welcome this year’s retailer of the year, the partnership of Tova Borgnine and QVC,” he said, nodding to his wife and QVC executive Allen Burke. “Come on up here, honey — you deserve it, baby!”

Largely, it was an evening of notable couples. In addition to the Borgnines and the Hoffmans, Blige and husband Kendu Isaacs; Ignacio “Nacho” Figueras and wife, Delfina; Nicolas Mirzayantz, who squired his princess wife, Alexandra of Greece, and Harry and Laura Slatkin all made the scene. The Slatkins picked up a FiFi for Interior Scent Collection of the Year, while Blige presented two awards, Perfume Extraordinaire and the Future Fragrance Award, and Figueras presented the award for Fragrance of the Year — Private Label/Direct Sell.

Among the old industry hands was a new face. Carol Hamilton, who only recently was named president of the Luxury Products Division of L’Oréal USA, was making her first appearance at the FiFi’s, despite having been in the industry for 35 years. “I had to see what it’s about,” she said.

Jacobs, who accepted the Hall of Fame Award, won kudos from many in the crowd for the brevity of his acceptance speech — thanking, in large part, Claire Fermont Langlais, senior marketing director for Marc Jacobs fragrances at Coty Prestige — although he got more detail on the red carpet. “It’s nice to be here and to be honored,” he said. “We’re about to launch another fragrance, so it’s always nice.…I’m very pleased with the new one [Lola], and I’m very happy with the success of Daisy.” (Cute literary bit: Daisy Marc Jacobs was named for Jacobs’ dog, who in turn got her name from Daisy Buchanan of “The Great Gatsby” fame.)

When all the results were tallied, Coty Inc. led the pack with six awards, while the Estée Lauder Cos. Inc. nabbed four and Elizabeth Arden Inc. picked up three.

Men’s Scent Feature: Elle for “This Year’s Model: What a Boy Wants”

Technological Breakthrough of the Year: Mane USA for Aquafine

Best Media Campaign of the Year Women’s: Sensuous — The Estée Lauder Cos.

Retailer of the Year: QVC and Tova Borgnine