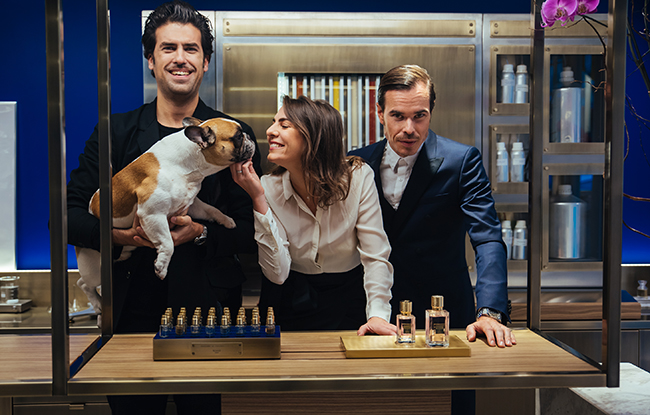 NEW YORK — Brands like to talk about giving consumers a buying experience, but Ex Nihilo puts them to work, making them mix their own.

The three-year-old company, which launched in Paris in December 2013 and ambitiously opened a freestanding store at the same time on Rue Saint-Honoré, is sharpening its focus on the U.S. market. One of the buzziest names in indie fragrance to hit the scene since Byredo and By Kilian a decade ago, the Paris-based Ex Nihilo is relying on personalization to make a mark on an increasingly crowded category.

In the U.S., Ex Nihilo is already carried in Saks — the current three doors is set to expand to 30 doors in the next three to five years — as well as The Webster in Miami and as of last month, Forty Five Ten in Dallas. Last fall, Bergdorf Goodman picked up the collection, including a custom-made Osmologue machine that allows for on-site mixing of custom perfume. The goal is to open a second freestanding store in the U.S., too.

Cofounders and best friends Olivier Royère, Benoît Verdier and Sylvie Loday, aren’t looking to do retail theater — they just want to give the customer a special experience.

“It was funny, it was like, ‘Who are they?'” Royère said of the response to the company’s decision to open a store right away during an interview in the brand’s space at Bergdorf Goodman’s beauty floor. “It was walk or die — and we walked.”

“One day we were next to Gucci and Guerlain and we said, ‘Here we are!'” Verdier interjected.

Being privately owned allows founders to do such things, Royère pointed out, adding that him, Verdier and Loday want to expand their own way — without help from anybody. And although they might be taking an alternative route — simultaneously launching a high-end fragrance brand and retail store from obscurity that sells $400 bottles of perfume — the three have a clear vision.

“We put experience in the middle of everything,” Royère said. “The challenge was doing something French.”

Rather than a display of splashy theatrics — there aren’t levitating bottles of perfume like the ones Viktor & Rolf have planned for their Magic fragrance collection launch at Saks early next year — Ex Nihilo is using its Osmologue machine to let consumers in on the perfume-making process.

It is a differentiator from the brand’s indie peers, including Le Labo, which has also become known for its personalized fragrances. But Ex Nihilo has taken it a step further, coining its use of “demi bespoke” services that are done right in front of the customer.

“[We said] let’s do something that goes back to the roots of luxury and try to rejuvenate it to bring an exciting, innovative and entertaining experience…[with] something you should be able to personalize,” Verdier said, pointing to the Osmologue, which he likened to a shrunken, “sexier,” version of the ones that exist in perfumer’s labs and fragrance houses. “Guerlain or Cartier has it [this service], but in France, and it’s so expensive.”

Verdier said there are nine base fragrances in vases de senteurs, or scented vases, to choose from, including the brand’s best-selling Fleur Narcotique, a fresh floral. During the process, which could cost from $365 to $415 depending on ingredients, each is “mixed, twisted and invented” — but without betraying the original.

Verdier and Royère did a demonstration of the demi bespoke service they offer, which is only available at the Ex Nihilo store in Paris, Harrod’s in the U.K., Saks in Miami and Bergdorf Goodman to keep it “super destination.”

After selecting Fleur Narcotique as the base, Verdier pulled out a tray of tiny bottles containing a slew of accords, including Rose of May, orange blossom, jasmine, peony, lychee and Bois d’Hiver, or “Winter Wood.” After much deliberation and input from Royère — a top note of orange blossom would make the scent “immediately pop in your face” but jasmine is “quite sunny” — Verdier decided to use Rose of May to put his own spin on Fleur Narcotique.

At this point, an Ex Nihilo associate weighed and poured a quantity of base fragrance into a beaker and put it beneath the spout of the Osmologue. A proprietary iPad technology then transferred the formula to the machine — all formulas are inside the Osmologue already — and it dispensed the ingredients into the beaker with the concentrate. Next, the beaker was moved to a magnetic plate and a little magnet was dropped inside the beaker. Once engaged, the magnet started to spin, and within one minute, the liquid was emulsified. The magnet was removed, the finished fragrance was poured into a bottle and a pump placed inside and sealed by hand. Customers who actually experience the service are given the option to select one of four semiprecious caps, including a purple, exclusive to Bergdorf Goodman mother-of-pearl topper.

Lastly, once someone gets their scent, it’s recommended they keep it in the foam box it comes in — that protects from light and air — for at least one week to ensure that the blending is “perfect.” They’re also given a certificate of authenticity, and the customized formula is logged into the brand’s database for easy reordering.

But this is only a slice of Ex Nihilo’s business.

Harrod’s in the U.K. was the first department store to pick up the line, and a slew of big name, global retail partnerships has followed, including Harvey Nichols in the U.K., Galeries Lafayette in Paris and Tsum in Moscow, to name a few. Entry into the Middle East will take place next year, including Bloomingdale’s and Harvey Nichol’s in Dubai as well as a retail door in Kuwait.

These retailers are seeing success with Ex Nihilo’s stable of a dozen scents, especially Russia, which drives about a third of the overall business. These include the main collection of nine unisex fragrances, priced from $225 to $325, as well as the Les Interdites Collection — the feminine collection. In February, Devil Tender — the third in the Les Interdites range — will be introduced, and come spring, a masculine collection will hit counters. The brand saw the addition of an even higher priced Amber Sky eau de parfum in July, retailing from $370 to $525, and a Last D’Epices candle and a Les Sublimes Essences collection of two oils, retailing for $75 and $475, respectively, rolled out for holiday.

“We put our balls on the table….We put all the money we had into the flagship we wanted to create. We wanted people to experience the brand in a different way, and it happened,” Royère said.