Off with her head? It’s part of the deal with the star’s new scent, Pink Friday, which will roll out at the end of this month.

By Julie Naughton and Pete Born on September 7, 2012
View Slideshow 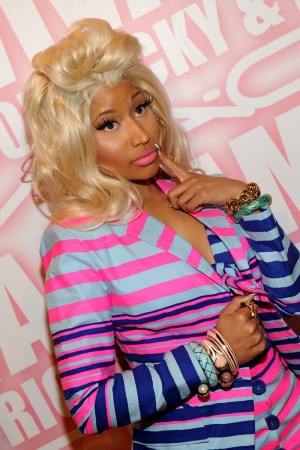 Off with her head? It’s part of the deal with Nicki Minaj’s new scent, Pink Friday, which will roll out at the end of this month.

That’s because the scent’s unique bottle is in two pieces: a bottom part resembling a torso clad in a white bustier with a gold nameplate necklace, and the top with a silver head complete with long pink plastic hair hanging over the torso’s shoulders.

Minaj, who spoke with WWD as she was leaving rehearsals for Thursday’s MTV Video Music Awards, was bubbling with enthusiasm over the bottle — which emerged from an early creative meeting with Elizabeth Arden Inc., her fragrance licensee.

“They asked me, ‘What do you feel is a real extension of you?’ And I said, ‘There’s nothing more synonymous with Nicki Minaj than a pink wig. If I could get that on the bottle, that would really make me feel like this fragrance is a part of me — my history and my future.”

The team then returned with a sketch. “I almost passed out, I was so excited,” Minaj said. “I was thinking to myself, it’s going to be traditional, it’s going to have a regular bottle, a regular top. But I had never seen anything like this. My fans are always anticipating what I’m going to do — they’re used to me surprising them with craziness. I know my Barbz — what I call my fans —are going to freak out about this. It’s like a doll, almost.”

The outer packaging is equally eye-catching: ombré shades of gold, pink and purple, trimmed in a gold-chain motif and adorned with a back-panel shot of Minaj.

“I’ve always been the token girly girl, ever since I can remember,” said Minaj. “I was experimenting with all things having to do with image from the time I was little. I feel like the fragrance is a natural progression, because it tells another part of the story.”

The scent, created by Minaj with Firmenich, is classified as an intoxicating floral musk. Top notes are of star fruit, Italian mandarin and succulent boysenberry; the heart includes lotus flower and starry jasmine petals, and the drydown is of vanilla, caramelized pear, musks and woods.

Minaj said she was aiming to create a scent that was different from anything she’d ever worn before. “I wanted it to be a brand-new, exciting addition to the market. It has an amazing combination of a playful feeling as well as a sultry feeling that lingers on. It smells like a fantasy to me.”

The scent will be carried in about 2,000 department stores in the U.S., including Macy’s, Dillard’s, Nordstrom, Belk, Bon-Ton and Boscov’s. In Canada, it will be in Shoppers Drug Mart and The Bay.

An extensive digital and social media campaign, which Arden partnered with Kirshenbaum Bond Senecal and The Media Kitchen to create, includes a Web site, nickiminajbeauty.com, said Noreen Dodge, global marketing and creative development consultant for Elizabeth Arden, adding that TV and print are both part of the plan. “We have extensive TV planned for holiday,” said Dodge. Minaj has already started teasing information about the scent to her more than 14 million Twitter followers, Dodge pointed out, and a limited-edition and second pillar scent are also in the works. The print campaign was shot by Howard Huang, while the TV was directed by Benny Boom.

While Minaj and Arden declined comment on sales projections, industry sources estimated the scent could do $30 million to $40 million in global retail sales in its first year on counter. The advertising and promotional budget could top $15 million in the same time frame, said industry sources.

“Clearly, we are getting very aggressive in the celebrity category, and strongly expanding our footprint in that arena,” said Joel Ronkin, executive vice president and general manager, North America for Arden. “We think [Nicki] is the perfect partner for us as we move forward. We think she has tremendous potential as a brand. The retailer response has been phenomenal. One, they liked her as a brand. And then, when they saw the bottle, and they smelled the fragrance, the reaction was incredible. She’s a global phenomenon and so behind the project that support has come through loud and clear to the retailers, who are also giving us tremendous support. We think it will be a great brand for us on a global basis.” Minaj will do a Macy’s personal appearance later this month at the Herald Square flagship, although a specific date hasn’t been confirmed, he said.

Earlier this year, Minaj teamed up with MAC Cosmetics’ Viva Glam charity effort to create a rosy pink lipstick bearing her name. “I feel like I have a knack for picking out good beauty stuff,” she said (and according to MAC, her Viva Glam offering has been the brand’s most successful). Saying she’d like to get further into color cosmetics, Minaj added, “I’m thinking about who I want to partner with because it’s got to be something with quality. I don’t want to do something that doesn’t represent me or that doesn’t feel rich. I want people who like my makeup to feel like their makeup would look exactly the same way. I think I’d be the happiest girl alive.” What would her line include? “Pink lipstick, pink blush, huge eyelashes. My fans ask about my eyelashes on a regular basis.”

Minaj is also said to be one of the new judges on American Idol — “That one, I don’t have any comment on,” she said coyly.

But she’s got plenty else to keep her busy. “I’m going to be dabbling in the clothing industry [she declined to say with whom], so I’ve been looking at a lot of sketches and books. I’m also rereleasing my ‘Pink Friday: Roman Reloaded’ album as ‘Pink Friday: Roman Reloaded The Re-Up,’ which will be out in November. I’ve got a new single coming out next week, and I’m going back on tour in October — I leave Oct. 19, and my first show in the U.K. is the 21st. It’s my first arena tour, so I’m superexcited about that. I can’t say that I’ve really had any time to rest, but it’s going to all be worth it in the long run.”

Australia and New Zealand will follow dates in the U.K. and Ireland, she said.

Minaj is also itching to do more film work. “I loved doing the voice of Steffie for ‘Ice Age,’” she said. “I think at the top of next year, my calendar will calm down a little bit to allow me to do that. I would love to have the opportunity to do that. I get asked a lot, but I don’t ever want to commit to something that I can’t give myself to fully, so usually I say no, it isn’t time yet. But next year I’d like to spread my wings.”

Any roles she’s attracted to? “In terms of animation I’d love to do anything, but in terms of roles, so many things have caught my interest. I’d love to do an action film, because I know that’s so far-fetched and people would expect me to play a different kind of role — I don’t think people look at me and see Lara Croft,” she said with a laugh. “But you never know!”

So, is Minaj actually voting for Mitt Romney (as she tweeted earlier this week), or did she simply want to stir up controversy? She’ll never tell, declining to mix perfume and politics.