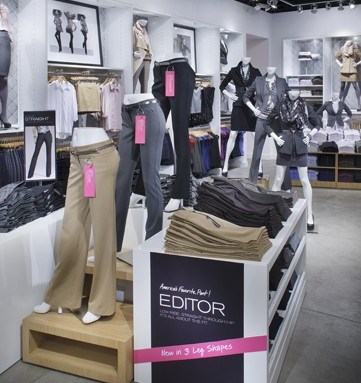 As most retailers plod through the fall and back-to-school seasons, Express sees itself on a faster track.

“There is no question we are on the upswing,” said Fran Horowitz, executive vice president of women’s merchandising and design for Express. “We have already delivered lots of great chunky sweaters with lots of new shapes — flyaways without closures, cocoon shaped, cardigans — things women have already told us they’re excited about. It’s where we’ve gained great momentum in the past 18 months. And, of course, we have our pants business, which is really a sweet spot for us. The Editor pant is terrific.”

During an interview at the company’s New York design studio, where there is a team of 85 people involved in women’s and men’s designing, sourcing, production and public relations, Horowitz depicted Express as a company on a roll, headed to “a very strong season,” particularly with sweaters and pants as well as jewelry and dresses.

“When a customer thinks about buying a dress for any occasion — to go to work, to get dressed up at night or just to hang out — we have really created a destination for her.”

The two-in-one dress, she said, is a standout. It’s constructed with one fabric on top and another on bottom to cast the impression of a blouse and skirt outfit. With jewelry, pieces with a mix of stones or burnished metals in varying colors are also bestsellers.

While putting its stamp on certain categories, ultimately the goal at Express, she explained, is to present a fully rounded collection through continued product development and category launches, and to provide customers with a spectrum of wardrobing options.

Through the 30 years that Express has been in business, there has been wear and tear on the brand and its image. But there also has been some healthy brand rebuilding recently, sharpening the focus on the target customer and an urban, cool image. There’s an edge to the look, with tight skirts that show a lot of leg, and cropped military-style leather jackets with epaulets. But not too much of an edge: There’s also an element of glam with lots of festive ruching and glittery pieces. “Express is a sexy, sophisticated fashion brand. That’s who we are,” said Horowitz.

While cautious about giving away too many details about product development initiatives, Horowitz did make clear that broadening the business has been the priority since Express was purchased by Golden Gate Capital from Limited Brands Inc. in 2007. Back then, the perception was that the best days for Express had passed and that the competition was stronger.

However, as Horowitz said, “Golden Gate gave us a wonderful platform to focus on many opportunities that we hadn’t focused on under our previous owner. We’ve been known as an apparel brand, and we were much more item driven. But today, our biggest focus is dressing women head to toe. We believe we can complete her look in total. We are head to toe, outfit driven.”

Any sense that Express was down for the count was all but eradicated in May with Golden Gate’s successful initial public offering of the specialty chain. It cast a new light on the $1.8 billion business and its potential to reclaim the momentum it hadn’t seen since the Eighties and early Nineties. The chain’s performance for the first half was strong.

With newfound confidence, the product development machinery has been revved up. “We are currently testing intimate apparel and swimwear,” said Horowitz. The swimwear and intimate apparel are sold online and in select stores. “And we just put in a 10-store test in shoes,” which are also online. “We’ve been in the hanging shoe business, which is a much more price-pointdriven sandal and flat business. I’m speaking about going into boots and shoes and creating a true shoe business, both in store and online.”

Testing new products has become a “very big deal,” she said. “We test 75 percent of our product before we bulk it. It’s a very clear strategy that’s always been a piece of the business, but not to the degree that it is today. For a specific set of stores and for a specific time, we read and react, and there are tests going on all the time in different categories. We learn, study and take it all in before we make any big decisions.”

Express recently entered the beauty business with a lip gloss, called Express, launched a year ago, as well as a fragrance, called Love Express, launched this month. Holiday gift sets are being developed, including fragrance and lotions.

“We have a plan in personal care,” said Horowitz, who joined Express five years ago as vice president and merchandise manager, rose to senior vice president and general merchandise manager and was promoted to her current job in December 2007. Earlier in her career, she worked at Bloomingdale’s for 13 years in various merchandising roles and had buying stints at Bergdorf Goodman, Bonwit Teller and Saks Fifth Avenue.

Aside from Golden Gate bringing a new agenda, Horowitz believes another pivotal moment for Express was when Michael Weiss returned to the business, as president and chief executive officer, in 2007. He left Express in 2004, when it was a division of Limited Brands, but returned when Golden Gate took over.

“Michael helped us focus on who our customer is,” Horowitz said, explaining that the merchandising effort revolves around editing for a 24-year-old woman, postcollege, starting her career. However, that merchandise edit point of view targets a range of customers from 20 to 30 years old. “That’s where the company has lived for years,” long before Golden Gate became the owner, she noted.

And it’s a good place to be. Given the target customer’s age, most likely, “she’s not having to deal with alimony or payments on the house,” Horowitz said. Though she may earn less than women who are older and have more work experience, “she has a little more expendable income and is not afraid to spend.”

Other specialty retailers also target women in the same age range, but Horowitz sees an essential difference: “We cater to her whole lifestyle. We don’t pick a specific lifestyle like many of our competitors in the malls do. At any given time, we have wear-to-work, party, casual and jeanswear, and we stay very true to that. We believe in a balance. Balance is the word I learned from the minute I got into this business. It’s probably the most important word I could teach anyone coming in today. Distortion does not work. Balance is the key.”

Express, Horowitz said, knows where to draw the line. “We believe we offer fashion that is appropriate for the age we are targeting. When she is ready to move on, we let her move on. We do not have any desire to change who we are or to continue with her” when she gets older and seeks different fashion.

“That’s why I think we have been successful as long as we have, because we stay true to our target and if she wants to come back and buy a piece to update her wardrobe, we would love to have her, but we are not chasing her,” Horowitz said.