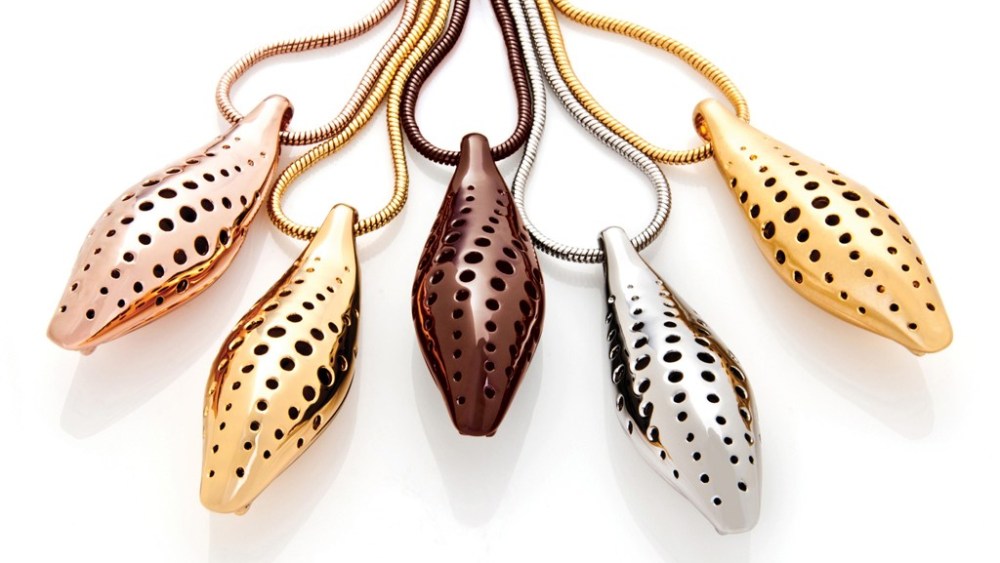 LOS ANGELES — Fragrance jewelry can be awkward merchandise to sell without a clear home in either the beauty or the accessories section at stores, but Lisa Hoffman is out to make it a must-have in both and has reeled in jeweler Tom Binns to help her do so with a new collaboration.

Binns is the first of several jewelers of differing price points and styles Hoffman said she plans to partner with to take “the whole concept up to another level. I’ve always been a huge fan of Tom’s jewelry. I was actually introduced to his jewelry when my husband [Dustin Hoffman] gave me a gift of one of his pieces. My husband was introduced by one of our daughters, who is a big fan,” she explained.

About a year ago, Hoffman visited Binns in his studio in the Los Angeles neighborhood of Venice to discuss with him the possibility of creating jewelry intended to carry scents. She said he was intrigued by the notion that jewelry and fragrance are worn on the same places on the body: the neck, décolletage and wrist. “What was so wonderful and thrilling for us was the organic connection between jewelry and fragrance,” said Hoffman.

It was a complicated process to get from idea to execution. In jewelry pieces, Hoffman’s scents — Japanese Agarwood, Madagascar Orchid, Tunisian Neroli, French Clary Sage and Tuscan Fig — are incorporated using beads made of wood flour, a sustainable agricultural by-product. Binns had to design pieces that could be opened repeatedly for fragrance wearers to add the beads and allowed the fragrance to disperse. The pieces also had to undergo scrutiny usually reserved for cosmetic packaging to guarantee the fragrance beads didn’t react badly to metal.

Ultimately, Binns settled on pod-shaped curved pendants that encased the beads and permitted scent to escape with Champagne bubble-like openings. “The visual was a timeless, classic design with a unique way of wearing a fragrance. It is a traditional practice in Eastern countries of having jewelry that incorporates fragrances. I wanted to take that medium and translate it into a modern language,” he said.

The $250 pendants, which are available in five metal varieties that correspond to Hoffman’s five scents and are paired with jars of refillable fragrance beads, will sell starting this month at Binns’ store in New York and on lisahoffmanbeauty.com. Cuffs for $300 and earrings for $200 will follow in November and January, respectively.

Hoffman, who launched Lisa Hoffman Beauty fragrance jewelry pieces in 2011, emphasized fragrance jewelry appeals to women because it can be taken off at times when fragrance isn’t desirable (such as during an exercise class) and put back on when it is (like for a date.) “There were situations throughout the day where I wanted more fragrance or less fragrance, and I wasn’t near a shower, and my fragrance hadn’t worn out. It filled this need for me,” she said. “The more I talked to women I learned it would fill a need for so many of us who were running to workout classes or to our jobs.”

Although store buyers may be uncertain about fragrance jewelry if they aren’t familiar with it, Joan Sutton, vice president of development at Lisa Hoffman Beauty, underscored it has the potential to engage jewelry customers with fragrance and vice versa. “Lisa is breaking a boundary here bridging together two different markets — jewelry and fragrance. So, marketing wise, it is interesting because it crosses categories. You are penetrating different customers,” she said. “That is really exciting for the industry because it means more business.”