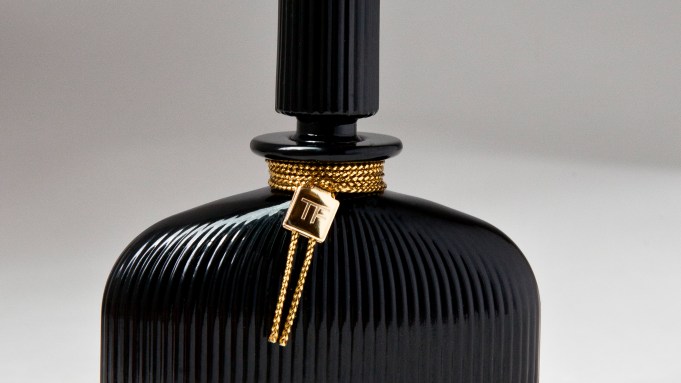 According to sources, the company’s sales volume will hit $500 million by the fiscal year that ends June 30, a 29 percent increase from 2015’s revenues. If sales continue on their current trajectory, the Estée Lauder Cos. Inc.-owned brand is expected to hit $1 billion in sales by 2020. The firm is adding $100 million in volume a year and by fiscal 2017, Tom Ford Beauty will have doubled in size since 2014.

“We have a glide path to basically double this business in a very short time,” confirmed John Demsey, executive group president of Estée Lauder Cos., during an interview in his office at the company’s headquarters here. He is careful not to speak on behalf of Ford, who is finishing up his second feature film, “Nocturnal Animals,” which is slated for release this fall (“The only person who can speak for Tom Ford is Tom Ford,” he said with a laugh). The executive also declined to disclose or confirm sales figures.

But he first and foremost credits Ford as the reason for the brand’s success. The designer is equal parts compelling and aspirational, Demsey says, and has managed to build an audience that’s just as much male as it female.

“[It’s the] evolution from signature fragrance to full Tom Ford beauty house, and the way that that evolution is taking place is also a big driver of growth. It’s not just singular-category growth, it’s expanding the franchise in existing locations,” Demsey continued. “It’s different than a big designer fragrance — [which has] TV advertising and 30,000 points of sale. It’s truly a luxury play in a full beauty play, and not in the ‘designer-fragrance-promotional-dynamics’ [way] that defines most of the world right now.”

That’s all thanks to two words: Black Orchid.

It is Ford’s landmark. He began to build his beauty empire with the scent, which he released in fall 2006 as the anchor of his Signature fragrance collection.

In spring 2007, Ford debuted Private Blend, a collection of 12 eau de parfums that were all released simultaneously. This was a departure from the way he started the brand several months earlier, which was focused on the single product Signature scent (also the industry norm). Ford also upped the price point. Each Private Blend cost about twice the price of Black Orchid, starting at $220 and going up to $535 for a 250-ml. size. Today, there are 24 Private Blend fragrances.

Tom Ford Beauty introduced lipstick in 2010; a year later, a full range of color cosmetics, and in 2013, added men’s grooming.

While the company is cagey about calling this year an anniversary, the release of Black Orchid a decade ago was a turning point for Ford — and for the entire market.

The appeal of the indie and niche fragrance market still had yet to reach the mainstream consumer then, both in terms of mind and wallet share. This was a time when designer fragrances were flourishing (Narciso Rodriguez For Her and Euphoria Calvin Klein both received Women’s Prestige Fragrance Foundation Awards in 2006) and the popularity of celebrity scents was at an all-time high. While people like Frederic Malle and Serge Lutens were first to blaze a trail with niche fragrances, Ford was arguably the first to take artisanal fragrances and grow them on a significant scale. He turned niche into mainstream.

Today, the Signature range contains 10 scents, and has expanded to include Noir and Velvet Orchid. Prices for 50-ml. Signature scents are $98 for an eau de toilette and $115 for an eau de parfum. Next month, Orchid Soleil — the latest addition to the Orchid family — will join the lineup. It’s an ode to the successful Private Blend Soleil Blanc eau de parfum that came out in March and corresponding Soleil makeup collection that launched in spring 2014. The white opaque fragrance bottle emblazoned with the brand’s signature gold branding became the number-one selling Private Blend launch ever.

To fete 10 years of Black Orchid, the brand is releasing 10 exclusive products throughout July and August, many of them based on original Orchid ancillaries that Ford created for the original launch. A Black Orchid solid perfume, lip color and Nightbloom gold powder as well a Velvet Orchid solid perfume, lip color and Nightbloom pink powder will hit retailers in July (and go on pre-sale at tomford.com June 21).

In August, Black and Velvet Orchid perfume atomizer sets will be released, as will a limited-edition Black Orchid Lalique Edition that retails for $990 (only 1,000 were made).

Two new campaigns will also hit print and online in August: one for Black Orchid, featuring model Mica Arganaraz and shot by Nick Knight, and another for Orchid Soleil with Daphne Groeneveld, the face of the Soleil makeup collection.

Guillaume Jesel, senior vice president and global general manager of Tom Ford Beauty, said the connection between the makeup line has brought increased attention to the fragrance. Soleil’s 32 stockkeeping units were originally released as a limited collection due to its summery ivory and gold packaging that would “come in and come out” of retail. But once Ford suggested the company transition Soleil into a permanent part of the cosmetics collection in spring 2015, the franchise grew 10 times. Soleil did $3 million in sales during fiscal 2015 and in 2016 will drive $30 million, according to industry sources.

“It’s the first cross-category franchise that connects makeup with fragrance,” said Jesel. “At the top of the pyramid is the private-blend fragrance…and it has a cosmetics line in the center.”

While today sales from the Orchid franchise comprise roughly one-third of the overall business, or about $150 million, Tom Ford Beauty is now much more than Orchids. Two-thirds of sales come from non-Black Orchid related products.

Tom Ford Beauty defies industry norms as it relates to the breakdown of sales within the business. “When you look at a lot of the designer brands, you don’t see a business with so much traction in color, high-end fragrance and the signature scent. Usually someone overindexes in one thing,” Demsey told WWD.

“The net-net of it is that we have a balanced business between a real luxury brand and a pillar of men’s and women’s fragrance,” Demsey continued. “You don’t really see a brand that has a luxury tier like this at this price point competing against the artisanal play, which is what the whole fragrance industry is moving towards.”

Jesel maintained that revenues are evenly split between Signature, Private Blend and makeup. This is almost unheard of in an industry where a hero product typically carries the weight of sales.

He noted that within fragrance, there is about an even split between Signature and Private Blend fragrances, even though the latter has a smaller distribution (one-tenth of its Signature counterparts), is significantly more expensive and is not advertised.

Signature is sold in 7,000 doors, which is a little more than a quarter of the estimated 25,000 worldwide prestige doors. Private Blend is carried in 800 doors globally and makeup in just 300. Beauty is also sold in all 32 freestanding directly owned and operated Tom Ford boutiques.

Jesel said that North America and Europe are tied for the brand’s largest markets, with the two regions each seeing 28 percent growth (and very strong gains in Russia specifically). Travel retail is up 39 percent, with top airports in Beijing, Shanghai and Korea.

Tom Ford Beauty is launching in two markets a year: China and Korea opened in 2015, and New Zealand and Taiwan will open this year. Jesel said Asia overall is seeing 85 percent growth.

This year, the brand stepped up its distribution to Sephora. The retailer started with the Signature scents in 2007, and in March added the Soleil franchise of color cosmetics and Soleil Blanc Private Blend in 25 doors as well as Sephora’s e-commerce sites in the U.S. and Canada. The goal is to increase this to 50 doors.

“This showed us that the Tom Ford brand could reach a consumer half the age or 15 years younger [than we thought]. We reached new consumers that weren’t central to the target,” especially with Millennials, which “unlocked a completely new growth engine,” Jesel said.

His hunch is that social media and digital are the main drivers of sales today, coupled with real estate at Sephora.

He added: “Sephora is where they play, and makeup was a great way to enter into the brand. First of all, the price point is a little lower. It’s high for lipstick [$52], but low for a luxury brand, and to enter through a color cosmetic line that’s a 32 sku line isn’t overwhelming. It’s a tight assortment.”

The next logical category for Tom Ford Beauty is skin care, where the brand is slowly getting its footing. Currently, the men’s grooming line is available in 200 doors and the small women’s skin-care range has similar distribution. Jesel said he’s surprised by the success the women’s line is seeing in China, where a $225 face oil is a popular item.

Jesel said the expansion of skin care is a sector “we need to explore next” — but carefully.

“You don’t want to rush into those things. It’s different for a fashion brand to create authority in skin care,” Jesel said, quickly adding that this doesn’t apply to men’s grooming, where items such as a $50 beard oil that comes in three of the top-selling Private Blend scents is a bestseller. “For men’s, it’s different because men want to look like Tom.”