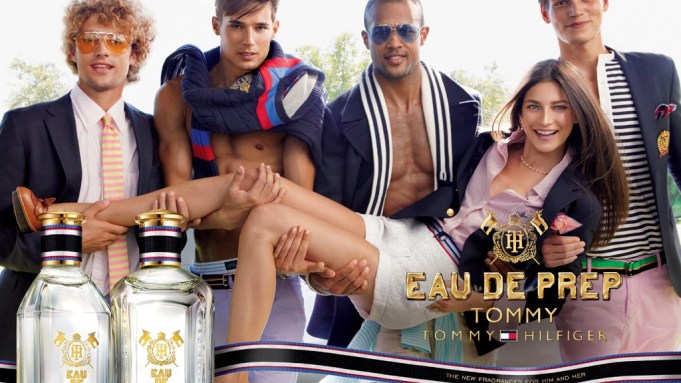 Tommy Hilfiger is playing to his core audience with his newest fragrance masterbrand, Eau de Prep.

The masterbrand, which is exclusive to Macy’s in the U.S., will be launched in October and was created with the designer’s longtime fragrance licensee, the Aramis and Designer Fragrances division of the Estée Lauder Cos. Inc. According to the designer, it was inspired by his spring-summer 2011 Prep World collection, which celebrates all of the iterations of the preppy lifestyle worldwide. The new fragrances are called Eau de Prep Tommy and Eau de Prep Tommy Girl, in reference to his original fragrances.

“Preppy in New York is interpreted differently than preppy in London or Milan or Los Angeles,” said the designer, who showcased the collection in pop-up shops around the globe from April through August of this year. “And that same concept can be applied to fragrance. With any project, you want to evolve. Eau de Prep Tommy Girl expresses a different facet of the classic American Tommy Girl, while Eau de Prep Tommy expresses a different facet of the Tommy customer.”

While the traditional Tommy Girl and Tommy customers might be preppy — with the guys wearing, say, pleated khaki trousers and the women oxford shirtdresses — the Eau de Prep mind-set is that there are no rules, said Hilfiger. “The Prep World and Eau de Prep customer mixes preppy with vintage and gives it a wink and a nod. They aren’t trying too hard to be cool and chic — they just express what they feel.”

Age targets for Eau de Prep will likely mirror those of the core fragrance business — 17- to 45-year-old men and women — although Hilfiger said he thinks the two new scents will likely appeal to those consumers who “fall in the gap between young and the middle of that range.”

Trudi Loren, vice president of corporate fragrance development worldwide for the Estée Lauder Cos., worked with Givaudan to concoct both the women’s and men’s scents. The women’s juice has top notes of Bosc pear, pink pepper and green apple; a heart of white rose, violet leaf and hawthorn, and a drydown of sandalwood, patchouli and musk. The men’s juice has top notes of ruby red grapefruit and clary sage, a heart of geranium, tonic accord, lavender and juniper, and a drydown of amber, oakmoss and suede.

Ottavia Piergiovanni, executive director of global marketing for the Aramis and Designer Fragrances division of the Estée Lauder Cos., noted that the preppy-with-a-twist vibe was carried through to the bottles, which include crests on the caps that are repeated on the outer boxes of the fragrances.

Carol Russo, senior vice president and general manager, North America, for Aramis and Designer Fragrances, noted that the brand plans an extensive media campaign to promote the fragrances. The centerpiece is a major print campaign shot by Craig McDean, featuring models who appear in Hilfiger apparel advertising. It will begin running in November fashion, beauty and lifestyle magazines, including Glamour, InStyle, GQ and Teen Vogue. As well, vials on card, blow-ins and other sampling vehicles are expected to generate “several million” scented impressions, said Russo.

While executives declined comment, industry sources estimated that the Hilfiger scent business generates worldwide retail sales of about $250 million. Sources estimated that the Eau de Prep masterbrand could do about $40 million at retail globally, with about 25 percent of that figure — about $10 million — expected to be generated in the U.S. Advertising and promotional spending could top $7 million, said industry sources.

The masterbrand will roll out in the U.S. and Europe in October, with Latin America and Asia getting the scents in spring 2012.