The arrangement with Estée Lauder Cos. Inc. to launch a signature scent is not restricted to fragrance.

By Julie Naughton and Pete Born on October 27, 2011
View Slideshow 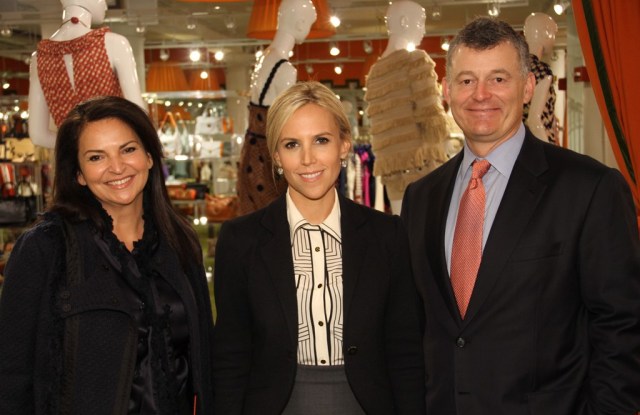 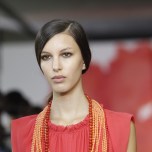 The Estée Lauder Cos. Inc. has taken a big step in its drive to deepen the fashion portfolio of its Aramis and Designer Fragrances Division by signing a licensing deal with fashion star Tory Burch.

This story first appeared in the October 28, 2011 issue of WWD. Subscribe Today.

“We feel fortunate we are in partnership with Tory Burch,” said William Lauder, executive chairman of the Estée Lauder Cos., during an exclusive interview at Burch’s Chelsea showroom. “It is one of the rising iconic fashion brands that fits perfectly in our portfolio of brands.”

The Aramis division has been on the march this year by acquiring beauty licenses with the Ermenegildo Zegna Group in March and Marni in September, two Italian fashion brands, representing the men’s and women’s markets, respectively. This marks Burch’s first foray into the beauty industry and confirms a report in WWD on Sept. 14.

“For me, beauty was part of the plan since the beginning, especially fragrance,” said Tory Burch, chief executive officer of the brand which bears her name, of the multiyear global beauty license. The first product is expected to be a women’s scent in 2013. “We saw it as a natural addition to what we’re doing now. It was a four-year conversation with Estée Lauder — it was all about the right timing for us and for Lauder. We wanted to establish ourselves for who we are and learn who we were, and it’s taken us seven-and-a-half years to really understand, from where our potential is, as well, and growth around the world. What attracted us to the Estée Lauder Cos. is that we felt their vision and our vision were completely aligned in the way we look at business and the long term.”

In addition to an e-commerce site and specialty store distribution, Burch currently operates 60 freestanding stores globally, the most recent of which is a store in Dubai. Beirut, Turkey, Singapore, Hong Kong and Beijing are also in the immediate plans; Burch said she expects to open 18 additional stores in 2012. “What’s great about fragrance is that it will allow us to have a broader reach. We have great brand recognition [even] where we don’t have a presence, and I think fragrance will allow us to establish our presence [in these markets.]” Burch said that the U.S. and Asia are two of her largest markets, and that despite what’s going on in Europe, the brand is performing well there.

“We’ve also found, in working with a lot of designers, that our efforts can help the brand figure out where the next right markets are — because it’s fairly easy to take the brand proposition in beauty and see where the consumer says, ‘I like what this brand proposition is.’ It says to the brand, ‘OK, time to go in,’” said Lauder.

But the Lauder arrangement is not restricted to fragrance, unlike many designer deals. Lauder described the dimensions of the deal as a complete house of beauty and said the company plans to do a color cosmetics capsule collection, which will be distributed in Burch’s stores. “We start with the fragrance and then do a capsule beauty collection that’s in line with [the designer’s] vision and limited in scope,” he said. “We go in tight and neat, and get a read of what really works and what the takeaway is before jumping into the water with both feet. We’ve done that successfully with one or two other brands; Tom Ford is the best example. We went in with the lipstick collection, which was very successful — and we were able to say there’s a real receptivity to the total beauty collection. We’ll try to do something similar with Tory.”

Lauder executives said the Burch brand would fill gaps within its existing portfolio. Specifically, Burch adds consumer engagement, retail integration with its stores and a stronger presence in specialty stores. “Tory has managed to create a very strong connection with her consumers — not only through her retail environment, but also through the digital platform,” said Veronique Gabai-Pinsky, global brand president of Aramis and Designer Fragrances. “She is one of the most followed brands in that space. So this idea of a capsule collection, specifically for her retail operation, would be a wonderful way to express the brand in its full glory, to really establish the equity and to continue this great work of engaging with Tory’s consumers. We want to give a very rich experience to the consumer.”

Lauder added: “The trend we’re seeing is that the more aspirational brands are affordable luxury. Yes, there are some brands in our portfolio that are very high-end, but the brands that have the longest leg potential on a global basis are those brands that have that very aspirational vision, that luxurious touch, but they’re reachable enough. Also, what attracts me to the brand is that there are women who live in Tory every day. It’s not a special-occasion brand, it’s every day. If it’s not the shoe or the handbag, it’s the clothing. And that’s what’s important, to be surrounded by the brand every day and aspire to be a part of it. Beauty has always been that entry point to the brand, and this brand has that aspiration.”

Burch, who was wearing Vetiver — also worn by her father and brothers — during the interview, said she hopes to offer the customer something “that’s of great value at an accessible price. That’s what’s going to make us stand apart — giving them something of high quality that’s not a fortune. That’s aligned with the concept of our [fashion] brand.”

Gabai-Pinsky agreed. “The fragrance industry has been undermined with a lot of clutter, and the consumer is asking for something different, with a story and authenticity behind it. This is the ambition we have with Tory — to really bring to the market something that will resonate, delight and inspire, and that will touch the consumer in many different ways.”

Another piece of the partnership will involve the Tory Burch Foundation, a nonprofit 501(C)3 organization that provides economic opportunity to women and their families in the U.S. Burch launched the foundation in 2009. Under her direction, the Tory Burch Foundation helps women access financial tools which improve their lives, focusing on what she calls “micro-entrepreneurs” — self-employed women with small businesses.

Are more Burch licenses on the horizon? “I think we’re always interested in new businesses,” said Burch. “From the beginning, we offered almost 12 categories — we went into the categories and started working on each one, whether is was footwear, handbags, whatever. Now, we’re working on costume jewelry [in stores now] and swim [launching in spring 2012]. Home is interesting to me, as is sport.” What’s not on the horizon? A full men’s wear line. “We’d eventually like to do some, in more of a gift way,” said Burch. “But not a full collection. Maybe some swim trunks or ties or pocket squares.”