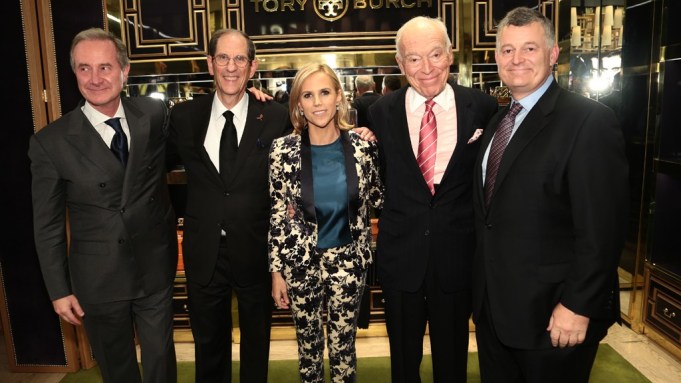 While executives at the retailer as well as Burch’s fragrance licensee, the Aramis & Designer Fragrances division of the Estée Lauder Cos. Inc. declined to comment, estimates were the Burch fragrance — the designer’s first — was a strong performer throughout the Bloomingdale’s chain on the day of its launch, which was last Thursday.

That evening, Burch made a personal appearance for her fragrance at Bloomingdale’s 59th Street flagship here, which drew about 500 people. Those buying the fragrance were able to have their bottle signed by the designer.

“I have two loves in my life — Bloomingdale’s and Tory Burch,” said Leonard Lauder, chairman emeritus of the Estée Lauder Cos. Inc. “Not only is Tory beautiful, she is talented and knows what women want.”

The scent is exclusive in the U.S. to Bloomingdale’s and Tory Burch boutiques through the holidays.

Michael Gould, chairman and chief executive officer of Bloomingdale’s, called the event “the largest turnout for a fragrance personal appearance in my 22 years here.”

“Tory is one of the most important designers and brands in the store,” Gould added. “This is a major milestone for us.” Bloomingdale’s turned all of its store windows into a veritable Tory-land, featuring the scent everywhere. “I’m trying not to get emotional,” said the designer with a large smile.