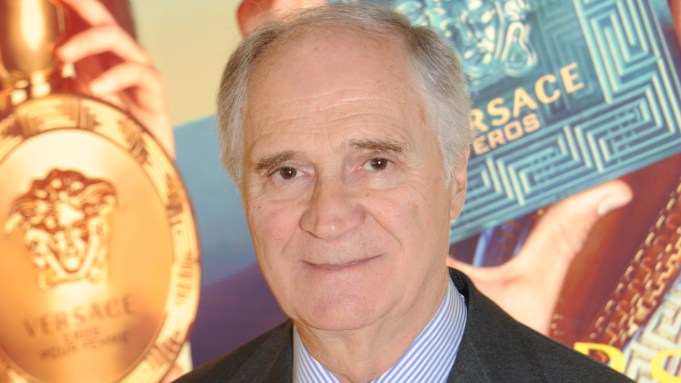 CANNES, France — No one would have known that a travel-retail show was going on in Cannes without banners fluttering along the oceanfront main drag touting the fragrances that were being hawked in the cramped stands inside the Palais des Festivals. The film festival was done and gone. The new stars were bottles.

Easily the most whimsical — if not eye-opening — offering came from Euroitalia.

Jeremy Scott, creative director of the Moschino fashion brand, has come up with a fragrance that is as unexpected and ironic as his last offering, which was a fragrance called Toy packaged inside a teddy bear.

This time around he dreamed up a scent called Fresh that has suitable juice inside the container, a woody floral created by Alberto Morillas of Firmenich.

The packaging fits the concept with a twist. It is a replica of a common household cleaner. But in the best high-low spirit of fashion, the bottle is made of glass, instead of plastic. The outer carton was designed with the quality usually reserved for perfume extracts. And the irony doesn’t stop there. The ad, shot by Steven Meisel, shows Linda Evangelista vamping as a housewife.

Giovanni Sgariboldi, president of Euroitalia, admitted that he had entered new territory. When asked to estimate how well the fragrance might do, he replied: “From the first days here in the fair, I would have to tell you we will do a fantastic job. But we have to discover this business.”

What is more straightforward is Euroitalia’s first perfume for Missoni, which represents the founding of a brand as well as the debut of a fragrance. That project is almost the opposite of Moschino Fresh in temperament. The self-titled Missoni was designed to evoke memories of the venerable fashion house and its penchant for colorful design. The bottle is made of prismatic glass that refracts rich color and the outer carton is decorated with a swath of material to resemble fabric.

The price of a 100-ml. bottle is 98 euros, or $105 at current exchange. It will be launched in Italy at the end of this month, along with a debut at Harrods in London.

Ferragamo Parfums took the opportunity to unveil the third women’s scent in its Signorina collection, following Eleganza from 2014. The new chapter is called Signorina Misteriosa, and it is due to launch in February. As the name implies, the positioning is meant to evoke a sense of mystery and be more emblematic.

In addition, Luciano Bertinelli, president and chief executive officer of Ferragamo Parfums, hinted that a new men’s scent is on the verge of being released. He described it as a new pillar for the brand.

“It is quite fresh,” he said. “We are going to have a new target, a masculine person really, a new man [who is] going to be stronger with more character.”

Bertinelli said the secret scent will appear on counter next September.

In addition, Ferragamo will launch the seventh iteration of its Tuscan Soul collection of niche fragrances, which was launched late in 2013.

The executive mentioned that the company has not lost faith in Russia, despite its severe economic difficulties.

“We have to wait another six months to see some results in Russia,” he remarked. “We will never give up in Russia. We continue to invest. We are having now a huge promotion with outdoor [billboard advertising] in Moscow. He added that the company is discussing whether to advertise Signorina Mysterioso on Russian TV in February.

Valeria Manini, managing director of Bulgari’s perfume unit, was at the fair giving distributors and other partners a taste of what is to come. Next September, the jewelry design and luxury house will a new male scent, Le Gemme for Men. This comes on the heels of the launch of Goldea, an eau de parfum that is designed to take the house into new territory.

Goldea was rolled out in Europe earlier this month with industry sources projecting a first year’s global sales target of $30 million. The fragrance is scheduled to debut in the U.S. in mid-January. Bulgari is also rolling out the latest in its Omnia series of eaux de toilette, which have young following. This one is called Omnia Paraiba, and it was introduced in the U.S. through Sephora.

Manini pointed out that Bulgari’s most successful launch was not a women’s scent, but a men’s — Man In Black, the 2014 entry. Now the company is coming out with a lighter cologne iteration that Manini hopes will be a hit in Asia, which is Bulgari’s heartland.

She explained that 20 years ago Bulgari headed East, when other companies were concentrating their efforts on Europe or the U.S. The result is that the two pillars of the Bulgari fragrance business is travel retail and Asia. According to industry sources, one-third of Bulgari’s total fragrance sales are generated in Asia.

Next on her wish list is to build up Bulgari’s presence in the U.S. Man In Black will roll out in Dillard’s between April and June.

One company that has always focused on travel retail is Beauté Prestige International (BPI), the fragrance division of Shiseido. One of its key projects for the next year is to launch its first Zadig & Voltaire fragrance in the fall in an effort to reach a younger customer and also help take up the slack created by the loss of the highly lucrative Jean Paul Gaultier license.

“It’s a very disruptive approach in terms of fashion,” said Louis Desazars, president and chief executive officer of the Shiseido Europe Region and of BPI, referring to Zadig & Voltaire. “It targets a much younger customer as a fashion, lifestyle brand. It’s very different from anything we have for today in our portfolio.”

Eric Henry, chief operating officer of BPI, added: “It’s a much broader audience — in 20s and 30s — as compared to other designer fragrances that are more high-end and appeal to mature ladies.” He explained, “they are high consumers of perfumes.”

In a pitch to reach a younger clientele, Groupe Clarins is gearing up for the launch of a new Thierry Mugler women’s fragrance in the blockbuster Angel family and for a new men’s scent from Azzaro.

The Angel-related perfume — fronted by Georgia May Jagger, the daughter of Jerry Hall, who was the muse of the original Angel perfume from 1992 — will target Millennials. Its juice is billed to be the first feminine vetiver gourmand on the market.

The fragrance’s bottle, described as appearing like a “cosmic pebble,” lies on its side in the same way that the original Angel does but has a more organic shape, in keeping with the fashion design of David Koma, Mugler’s artistic director.

For its part, the Azzaro fragrance brand is marking its relaunch as a bolder, more flamboyant and provocative label with an upcoming scent, called Azzaro Wanted. Its fragrance bottle resembles a barrel of a gun, and the TV advertising features a free-living guy.

Firmenich’s Fabrice Pellegrin created the juice, which starts out fresh then dries down with more woody and spicy notes.

Lalique was expanding its Noir Premier range with Or Intemporel, meant to be an olfactive interpretation of gold, with tobacco and coffee notes. Lalique also added to the Encre Noire line, which was launched 10 years ago and has become one of Art & Fragrance’s bestsellers, with a richer, intense version called À L’Extrême. The label’s beauty sales have multiplied almost fourfold over the past four years.

“Lalique has turned into a lifestyle brand over the last five years,” said Silvio Denz, chairman of Art & Fragrance, during a speech.

The company has been investing in its production plants to increase capacity and efficiency.

During another cocktail party, INCC Group’s president and chief executive officer Rémy Deslandes unveiled the new Monaco Parfums brand — the first official fragrance license from the Principality of Monaco. The label launches with a masterbrand, with the women’s perfume, a floral chypre citrus scent, by Givaudan’s Calice Becker.

The men’s iteration, a woody aromatic leathery scent, was created by Givaudan’s Antoine Maisondieu. Both fragrance bottles sport the seal of Monaco.

During the past two years more than 1 million bottles of Mercedes-Benz fragrance have been sold in 100 countries through 10,000 doors, according to INCC.