There's a reason Tova Borgnine is often called the first lady of beauty at QVC and why she's moved more than 10 million bottles of her fragrance... 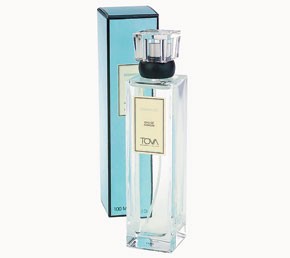 NEW YORK — There’s a reason Tova Borgnine is often called the first lady of beauty at QVC and why she’s moved more than 10 million bottles of her fragrance worldwide without most customers even smelling it.

“Tova? Darling, I love Tova’s Signature,” screamed a reporter’s friend upon learning of an interview with Borgnine, who is in the midst of celebrating the 25th year of Signature. “I’ve never had anyone ask me what perfume I was wearing until I used Signature….It was just like the stories she tells on QVC,”  the exuberant friend related.

Borgnine’s talent for describing her scents over the tube helped build Signature into one of the best-selling fragrances on QVC. This year marks her 17th year on the network and it is being celebrated with yearlong promotions, including one that sold more than 31,000 units in one day from three one-hour appearances, according to QVC.

“Tova has been an amazing experience,” said Allen Burke, QVC’s director of beauty merchandising. “She is one of the great ladies of the industry and has built an amazing business. When I meet people and tell them what I do they ask me, ‘Do you know Tova?’” he said. Burke believes it is her passion for her products that transcends the airwaves and has amassed such a cult following that there are customers on auto-replenishment to receive Signature every 60 or 90 days so they never run out. After all, before Philosophy and prior to Leslie Blodgett at Bare Escentuals, Borgnine proved the power of direct selling.

Borgnine never wavered in her belief she could sell her juice over the airwaves. “You have to think before QVC there was mail order and I saw that evolve into a form of distribution,” she recalled. Signature was born from bath oil that she had found in San Francisco and then traced to Steve Manheimer. She went to New York, found his firm and said she wanted to develop it into a fragrance. The mixture of jasmine, lavender, citrus and bergamot with sandalwood was a stark contrast to the potent scents of the day such as Poison, but she quickly found an audience for those who liked the clean formula. In an interesting twist, the notes of Signature are in vogue again today. At that time, Borgnine was becoming known for skin care products, which remain in her lineup today.

She was approached first by CVN to sell her skin care, but thought that network was too focused on jewelry. When QVC bought CVN, Borgnine contacted the firm and managed to snare a 15-minute meeting with then buyer Darlene Daggett that led to her debut for skin items just before Christmas in 1990. Daggett went on to become president of the network. Borgnine was such a success that consumers asked for fragrances to be added. She tested scents on-air in 1991 and peddled $134,000 worth during her first show. Although TV shoppers couldn’t smell the scent, they had the security of being able to return it at no risk for 30 days.

Other Borgnine milestones include a QVC record for Today’s Special Value by selling 66,000 pieces of a set in 20 minutes, adding the United Kingdom and Germany to her reach and recently nomination to the FiFi Hall of Fame.

“Do we deserve it,” she asked rhetorically of the FiFi nomination. “Yes,” said Borgnine quickly. “But not just for me but for Manheimer, QVC and all involved.” Borgnine’s scents have been nominated for FiFi’s in the past, but this is the first to the coveted Hall of Fame.

What makes Borgnine’s success even more impressive is the staying power of the Signature scent and extensions at a time when entry fees are high and success rates low. While not discrediting the celebrity phenomenon, Borgnine said the products lose credibility and ultimately collapse.

The formula has stayed the same, she said of her fragrance, with less than a 20 percent jump in price over the past 17 years.

In June, Borgnine will introduce a new Signature — this time Signature Summer. It adds to other offerings such as Tova Nights (the naughty Tova, she quipped), Mind & Spirit, Tova for Men, Body and Tova Love Everlasting. “We’re very excited about Summer,” said Burke. “Every time we launch a new scent, we feel we get new users to Tova.” Borgnine describes Summer as a California grapefruit with a twist.

“She’s a pioneer…nobody would have thought upscale fragrance could sell on TV and I’m sure loads of people told her she was not thinking clearly. But she turned out to be the smart one and she connects with a loyal following,” Burke concluded.

As reported last year, Walgreens ended its exclusive retail relationship with IsaDora cosmetics. Now, the Swedish-born brand has a new pipeline in America via CosmeticMall.com. IsaDora performed well at Walgreens, but industry sources said the retailer decided to eliminate it from 2008 planograms as it was time-consuming to manage. As its U.S. retail partner, Walgreens helped the company devise mineral makeup products for IsaDora, which weren’t yet available in Europe.

“We are very excited about our new relationship with CosmeticMall.com, and that they will be adding IsaDora to their lineup of premium brands,” said IsaDora’s creative director Ingrid-Marie Johansson. “CosmeticMall.com is the ideal partner for us because it is extremely committed to educating its consumers and to offering them the best possible products to meet their individual needs.”

Established in 1996, CosmeticMall.com became the first multibrand beauty and personal care retailer on the Internet and offers over 50,000 top makeup, fragrance, skin care and hair products, as well as tools and gifts for women, men, teens and babies.