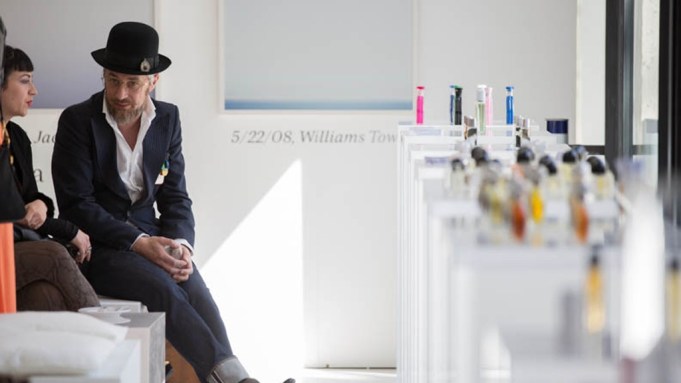 MILAN — Though most luxury perfume brands jumped ship from Cosmoprof Bologna years ago, this year, even Esxence — the five-year-old niche fragrance salon — proved too conventional for some. Celso Fadelli, chief executive officer of Intertrade Europe and one of the founders of Esxence, left that fair and instead opened the first edition of Unscent, a gallery of multisensorial fragrance displays and artwork also open from March 21 to 24.

“Today you can buy most things online — so what is the client looking for when he enters a store?” Fadelli said. “We have to give our clients an experience, and simply creating a standard fair exhibit is limiting.” Fadelli added that he was uncomfortable with the growth of Esxence, which he believes is counter to the very concept of niche perfume. This year, 5,815 visitors attended Esxence, up about 4.5 percent over 2012, while just more than 500 turned out for Unscent.

But Maurizio Cavezzali, ceo of Equipe International, which organizes Esxence, said it has a highly “restrictive” committee evaluating brands on quality and commercial value. “It’s absolutely in our interest to develop — the fact that Esxence is growing significantly is only a positive,” he added. “If we don’t grow at all, we lose relevance.” For the past several years, the fair has been held at La Permanente museum in Milan, but if the number of exhibitors and attendees rises, Cavezzali said it would move to a new location.

Noting Esxence remained an important meeting place for perfumers, designers and retailers, Cavezzali highlighted its emphasis on educating the next generation of industry professionals through workshops. This year, the fair saw a mix of veterans and newcomers.

Antonio Visconti, a perfumer who has attended the salon with his namesake line for four years, was also presenting two newer labels, Royal Crown and Queen Crimson.

His daughter, Nicoletta Martino, the company’s export and p.r. director, explained that her great-great-great-grandfather, Averardo Visconti, was a Florentine glove-maker living in Paris, and her father had revamped some of the scents his forebear used on the leather. With a price range between 170 and 220 euros, or about $218 to $282 at current exchange, the 13 Antonio Visconti eaux de parfum are available all over Italy and in Germany, Switzerland, London and the Middle East. While raw materials come from Grasse, France, Martino said the rest of the fragrance production takes place in Italy.

Sebastian Maria Fischenich, cofounder and creative director of German brand Humiecki & Graef, had also been at the fair several years running. “To support image, Esxence is very important for us,” he said. “It’s really developed well over the last years.”

Newcomer Davide Di Costola, export manager at Eurovetrocap, a company that produces plastic and glass bottles and cosmetics packaging, said he was drawn to the fair for its international component. Limiting its size, he suggested, was illogical. “The whole point of fairs is to broaden your network,” Di Costola said.

Also at Esxence for the first time was Aurélie Pineau, business developer for Mad et Len, an artisanal brand that makes fragrances and candles, as well as tea, jewelry, home decor items, stationery, leather totes and shoes. Based at an atelier in Saint-Julien-du-Verdon, in the southeastern corner of France, Mad et Len gets its name from Marcel Proust’s famous description of retrospection while dunking a madeleine cake in tea. The label is available at select high-end locations internationally, such as Antonioni and Excelsior in Milan, Tsum in Moscow, Wuhao Curated-Shop in Beijing, I.T Ltd. in Hong Kong, United Arrows in Tokyo and L’Eclaireur, which has an exclusive for Paris. Prices run from about 42 to 300 euros, or $54 to $385 at current exchange, for body fragrances, to about 55 to 300 euros, or $71 to $385, for interior fragrances.

At Unscent, held at the 18th-century Palazzo Morando in the heart of Milan’s high-fashion district, visitors could stop by a room set up to resemble Andrea Maack’s studio, and chat with the Icelandic artist as she worked. “I think this is much nicer [than Esxence],” she said of the set-up. “This is more what I’m used to doing.” Maack, who paints and sculpts in addition to working on her fragrance line, hinted that this fall she would be introducing a new textile project.

Niclas Lydeen, one of the founders of Swedish brand Agonist, was presenting its new scent, Isis, in a darkened room where the hand-blown yellow glass perfume bottle rested on a wooden case, surrounded by smaller bottles in disarray. Visitors were offered headsets with recorded sounds of glass cracking. “We wanted to create tension, and connect sound with fragrance,” Lydeen said.

Giovanni Castelli, managing partner for the brands Acqua di Stresa and Blood Concept, said Unscent allowed brands to fully express their identities: Illustrator Andrea Tarella was hand-painting bags at the Acqua di Stresa counter, while in Blood Concept’s dark room, visitors could smell the label’s new fragrances in small glass bowls as they watched videos and listened to music matched with each. Fashion blogger and critic Diane Pernet had also created a Video Olfactory Room, with a film based on the emotions stirred by fragrance.