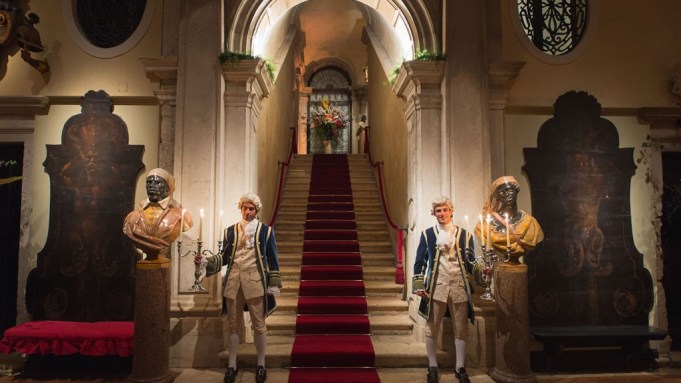 VENICE — As the sun beat hotly over this city’s winding streets and salty canals, Valentino and Puig celebrated the launch of Valentino Uomo, a new men’s fragrance that aims to channel the direction of the Italian fashion house’s men’s collections and become a pillar in the industry.

“We wanted to accompany the expansion of the men’s line, to create a classic of tomorrow,” said José Manuel Albesa, chief brand officer at Puig, adding the eau de toilette would appeal to men who “have a classic side, but are very cool at the same time. It’s a customer who likes good quality products and is very exacting.”

The fragrance’s face, French actor Louis Garrel, was selected to embody a “kind of modern-day [Marcello] Mastroianni,” in the commercial shot by Johan Renck and images by David Sims, Albesa said.

Creative directors Maria Grazia Chiuri and Pierpaolo Piccioli said the new fragrance was closely linked to Valentino fashion, and the choice of Rome as location for the campaign cemented the connection. “We have the good fortune to live in a city where sometimes we take beauty for granted,” Chiuri said. “All these layers of history, blended with the present — and there’s also this relaxed way of living.”

The commercial shows a gallant Garrel breezing through the ancient city under canopied trees, strolling into aristocratic palazzos and charming beauties such as Caroline Brasch and Maud Welzen, both of whom frequently appear in Valentino campaigns.

Piccioli said the studs on the perfume bottle’s otherwise classic shape reflected the designers’ inclination to mix contrasting design elements: The result is evocative of a flask of fine liqueur.

Perfumer Olivier Polge, who is winding up his duties at International Flavors & Fragrances before joining Chanel, said the fragrance eschewed the traditional “top-heart-drydown” pyramid structure in favor of a less rigidly constructed blend that put greater emphasis on the rich, woody base notes. Ingredients include spicy bergamot, myrtle, roasted coffee, gianduja cream, white leather and cedar. “The trick was to find the right balance,” Polge said.

Distribution will kick off in Europe, Russia and the Middle East in early 2014, before reaching Asia in spring and Latin and North America by the end of the year or the start of 2015, hitting a total of about 16,000 doors, according to Albesa. He would not discuss sales projections, but industry sources said Valentino Uomo could reel in 75 to 80 million euros, or about $98 million to $105 million at current exchange, in its first year on the shelf.

With the 70th edition of the Venice Film Festival still under way, festivities stretched into the evening, when Chiuri and Piccioli hosted the exclusive Ballo Volpi, a reprisal of the ball created in 1932 and named for festival founder Count Giuseppe Volpi di Misurata. Held at the Count’s former residence on the Canal Grande against a backdrop of wall-to-wall frescoes and ornate ceilings, the party featured a performance by British band the Klaxons, with vocalist James Righton’s wife Keira Knightley cheering on the sidelines.

Garrel, as the fragrance’s face, was also in attendance. “At first, I didn’t know what to think [when asked to be Valentino’s fragrance testimonial],” he said. “But the clothes they make, I find them very elegant, and then they introduced me to the director in charge of the commercial and we got along right away, and I thought, ‘Cool, a new experience.’”

His girlfriend, sultry Iranian actress Golshifteh Farahani, said her Venice schedule left little time for tourism. “I’ve been here for a week, and I’ll be here four or five more days,” she said. “I’ve been here many, many times. This time it’s a bit too much movies — I’m a judge, so I have to watch a lot. But it’s beautiful.”

“We’re here on vacation, not with the festival,” confessed Diane Kruger, noting she and partner Joshua Jackson had been actively “hanging out at the pool drinking Bellinis.” Jackson added that upon his return to the U.S., he would roll up his sleeves for a pilot project titled “The Affair.”

But while some guests waxed poetic about Venice, others were more concerned with the impending arrival of fashion week.

“I’m going to stick to New York and do Michael Kors on the 11th and then go to Ibiza for my husband’s birthday party, and then Milan,” said model Karmen Pedaru, referring to Riccardo Ruini.

“Tonight’s my last night here,” said designer Marta Ferri. “Then I absolutely have to work, or I’ll have an anxiety attack!”