The fragrance will be introduced in September by the designer's fragrance licensee, Elizabeth Arden Inc. 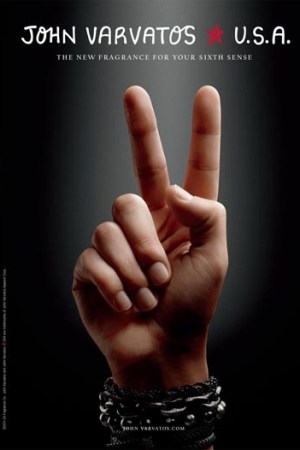 There’s a new light in John Varvatos’ firmament: the first scent to be launched for his Star USA apparel line.

The scent will be introduced in September by Varvatos’ fragrance licensee, Elizabeth Arden Inc.

While Varvatos’ existing fragrances continue to be sold, the designer said he wanted to go “on a different route” this time around. “Our Collection fragrances are all doing fantastic, but we don’t need any more of that ilk right now. We’ve got a handwriting there. Now, we want to take a risk and push the walls out and do something different.”

The designer noted that his Collection label aims for a look of perfection and targets a sophisticated, classic man. The Star USA consumer, on the other hand, is about “being a little off. [For instance], we put wires in the lapels and jackets because he wants to look a little rumpled.”

Varvatos noted that age targets no longer matter, especially in men’s wear. “In women’s [wear] if you wear a dress too short, you look kind of stupid at a certain age. In men’s, it’s really more about how you put your style together. The proportions don’t really change much in men’s.”

The juice was concocted by Givaudan senior perfumer Rodrigo Flores-Roux. “The unusual thing about Rod and his working with me since about 2002 is that he kind of lives in the brand,” said Varvatos. “He really understands that we’re not just creating another scent, but that it needs to fit in with the whole lifestyle and connect to the same consumer.”

Varvatos recalled that when he was developing his first scent, Flores-Roux “was the one guy who really wanted to get deep into the brand versus ‘Can we have the brief?’ I was asking, ‘Well, do you know enough about the brand? About the guy? Do you know what his life’s about?’ He was the one that really dug in.

“I want to create something that isn’t just for the moment and that has lasting appeal,” Varvatos said, pointing to Chanel No.5 and Issey Miyake as scents he’d like to emulate — “not in terms of olfactive properties, but in terms of continued growth in the marketplace.”

Flores-Roux said he wanted to give the Star USA consumer “something to think about” with the fresh woody Star USA juice, which has top notes of Laotian red ginger essence, juniper berries and Sicilian cedrat; a heart of blue spruce, green cardamom absolute and osmanthus absolute, and a drydown of vetiver, belambre, and Venezuelan tonka bean. Eaux de toilette in two sizes — 1.7 oz. for $55 and 3.4 oz. for $70 — will be sold, as will a 2.6-oz. deodorant stick for $20. The Laotian red ginger essence is proprietary to Givaudan and this is the first time it has been used in a fragrance, said Flores-Roux.

The packaging “is like an old bottle,” said Varvatos, pointing out the spring-loaded cap inspired by antique beer bottles and a topper inspired by an old subway token. “We wanted it to feel tough and masculine,” he said. What there won’t be is an enormous logo. “Our guy doesn’t need that,” the designer said. “He loves the juice and the industrialness of this thing.”

The scent will be available in about 3,000 department and specialty store doors in the U.S., said Tamara Steele, senior vice president of global fragrance marketing at Elizabeth Arden. The media campaign, which will include scented national advertising, is still being finalized, said Steele, who added that print ads are likely to begin in October books. Sampling is planned for summer and fall music festivals such as Lollapalooza, said Varvatos. Outdoor advertising is also planned, as is an extensive digital and online campaign, said Steele.

“If you’re not using [online and social media] these days, you’re missing a lot of people,” said Varvatos. He also noted that the Internet’s pervasiveness is both a blessing and a curse: “It’s not as big an issue [in beauty], but in fashion, if you have something on the runway, two minutes later everyone else has it, including those fast-fashion people. And in the U.S., there’s no protection for anybody. In Europe they’ll protect you, but in the U.S. they won’t unless you’ve registered every single item.”

The print campaign, created by Yard’s Stephen Niedzwiecki and shot by Anthony Cotsisas, features a hand with six fingers — two in a peace sign — and the tag line is “a new fragrance for your sixth sense.”

“It’s powerful in what it stands for,” said Varvatos. “The fragrance world is usually about a guy or a girl and all this imagery of the sexiness or the bare skin or whatever. We know that’s what it’s about — we don’t need to do another one.” The “sixth sense” was chosen to harmonize with the apparel brand’s advertising, said Varvatos, and the peace symbol with the fingers is used constantly for the brand, he said. “We want to be quirky and entertaining,” he said.

“We are [pleased] about the launch of the first fragrance for the John Varvatos Star USA brand,” said Elizabeth Park, executive vice president, North America marketing, Elizabeth Arden. While Park and other executives declined to comment on projected sales, industry sources estimated the scent would do $15 million to $20 million at retail in the U.S. in its first year on counter.