Leighton Meester is the face of the designer's new fragrance, which bows first in the U.K. at Harrods in June. 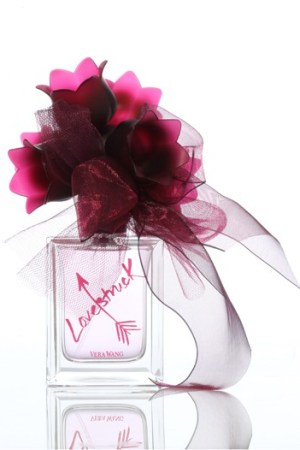 You’d expect Vera Wang and Leighton Meester, the face of her new Lovestruck fragrance, to be discussing the scent after presenting it to a passel of beauty editors at Wang’s spacious Park Avenue apartment. Especially since the new fragrance is the designer’s first major scent in five years and is expected to establish a new direction for her franchise.

Instead, postevent, the new BFFs are animatedly engaged in a discussion about Murano glass. “These are so cute,” says Meester, closely examining a white glass with colorful accents plucked from a nearby table and inquiring where they can be found.

Wang replies, “You get them in Venice. I’ll send you a dozen. I’ll get them as a housewarming gift for you.”

“I shop wherever I am,” says Wang. “I’m an equal-opportunity shopper. Leave me in a mall for three days, and you’ll never find me again. I’m doing my best to sustain the economy single-handedly.”

The lovefest continues as the two remember their first meeting, at Fashion’s Night Out. Wang had already decided that she wanted Meester as the face of her newest fragrance, but was unsure if the deal had been inked when she spotted the actress across an aisle.

Wang notes dryly: “For once, I kept my mouth shut.”

Casting is especially important for Wang, who said she takes great pride in the fact that her runway models — not to mention her fragrance ads, which have featured Zoë Kravitz and Camilla Belle, among others — “don’t look model-y.”

“For Lovestruck, we wanted an actress,” said Wang. “If you can transport somebody with a runway collection, but you can’t transport them with perfume, there’s a problem.”

It’s Meester’s first scent campaign and also the first major fragrance outing in several years for Wang, who intends Lovestruck to comprise a third pillar of her scent business. The other pillars are Vera Wang Signature, which launched on Valentine’s Day 2002, and Princess, which launched in September 2006 and has spawned several spin-offs.

“I think this is the hardest we’ve ever worked on an overall fragrance concept,” said Wang of the flower-bedecked cap, the nail-polish finish of the script on the bottle, the juice — and, of course, the spokeswoman and the ad campaign, developed with Catherine Walsh, senior vice president of American fragrances at Coty Prestige.

The scent, concocted by Givaudan’s Stephen Nilsen in collaboration with Doreen Bollhofer, has top notes of pink guava and angelica flower, a heart of tuberose and lotus blossom and a drydown of precious woods and sheer musk. Eau de parfum in three sizes — 1 oz. for $48, 1.7 oz. for $68 and 3.4 oz. for $78 — will be sold, as will a body lotion, $45 for 5 oz., and a shower gel, $40 for 5 oz. Coty executives declined comment on projected sales, although industry sources estimated that the lineup would do upward of $50 million at retail globally in its first year on counter (the U.S. is expected to account for two-thirds of that figure), with at least $25 million expected to be spent globally (half in the U.S.) on advertising and promotion.

The ad campaign involved Meester posing on a fire escape in a maroon couture Wang gown — on a windy, chilly November day. “Everyone else was in three parkas, and Leighton is standing there in a strapless evening gown,” said Wang. “People were hanging out of windows, up on roofs, taking pictures of Leighton. There’s nothing like the real client on the street to get a market read.”

“I was above it all — literally,” said Meester, referring to her fourth-floor perch on the Mercer Street building’s fire escape.

The print ads will begin running in September fashion, beauty and lifestyle magazines in the U.S., while TV is slated for the holidays, noted Lori Singer, group vice president of global marketing for Coty Prestige Designer Fragrances. Carter Smith shot the ads, with Trey Laird serving as creative director. The scent is out June 5 at Harrods in the U.K. and will be launched in the U.S. in August in about 2,200 department and specialty store doors.

Meester, bitten by the singing bug while she was filming “Country Strong,” has also begun writing music and performing. “[‘Country Strong’] influenced it, but it’s more like singer-songwriter — it started out as just me and an acoustic guitar, and now I have two other guitar players, a bass player and a drummer,” she said of Check in the Dark, the band. “My influences have been artists I love, like Joni Mitchell, Neil Young and Tom Petty. Every day I come to my band and I’m like, ‘I wrote a new song!’ And they’re like, ‘Stop. Stop it. We have enough songs.’”

Meester’s next movie, “Monte Carlo,” is out in July. “I have another movie coming out in September called ‘The Oranges’ (Hugh Laurie co-stars), where my character falls in love with a slightly older man,” she starts.

Wang pipes up, “Oh, you mean like [they do on] the Upper East Side of New York, L.A., San Francisco and London and every other city I know?” eliciting a giggle from Meester before the duo heads off to get ready for the DKMS Gala, which they attended that evening.