MILAN — As luxury consumers develop an increasing appetite for niche scents, which better meet their demands of exclusivity and customization, fashion brands have been adjusting their offer by flanking their perfumery collections with separate, high-end fragrance lines.

To wit, mirroring the custom-made spirit of its haute couture fashion collections, Versace has launched the Atelier Versace fragrance line, positioned at a higher range than its already expansive perfumery offering.

“This is a new milestone for Versace that stems from the idea that every woman and man is different and that, in the same way that they like to get their dress made-to-measure, that’s even more true when it comes to fragrances,” Donatella Versace said of the project.

Manufactured and distributed by EuroItalia, the Atelier Versace line makes its debut in a selection of the brand’s stores today introducing six genderless scents, each celebrating a particular ingredient.

“We all want to find that fragrance that really represents who we are,” the designer said. “I wanted to create something unique and that’s why one fragrance wasn’t enough. So I decided to do a collection of fragrances that felt like they are made-to-measure to one’s taste, exactly like the dresses we create in the Atelier.”

The project has been in the works for two years and marked the first experience in the haute parfumerie not only for Versace but also for EuroItalia.

“This is a completely different project compared to the ones we developed previously in terms of research on materials — which we took to the extreme — and innovation,” said EuroItalia’s president and founder Giovanni Sgariboldi.

According to the executive, the main challenge was to “translate the Atelier Versace values, including craftsmanship, innovation and made-to-measure, into an olfactory world.”

To this end, five different noses were tapped to work on the project, which hinges on three main olfactory families including fruity, floral and woody scents. 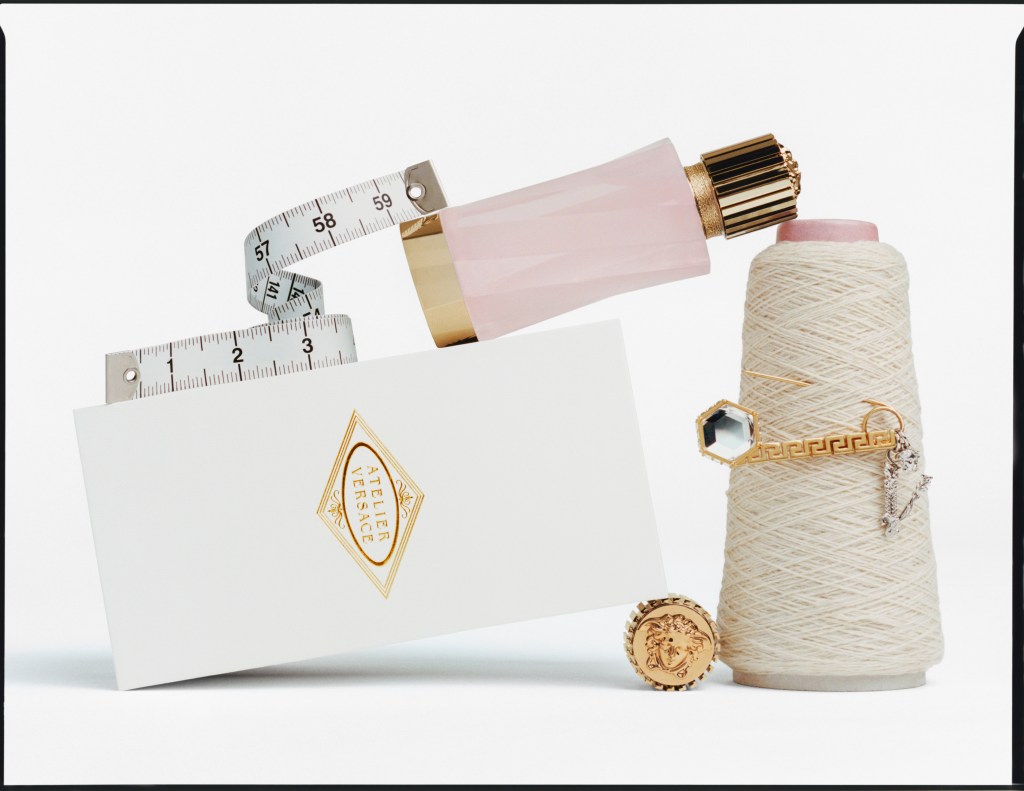 Fragrance-maker Nathalie Lorson was behind both the Éclat de Rose scent, which boasts the Moroccan rose Centifolia complemented by Ambrox — an accord revealing facets of amber, incense, wood, tobacco and musk — and Jasmin au Soleil, combining beeswax with Indian jasmine flowers picked at sunrise to preserve their freshness.

The milky and balsamic scent Santal Boisé by Firmenich’s Christophe Raynaud is crafted from Sri Lankan sandalwood blended with saffron and the cypriol herb, while Jordi Fernandez designed the Middle-Eastern Vanilla Rouge by mixing Madagascar vanilla with powdery musk accords and rose notes.

The six fragrances come in the same glass bottle, offered in a transparent version and in a sleek black alternative to divide the delicate scents from the more intense ones. Evoking the sartorial savoir-faire of the brand, all flacons feature handmade elements inspired by Versace’s fashion collections and signature codes.

Worked with a torchon movement, the bottles reference the pleated constructions of some iconic Atelier Versace creations. Both the glass part and the metallic base feature the twisting motif, which in the former case is enhanced by the combination of shiny and matte finishing. At the bottle top, a golden ring is covered with fine threads to recall a spool while a heavy gold cap lining 24 vertical bars to reference the bustier shapes of in the haute couture range is topped by a three-dimensional Medusa logo.

All scents are offered in a single, 100-ml. format and retail at 345 euros each.

The rollout kicks off in a selection of Versace boutiques in Milan, London, Paris, Barcelona and Munich, where each store is set to dedicate at least a window and a special corner to the project. In addition, the range will also debut today exclusively at Harrods with a custom display, before touching base at Galeries Lafayette in Paris by the end of the year.

In the U.S., the fragrances will be available at Versace’s Fifth Avenue store in New York, as well as in Miami and Los Angeles. In Asia, Versace units in Hong Kong, Macao, Singapore, Taiwan and Tokyo will carry the range, which will be also available on the brand’s e-commerce for the Italian, French, German, English and North American market.

Starting from Nov. 10, the 13-door retail network will be further expanded to other locations, including Rome, Florence, Montecarlo, Frankfurt, Las Vegas, Toronto, Sidney and Bangkok, among others. By the end of 2020, the range will be available in 50 doors globally.

Sgariboldi forecasts sales of the Atelier Versace range in its first year on the market to amount to 10 million euros. Although “the assortment has been conceived to answer to the demands of different markets,” the executive believes the project will resonate the most in the Middle East, followed by Russia and the U.S.

To promote the line in-store and on social media, a dedicated campaign was conceived and shot in the brand’s real atelier housed in its historic Milanese headquarters in Via Gesù. 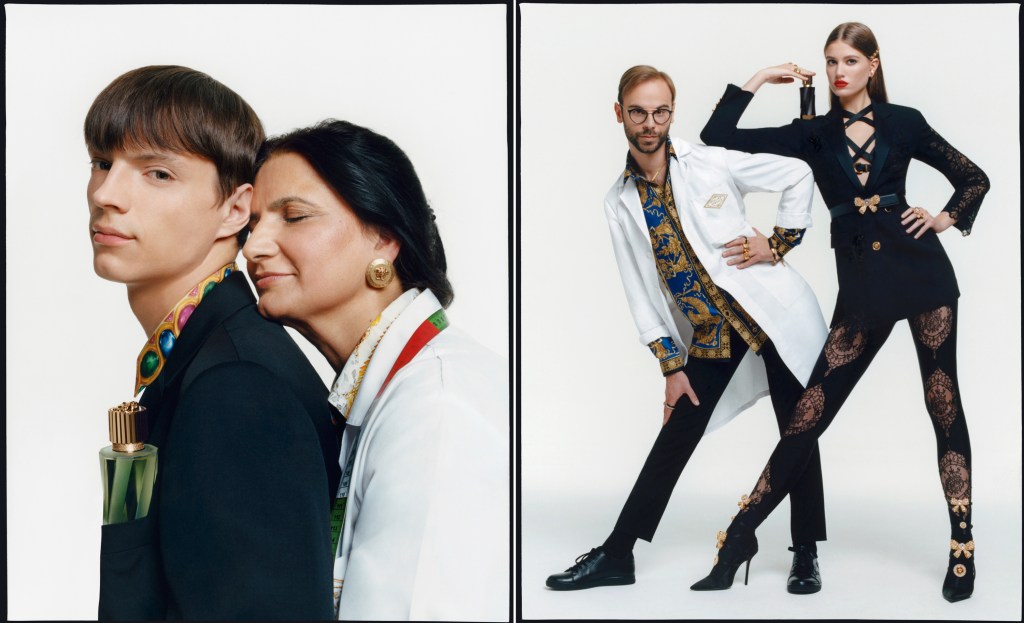 Inspired by the Versace fall 1981 campaign lensed by Richard Avedon, the colored images portray male and female models posing together with the atelier’s tailors and seamstresses while holding the different bottles.

Flanking the imagery, a short video shot in the same location captures the familiar atmosphere behind the scenes of the dressmaking studio. Each tailor reveals a favorite fragrance of the range and interacts with the models during the fitting of couture dresses. Donatella Versace’s name makes a brief appearance on a “thank you” note delivered to the brand’s late designer Luigi Massi, who worked for the company for 33 years contributing to creating many of the showstopping gowns donned by international celebrities on the red carpet, including Jennifer Lopez and Uma Thurman.

EuroItalia is the licensee of Versace fragrances since 2005. The first scent the two companies developed and launched that year was Bright Crystal, which — according to Sgariboldi — is still one of the best-performing perfumes of the brand. Beside the Atelier Versace line, the label counts 15 fragrances on the market.

Other brands that have launched high-end fragrance lines include Giorgio Armani, Dior, Chanel, Givenchy and Salvatore Ferragamo — among many others — through their Armani/Privé, La Collection Privée, Les Exclusifs, L’Atelier and Tuscan Creations series, respectively.