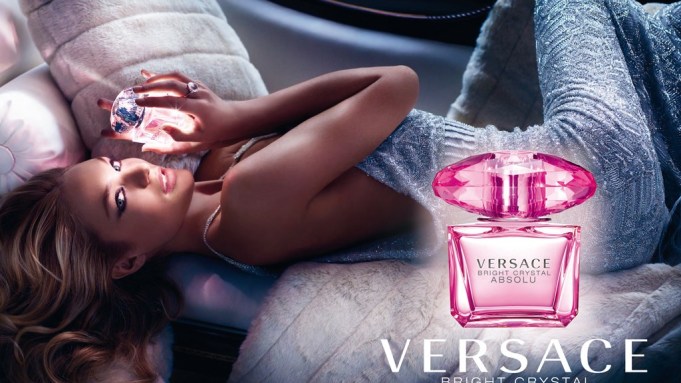 MILAN — Building on the success of Bright Crystal, an eau de toilette that remains a top seller seven years after its launch, Versace and its Euroitalia licensee are introducing Bright Crystal Absolu, an absolute eau de parfum that they hope will reel in fans of its predecessor.

“After the remarkable success of Bright Crystal eau de toilette on a worldwide level, we wanted to respond to the request of highly demanding consumers with a more intense version,” said Euroitalia president Giovanni Sgariboldi. He  added: “We expect that those consumers who are fond of Bright Crystal edt will choose the absolute version for occasions when they desire greater intensity and a longer-lasting scent, so that they can [make a choice] based on the season and, sometimes, their mood.”

Versace creative director Donatella Versace said the power of the brand springs from the formula of the juice. “It’s the scents themselves, which are evocative, vibrant and full of a love of life,” Versace said.

The packaging for Bright Crystal Absolu will retain the fuchsia crystal packaging of the original, with a multifaceted, transparent glass bottle and gem cap presented in an ornate box with designs that deliberately recall the early days of the Versace brand. The edp will be available in two sizes, 50 ml. and 90 ml., and sell for 75.50 euros, and 98.50 euros, respectively. The prices for the U.S. were set at $84 for the 50-ml. size and $110 for the 90-ml. version.

The ad campaign, featuring Candice Swanepoel shot by longtime Versace collaborator Mario Testino, will remain the same, save for the name of the scent. The model is shown sprawled in a sparkly evening dress across a luxurious sofa, clutching the glowing perfume bottle in her hands.

Perfumer Alberto Morillas of Firmenich devised the floral, fruity Bright Crystal edp, which contains top notes of Yuzu and pomegranate in an icy accord, over a heart of raspberry, lotus flower, peony and magnolia and a base of Acajou wood, vegetal amber and musk. Morillas was also the creator of Bright Crystal edt, Versace Yellow Diamond and Versace Pour Homme.

The fragrance will make its debut in Italy this month, before hitting the rest of Europe and the U.S. around Valentine’s Day and the rest of the world throughout 2014, hitting a total of about 15,000 doors.

Industry sources speculated the new edp could generate as much as $100 million in retail sales in its first year on shelf. Without commenting on the figure, Sgariboldi said he was optimistic about sales of Bright Crystal Absolu, considering the edt version had seen double-digit growth in 2012. Key markets outside Europe include the U.S., Russia, China and the Middle East, Sgariboldi added.

“Versace fragrances are bringing in great results on a global scale, with significant sales increases,” he noted. “We are absolutely satisfied with the developments of the past few years and optimistic for the future.”