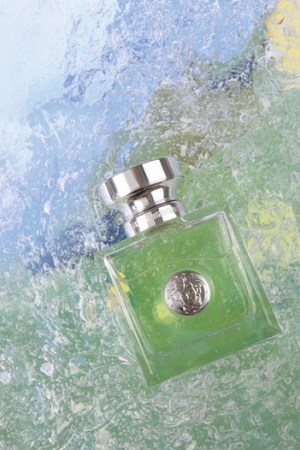 MILAN — It’s no secret Donatella Versace is passionate about fragrances.

The designer admitted that she keeps hundreds of bottles of perfumes and oils in her home.

“I love all types of floral perfumes,” noted the designer for the Milanese fashion house. “I have fun mixing them together and creating new scents. You could say beauty is my passion,” she added.

When Versace started work on new women’s fragrance Versense, she kept her favorite floral scents and aromas from the Mediterranean in mind.

“Versense perfectly represents the Versace woman. I created a fragrance to make her feel incredibly lighter. There’s something very optimistic and confident about being free, and it was that feeling that I tried to capture for Versense,” said Versace.

Versace, who collaborates on the creation of all Versace scents, said Versense’s modern bouquet “clothes the senses” of the wearer.

“It’s a feminine fragrance that defines and explores a strong Versace woman who looks to the future, is always glamorous, decisive and sensual — even with her choice of perfume,” she added.

According to industry sources, Versense could hit up to $50 million in retail sales in its first year. Versace’s fragrance licensee partner Euroitalia said it hoped Versence would reach a top 15 placing in sales results within its first year of sales.

Versense recalls the Milanese fashion house’s original Versace Women perfume with its identical flacon, while its juice is an entirely new creation aimed at a younger, modern customer.

Inspired by the color of emeralds, Versace chose a sparkling green color for Versense’s juice.

Versense’s pale green color is meant to invoke the floral-woody scent created by Alberto Morillas from Firmenich, also the nose behind other Versace scents Bright Crystal and Versace Pour Homme.

Versense combines Mediterranean top notes of bergamot, green mandarins, citrus fruit and prickly pear with a heart of jasmine, cardamom and sea daffodil, and a woody base of sandalwood and cedarwood mixed with olive tree and musk.

The scent’s flacon features signature Versace motifs like the Greek fret around the neck, and the fashion house’s revamped medusa incised on a medallion positioned in the center of the bottle, and on the top of the nozzle. Euroitalia also utilized a new technology in plastic spray stems for Versense, which is invisible to the eye when it is immersed in the juice.

“We really wanted to continue with the luxury feel — that’s why we kept the bottle like the original Versace scent. It has a real luxury feel to it,” said Claudio Tenan, export director for Euroitalia.

Versense’s U.S. launch is set for April 10, with a roll out to 1,500 department and specialty store doors, including Macy’s, Nordstrom, Saks Fifth Avenue and Bloomingdale’s.

A print campaign for Versense depicts German model Toni Garrn in a Versace evening dress on the shore of a beach. Shot by Italian photographer Michelangelo di Battista, the advertisement will be spun out into a 10-second television commercial.