Viktor Horsting and Rolf Snoeren have poured their latest women’s scent into a striking bottled shaped like a bow — a potent symbol of haute couture.

By Jennifer Weil and Miles Socha on January 24, 2014
View Slideshow 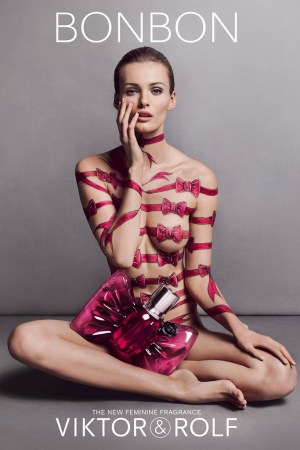 PARIS — Dutch fashion designers Viktor Horsting and Rolf Snoeren have poured their latest women’s fragrance into a striking bottled shaped like a bow — a potent symbol of haute couture.

This story first appeared in the January 24, 2014 issue of WWD. Subscribe Today.

Bonbon, which means “candy,” is for women celebrating pleasure, self-indulgence and letting go, according to Durán.

Its flacon and campaign imagery dovetail from the concept. In single- and double-page ads photographed by Inez van Lamsweerde and Vinoodh Matadin, model Edita Vilkeviciute sits cross-legged with a large version of the bottle in her lap. Rows of pink ribbons are painted on the skin of her otherwise nude body.

Horsting and Snoeren, who founded their house 21 years ago, said the idea for the couture collection — tattoolike decorations on second-skin dresses — sprang from the shoot.

Bonbon’s outer, raspberry-colored box, which appears to be tied up like a gift, bears Viktor & Rolf’s signature seal.

The fragrance will be launched exclusively in March at Viktor & Rolf’s recently opened Paris boutique, de Bijenkorf in the Netherlands and Selfridges in the U.K. The next stage of the rollout is to include Saks Fifth Avenue in the U.S. in April.

In its first year, Bonbon will be in highly selective distribution, not all of Viktor & Rolf’s approximately 7,000 fragrance doors.

“We take the time to build the business; it’s not media-driven,” said Durán, explaining there is almost no television ad presence for the brand but instead an in-store focus.

Flowerbomb was introduced in 2005 and is estimated to be among the top 16 prestige women’s fragrances worldwide, according to Durán. It ranks fifth in the U.S. and number one in the scent’s specific distribution. In the U.K., it is 14th overall and third in the doors it is in.

Viktor & Rolf also launched a women’s fragrance, Eau Mega, in 2009. Then the men’s scent Spicebomb came out in 2012 and ranks second in its distribution in the U.S. and fifth in the U.K.