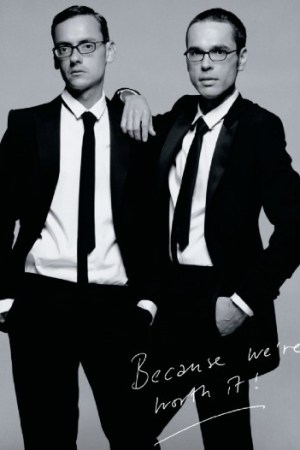 Even before they had launched a ready-to-wear collection, Dutch fashion wizards Viktor Horsting and Rolf Snoeren were dreaming about having their own perfume—to the extent that they actually created a fake one, replete with its own advertising campaign and press release, back in 1997.

This story first appeared in the June 1, 2009 issue of WWD. Subscribe Today.

Never mind that you couldn’t open the bottle, or that the liquid inside was simply colored water. “Do not open/Do not swallow,” the fake release intoned.

“It was essential for us to visualize our ambitions, and to have a perfume was one of them,” Horsting recalls of a time just before the two came to Paris to launch their couture collection. “We just love the mystery of fashion.”

And so, evidently, does L’Oréal, which signed on the duo in 2002, the first addition to its designer fragrance portfolio in 17 years, culminating with the 2004 launch of the hit scent Flowerbomb amidst full-throttle runway l’amour and pyrotechnics.

Horsting recalls how he and Snoeren—first approached by the late Patricia Turck-Paquelier, international brand president of L’Oréal’s Prestige & Collection International division — produced a short movie to present to her and Lindsay Owen-Jones, L’Oréal’s then chief executive officer. It was essentially a compilation of clips from their fantastical runway shows that ended with a deal-clinching close-up of the two men declaring in unison, “Because we’re worth it.”

Giving such an iconic slogan a clever new twist goes to the heart of Viktor & Rolf’s conceptual approach — one that always exemplifies the belief that there is much more to fashion than just clothes and lipstick, much in the way the Grinch realized there is more to Christmas than presents and tinsel.

This is why they are eager to unveil their next women’s scent in July in Paris — details under wraps — and anxious to one day put their name on color cosmetics. “Makeup is definitely high on our list,” Horsting enthuses. “Our brand is about spectacular beauty, and we can express spectacular beauty in different ways….It’s more about a surreal, escapist way of creating beauty than a natural, everyday approach.”

It was spectacular couture creations—including clothes shaped like the mushroom clouds of atomic explosions or paved in thousands of tiny bells — that catapulted two small-town Dutch boys to international fashion stardom.

They launched rtw in 2000 and since have added men’s wear, shoes, silk accessories and eyewear into their brand universe. Last year, Renzo Rosso, the Italian industrialist behind Diesel, bought a majority stake in the Amsterdam-based firm with ambitions to build it into a top international fashion house. A search for a new ceo is under way.

To be sure, L’Oréal executives never perceived Viktor & Rolf as niche, spying big potential in their more-than-meets-the-eye view of fashion and penchant for surprise and storytelling.

“We were always perceiving fashion as a whole universe,” Horsting explains. “They were looking for a brand that could create a universe beyond fashion collections.”

Horsting says he and Snoeren grew up in awe of some of the 20th century’s most iconic fragrances: Yves Saint Laurent’s Opium and Chanel’s No.5 among them. “We’re really interested in such icons and also the fact that really great perfumes say something about their times,” he notes.

Shiseido’s aesthetic, as expressed in advertising imagery, also made a huge impression on the young men in their formative years, given the Japanese brand’s very stylized, “almost surreal image of beauty” in the pre-Photoshop era, Horsting relates.

Yet the two men were clearly bursting with beauty ideas of their own, and once they coined the word “flowerbomb,” along came the idea of smelling a thousand flowers at once, delivered in a powerful burst from a happy, pink, grenadelike bottle.

Horsting lauds that L’Oréal gave him and Snoeren free creative license for their first fragrance, considering the launch came in the wake of the 2001 terrorist attacks on America. In the end, the bomb in Flowerbomb was as harmless as an orchid (among its top notes, incidentally). “It was never a problem because the message is so clear,” Horsting says. “It’s a story and I think people like that. Plus it smells really good.”

Indeed, Horsting says he has detected the scent in innumerable, often quotidian places, including poolside at a hotel in Thailand and waiting in line at a movie theater. “I’m always taken by surprise. It’s as if I know something intimate about someone,” he says.

The designers followed up Flowerbomb with a men’s scent, Antidote, unveiled in 2006 during a fashion show with a ballroom dance theme that culminated with a display of tuxedoclad men whirling in a same-sex waltz.