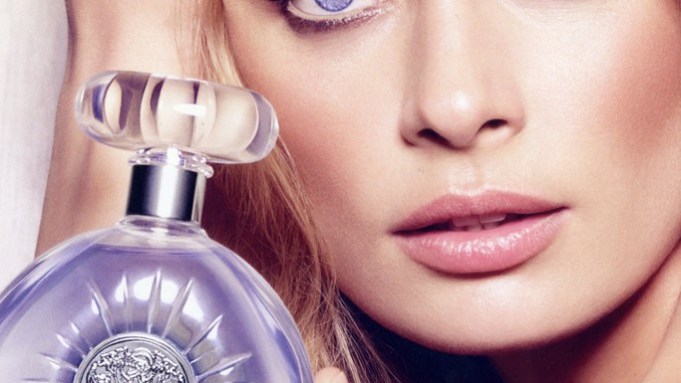 Vince Camuto creates fragrance with a fashion eye. He thinks in terms of colors and scents of flowers he finds in his garden at home, insisting that the final product be a finely calibrated marriage of details.

“Everything has to go together,” he said recently. That passion for connecting details embodies his latest fragrance project, Vince Camuto Femme. It is his third women’s scent, a sparkling floral chypre that was inspired by Camuto’s favorite flower, the delphinium. Holding a photo of the plant found in the garden of his 15-acre weekend estate in Water Mill, Long Island, Camuto explained how the bluish-lavender color figured not only in the design of the bottle but the choice of models for the ad. Leafing through a model book, Inguna Butane was discovered flashing eyes of a similar hue.

After his gold-inflected first fragrance in 2011, Vince Camuto, and the rose-tinted Fiori, which originally was intended as a springtime limited edition this year but ended up as a permanent part of the line, Camuto was ready for something else. Recalling how he had always thought about archetypical feminine figures like Sophia Loren, Grace Kelly and Jacqueline Kennedy, he noted, “We loved the idea of Femme [for a name] because it says it all and we were able to get it.” As for the positioning of the new fragrance, he noted, “We wanted something that signifies the strength and femininity — and yet be beautiful. A woman walks into a room, she can captivate.” He added, “You wanted something that makes you feel powerful. It looks good. It’s feminine at the same time, romantic. We really wanted to speak to [women] . Because we are not there to talk to her, the way that we are going to do it is through the product.”

Camuto double-checks by making in-store appearances and talking to customers. He recalls women telling him, “You know exactly what we want.”

Camuto pays close attention to the design of the packaging, which was done by Henry Thierion de Monclin, and makes sure the product has enough weight to make an impression, “where they can feel it and leave it on their bureau forever.” The rounded glass bottle was manufactured by Pochet. At the same time, he is careful about the pricing to make sure his fragrances are viewed as luxury items but within reach. “He gives great quality, yet it’s really upper moderately priced,” observed Donald J. Loftus, president of Parlux Fragrances Ltd., Camuto’s fragrance licensee. As an example, the 3.4-oz. size of Femme eau de parfum is priced $78.

Camuto said his intention was to offer a luxury product for less than $100. “Especially with our economy right now, we see that people now are looking for more — beautiful fashion, but they want to have a price point that is real.”

The fragrance was developed by Adriana Medina of Givaudan. She described how a “hint of spice” emerges as pink peppercorns mingle with citrus notes, producing a sparkle on top. The heart of the fragrance is filled with jasmine, rose and iris. The floral fusion gains intensity as background notes emerge. Patchouli, a mystery, defines luxury in a flirtation with vetiver, warm amber and hints of vanilla, she said.

The fragrance is due on counter at Macy’s in January, where it will be an exclusive until Valentine’s Day in February. Then it will roll out to Dillard’s, Nordstrom, Belk and Bon-Ton.

In the U.S. Loftus expects distribution to roll out to about 2,500 department stores, and later expand to Canada and Western Europe.

Camuto maintains that this could be his biggest fragrance hit. Loftus said Femme will form a new pillar for the fragrance business.

Parlux does not break out sales projections, and neither of the executives would comment on numbers. But industry sources estimate that Femme could generate retail sales of $12 million to $15 million in its first year.

Promotional plans so far call for running a print ad, shot by Nagi Sakai, in the February edition of Elle magazine. A video was made by Rob Kassabian, and it has been earmarked for broadcast on Camuto’s Web site/ fragrance microsite and for in-store use. In addition to being sold via various points of e-commerce, Femme will be promoted through targeted social media sites as well.