Men’s and women’s scents will launch at the end of April in Macy’s stores in the New York metropolitan area, at Yankees Stadium and online. 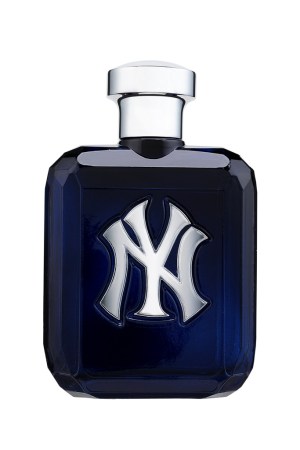 Fragrance is about to enter a whole new ball game with the creation of a New York Yankees scent masterbrand.

Launching at the end of April in Macy’s stores in the New York metropolitan area, at Yankees Stadium and online, the men’s and women’s scents will later expand to additional department stores domestically and in multiple international markets, said Tom Butkiewicz, chief executive officer and managing partner of The Cloudbreak Group, of the deal inked between his firm, Major League Baseball and the New York Yankees to create the prestige fragrance duo.

“In a category experiencing significant unit contraction and desperately seeking innovation, this partnership, with a professional sports team of this magnitude, is an industry first,” said Butkiewicz. “The Yankees are a multibillion-dollar franchise and we think we have a global opportunity with this deal.”

While fragrances are a first for the storied baseball team, Jason Latimer, assistant director of media and player relations for the Yankees, said he thinks it’s an idea whose time has come. “We consider ourselves a top global brand and we pride ourselves on class and elegance,” he said. “We felt Cloudbreak could execute that very well in fragrance.”

Both scents were concocted by Firmenich, working with Cloudbreak. The men’s scent, New York Yankees, described as a sporty, woody eau de toilette, features a blend of sparkling bergamot, coriander and cool blue sage on top; a heart of crisp ivy leaves, orange flower and geranium, and a drydown of rich earthy patchouli, smooth sandalwood and suede. The women’s scent, New York Yankees for Her, is described as an alluring, flirty, playful scent. The fruity gourmand eau de parfum opens with a blend of juicy guava, succulent plum and sun-kissed apricot nectar; with a heart of drenched strawberry blossom and rich tiare flower, and a drydown of creamy sandalwood, delicious vanilla and sensuous musk, noted Jennifer Mullarkey, senior vice president of product development for Cloudbreak. Both scents will be available in 1.7 oz. and 3.4 oz. sizes for $49 and $62, respectively.

Promotion efforts will include a permanent sign at Yankee Stadium, a print advertisement in Yankees Magazine and a promotional day, as well as an extensive online campaign, said Dennis Keogh, senior vice president of marketing for Cloudbreak, whom Butkiewicz credited as a driving force behind the idea. The social media campaign will include partnering with mlb.com and yankees.com on social media and a dedicated web address, yankeesfragrance.com, that is tentatively slated to go live in mid-March. E-tailing will be particularly important for the scents, “because Yankees fans are global,” said Keogh, who expects the rollout to also include military base/post exchanges, duty free, Puerto Rico and the Dominican Republic, given those markets’ strong ties to the Yankees.

While all parties involved declined to discuss sales projections, industry sources estimated that the masterbrand could do $12 million to $15 million in retail sales globally, with an estimated advertising and promotional spend of about $5 million globally.