YSL Beauté will launch the third installment of its L’Homme Yves Saint Laurent men’s fragrance trilogy this fall in an effort to reach a younger audience. 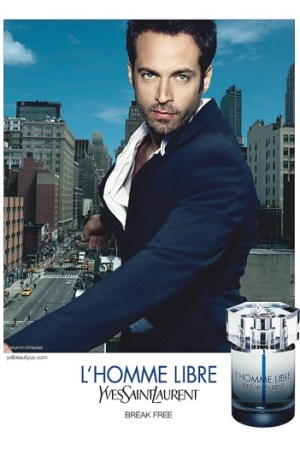 YSL Beauté will launch the third installment of its L’Homme Yves Saint Laurent men’s fragrance trilogy this fall in an effort to reach a younger audience while striking a synergy with the first two scents.

The original L’Homme was introduced in 2006 and it was followed in 2009 by its darker alter ego, La Nuit de L’Homme. Now comes L’Homme Libre, which will live up to its name with a TV commercial, starring Benjamin Millepied, a French-born principal dancer of the New York City Ballet, who choreographed “Black Swan” and appeared in the movie. He is also actress Natalie Portman’s fiancé. The 30-second TV spot shows Millepied dancing in the streets of SoHo in line with the fragrance’s free spirited positioning. The commercial will be broadcast in Europe in September and then in the U.S. in October and also will be beamed across the Internet to catch the eye of younger consumers.

“Freedom is one of the key values of YSL; freedom for men and freedom for women,” said Nathalie Durán, YSL Beauté’s general deputy manager of Yves Saint Laurent worldwide.

“Freedom is contagious; we all have to break free,” added Renaud de Lesquen, president of YSL Beauté at L’Oréal, the Paris-based parent.

Millepied is the latest “Black Swan” alumnus to appear in a YSL men’s scent campaign. The commercial for La Nuit, the last installment, featured Vincent Cassel, who starred with Portman in the movie, and the spot was directed by “Black Swan” director Darren Aronofsky. The L’Homme Libre spot was directed by Alejandro Gonzalez Inarritu, whose credits include “Amores Perros” and “21 Grams.” The print advertising was photographed by Patrick Demarchelier.

The positioning of the fragrance, as dramatized by the advertising, is “the debate between freedom and fate,” Durán said.

The executives noted that the freedom theme runs through the veins of the design house. In 1975, the designer created a unisex fragrance, also called L’eau Libre, that featured advertising showing intertwined black-and-white hands.

Renaud views the three scents as forming a strong marketing triangle, with consumers wearing any of the three scents depending on occasion or mood. The different formula and the younger target of the new scent would seem to minimize cannibalization. L’Homme is a classic woody, fruity fougère. La Nuit is a fresh oriental.

For L’Homme Libre, perfumers Olivier Polge and Carlos Benaim of International Flavors & Fragrances, created a fresh, updated version of a woody aromatic. Benaim noted that the accord of basil, star anis and violet leaves “has a lot of power and a lot of freshness.” The pink pepper and nutmeg contributes to the overall bright energy. The woody notes of patchouli and vetiver hold the formula together.

“I expect synergy definitely at point of sale,” said Marc Rey, president of the international designer collections at L’Oréal USA. “When we launch the new fragrance, we will take the opportunity to re-promote the franchise.”

YSL certainly seems to be throwing its muscle behind L’Homme Libre, not only with a commercial on TV and the Internet, but print will be augmented by 25 million scented strips. Five years after its launch, L’Homme still ranks number seven among U.S. men’s fragrances in department stores and number nine in France.

Executives declined to talk numbers, but industry sources indicate that the plan is to break into the top five in the U.S. That would mean $30 million in retail sales in the first year in the prestige market.