Bold-faced names such as Ed Burns and Peter Facinelli feted the launch of the company’s new Essenze Collection scent. 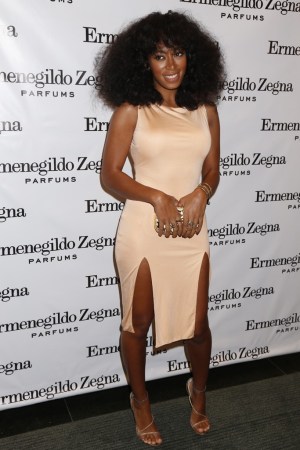 Zegna and the Estée Lauder Cos. Inc. must have tons of fans.

Billed as an intimate gathering for the launch of the companies’ new Essenze Collection fragrance, the event at the Zegna Fifth Avenue store in New York City Monday night drew an overflow crowd that included bold-faced names such as Ed Burns, Peter Facinelli, Dan Abrams, Josh Elliott, Jesse Palmer, Scott Conant and Kelly Rutherford, as well as industry executives including Jim Gold and Russ Patrick of Neiman Marcus. Solange Knowles served as DJ for the evening and guests were treated to cocktails inspired by the quintet of men’s scents that were in turn inspired by the Ermenegildo Zegna Couture collection.

Zegna chief executive officer Gildo Zegna, who cohosted the evening with Lauder ceo Fabrizio Freda, said he was in North America for three purposes: the fragrance launch, Art Basel in Miami and a visit to Mexico where he will be honored for the 20th anniversary of the company’s entry into that country. “Our business there is growing very nicely,” he said.

He will also spearhead a big party for the opening of a temporary shop for Agnona in Miami during Art Basel later this week, his first visit to that event. “I often go to the one in Switzerland,” he said.

Zegna said the association with Lauder is the “first step” in what is expected to be a long partnership between the two companies. “I’m sure there are different ideas that will materialize in years to come,” he said. That is expected to include the launch of a skin-care collection as well, according to Freda.

“These are two family companies,” said Freda, “with very similar values that both have a passion for creativity, quality and entrepreneurship and common goals.” He said both firms are “very interested in global markets, particularly China” where Zegna has a significant foothold. “And we are interested in getting more into men’s brands, so the association with Zegna is perfect. And the two teams work well together; we have the same spirit. In the world of fragrance, it’s not just about technology but building a business together.”

On the Zegna front, the company will be working to build its women’s business when designer Stefano Pilati joins the company in January as creative director of Agnona and head of design for Zegna Couture. His influence will be seen first with the spring 2014 collections and will mark a “new impetus for design” at the company, Zegna said, noting that Pilati will also be working on the company’s fashion show next June.

Saying fashion is a “world of imagination,” Zegna said it necessitates companies to “make a major step. We have lots going on in the men’s field and we have to remain the leader,” while also making more of a mark in women’s. “It’s a bold decision, what to do with Agnona. It’s in a super luxe niche with a strong point of view that is Italian style and creativity. That’s where Zegna is already represented and Stefano will [help us] when we create a new concept with Agnona. We think it’s going to be a long journey, but we’re ready to support the brand.”