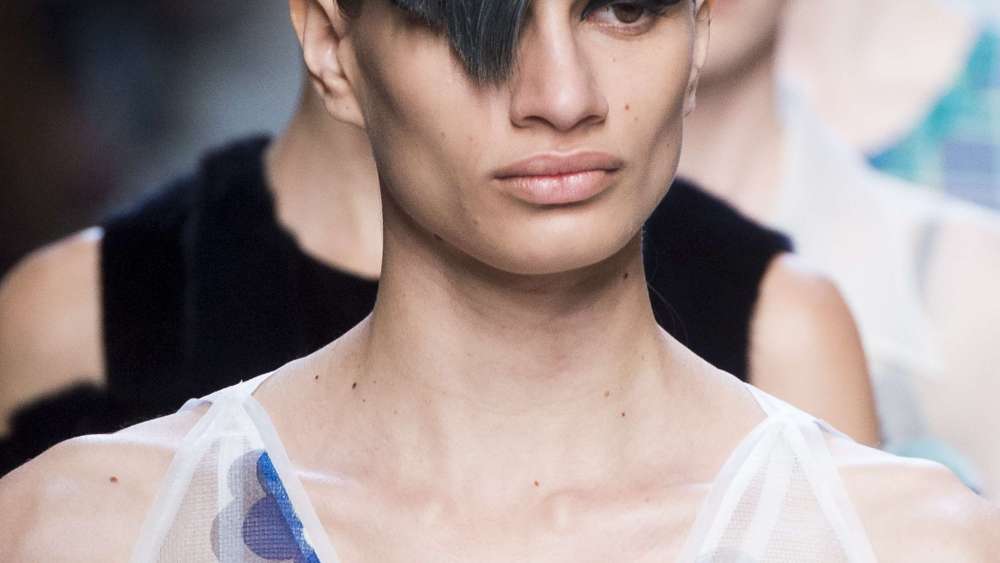 When it comes to hair trends for the season, there’s something for everyone, from bold look-at-me color to festival-worthy waves, here’s a look at what some of the top designers showed during Milan Fashion Week. See the gallery above for a comprehensive rundown, as well as runways in New York, London and Paris.

ALBERTA FERRETTI: A beautiful, sexy yet natural woman inspired hairstylist Guido Palau. The models’ hair was kept in romantic ponytails twisted back on themselves with elastics for a shorter effect. Using his Full Frame 07 mousse, Palau created a wet look and added shine with Shine Flash 02 glistening mist. The hair was pulled back but softened around the models’ ears and hairline for a little messy, casual look that was simultaneously very sexy.  The main feature was the texture and the softness around the face.

FENDI: Hairstylist Sam McKnight was inspired by a bold attitude. “The look at Fendi is a little bit quirky” and masculine, he said. Short haircuts close to the hairline were highlighted by blue, green and petrol shades in the same tones as the makeup to create that sharp masculine look. The Fendi woman is also strong, “but shares a quirky mystery at the same.” McKnight sprayed his own Cool Girl and Modern Hairspray mist on models wearing ponytails, pulled up very quickly for a natural effect.

PRADA: The hairstyle by Guido Palau was inspired by the boyish idea of a woman, shared with Pat McGrath’s beauty look. A group of models walked the runway with shorter hair with said boyish look, while another group sported soft ponytails. The key product was Palau’s Wax Blast 10 finishing spray.

GIORGIO ARMANI: The hairstyle by Aldo Coppola Agency was extremely graphic, in sync with the eyes, which were the focus of the makeup. Models wore a short black wig with a short fringe and sideburns, which defined a triangle.

ETRO: Hairstylist John Pecis was inspired by the atmosphere of a trip to India, with a touch of “a late Sixties — early Seventies look.” The idea was about a girl who just attended the ultimate music festival — think Jimi Hendrix or The Beatles. The hair was a little dampened and kept back off the face, conveying the idea of a girl on the move. But it was anything but messy: “We put an effort into controlling the hair and put it in a shape,” Pecis underscored. “It was like models had put their hands into their hair to push it back. The hair became dampened and heavy by starting with a volumizing mousse to hold the hair back and give a little bit of a wave. Then a curling iron was used to give a little bit of a wave, then a dressing cream was put over the top of that wave to feel like it was wet, even if it wasn’t.” It was all about an easy-yet-pretty look  “If you want to achieve it in your life you just have to use the right products to hold the hair in place,” Pecis suggested.

MISSONI: “A modern type of a bohemian woman” inspired hairstylist Anthony Turner, a quintessentially Missoni innocence.” This idea was reflected in a very light, easy yet cool hairstyle and in a beautiful texture. As the show was held outdoors, the hair had to be light and free to move. Using Moroccanoil products, Turner created low ponytails, and when girls were ready to walk he just “destroyed” them so that “even if there is a ponytail it’s gonna be very romantic,” Turner explained. Haircuts, Afros and curly hair were kept natural, maintaining each girl’s personal style.

MARNI: Hairstylist Duffy played on the idea of wet hair, as if the girls had just stepped out of the water. Hair was kept “supershiny, superwet-looking,” he said. But there was also an element of a “punky take on the Fifties,” though “it’s not Teddy Boy, it’s not rockabilly,” Duffy underscored.  The hair was well tightened on the back, using a lot of strong mousse and fixed with spray.