The hair-straightening company is in crisis mode — and the rest of the salon industry could feel the pain. 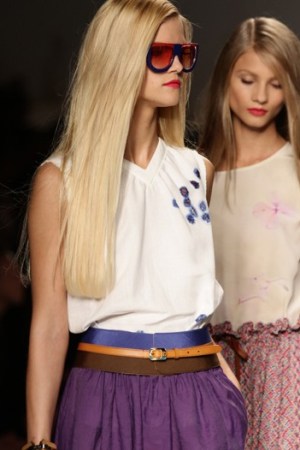 Brazilian Blowout is in crisis mode — and the rest of the salon industry could feel the pain.

The hair-straightening company is battling a tidal wave of public scrutiny of and legal investigations into its formulas and whether they contain formaldehyde. But the salon industry may have the most to lose if the firm doesn’t prove its formulas are safe for salons, stylists and consumers because of the impact it would have on industry sales.

Brazilian Blowout, the distributor and owner of the “life changing” serum, is taking its first swing back at the origin of its legal nightmare, Oregon Health & Science University’s Center for Research on Occupational and Environmental Toxicology. The firm filed a lawsuit Wednesday in Portland, Ore., seeking an injunction for Oregon Occupational Safety & Health Administration (OSHA) to cease reporting its results from an Oct. 29 report titled “ ‘Keratin-Based’ Hair Smoothing Products and the Presence of Formaldehyde.” The report, according to Brazilian Blowout, is “false” and “misleading,” and its contents have caused the firm “lost sales, consumer goodwill and industry market share.”

The lawsuit specifically states that OSHA’s labs improperly combined the levels of methylene glycol, a liquid, and formaldehyde, a gas, and that OSHA’s air monitoring results, while conducted in a way that could negatively impact results, showed that Brazilian Blowout had acceptable levels of formaldehyde.

But the OSHA lawsuit addresses only one of Brazilian Blowout’s upcoming battles. In November, the office of the attorney general of California filed a lawsuit against the company, mainly concerning its “formaldehyde-free” packaging, and there are ongoing investigations by the California Bureau of Labor, Department of Public Health, and Food & Drug Administration concerning its formulas; Health Canada issued a ban on Brazilian Blowout in Canadian salons in October, and daily phone calls from concerned stylists and salon owners continue to pour into the company’s North Hollywood headquarters questioning its formulas. There’s also the domino affect to consider, which has already begun in Canada. On Dec. 10, Canada supplemented its ban on Brazilian Blowout with a ban on 10 other hair-straightening brands, along with a request to salons that they return all the banned products to manufacturers and distributors.

While Brazilian Blowout may be just the first hair-smoothing company on the firing line of state and federal watch groups, a bevy of newcomers who promise more natural formulas are waiting to take the place of its predecessors (see adjacent story).

What the salon industry stands to lose if Brazilian Blowout doesn’t pass muster after all of the different investigations into its formulas is tens of millions of dollars in revenue, much of which has kept salons afloat as consumers curb the frequency of their hair cuts and prolong the time between color treatments. Recently, the Professional Beauty Association’s Salon & Spa Performance Index — a quarterly composite index that tracks the health and outlook for the U.S. salon-spa industry — recorded a modest decline of 0.3 percent for the third quarter of 2010.

While no data firm tracks how large the hair straightening category is, it is known that Brazilian Blowout, like its competitors, sells its formula by the liter, charging salons about $350 per liter, which ultimately represents about $9,000 in service sales for the salon. In a 12-month period, considering all the salons in the U.S. that offer hair-smoothing treatments, that represents hundreds of millions of dollars, if not $1 billion, in service revenue.

Salons and consumers do not want to give up the service, said Mary Rector-Gable, founder of the salon industry Web site behindthechair.com, according to feedback on her site and from what she hears from the industry. They do, however, want the truth.

“As an industry, they don’t want to see it go away. There’s no question that in very difficult economic times, keratin treatments have added a huge revenue stream. But they want an accurate report,” Rector-Gable said.

On Wednesday, a letter sent by the executive director of Canadian professional trade group Allied Beauty Association to its members addressed Health Canada’s ban on 10 hair-smoothing brands, mentioning the “economic harm to ABA members, salons and stylists” it is causing and questioning the group’s testing methods. Health Canada maintains that its testing methods are solid, stating “We are confident [these products] contain formaldehyde beyond the allowable limit. Health Canada continues to investigate other quantitative methods, which could also be used to test formaldehyde levels.”

Those named in the ban include Brazilian Blowout, variants of products by Global Keratin, Keratin Complex Smoothing Treatment by Coppola and Brazilian Thermal Reconstruction by Cadiveu, the manufacturer of Brazilian Blowout.

Mike Brady, co-founder and chief executive officer of Brazilian Blowout, which officially is known as GIB LLC, said that, in time, all the allegations and lawsuits will “go away.” He is confident that his team, which includes an army of Brazilian and U.S. counsel and a new public relations firm specializing in crisis management (Sitrick & Co.), with strong support from stylists, will help him prevail against existing allegations and lawsuits.

“No one wants [Brazilian Blowout] to go away. Not stylists. Not salons. And not consumers,” Brady said, explaining that he receives calls from the industry on a regular basis asking about his formulas.

“Every day we are telling them, we go through this [OSHA report on keratin-based products] with them. They are very passionate about Brazilian Blowout, and when you arm them with the correct information, they can convey that to their consumer and get business back on track,” he said.

“We did air monitoring. We hired a lab. We got our results and they were perfectly safe,” he continued. “My point is, I don’t care if it is the Grand Pooh-Bah or the sultan of Brunei doing the testing, [the legal investigations going on now] will get the exact same thing and every lawsuit will go away,” Brady said.

Among Brazilian Blowout’s other points within the nine-page complaint against OSHA is how the Oregon agency’s air-quality test results were not derived from test protocol established by federal OSHA rules; how 12 different brands were tested by the Oregon agency but only Brazilian Blowout was mentioned repeatedly and prominently throughout the report, and how a dozen additional brands were found to contain formaldehyde. It also refers to Oregon OSHA’s report that states the average formaldehyde gas exposure level for the seven salons tested with Brazilian Blowout by Oregon OSHA was 0.079 parts per million, beneath the OSHA action level of 0.5 parts per million.

Although Brady’s lawsuit addresses his legal feud with Oregon OSHA, there is still the lawsuit filed by the office of California attorney general and governor-elect Jerry Brown to contend with, an action that was fueled by the Department of Public Health.

“[We were informed] that there were a number of complaints coming into health authorities in Oregon, California and Canada regarding adverse health effects from formaldehyde released by the Brazilian Blowout hair treatment. This was of concern to DPH [Department of Public Health] and to us, particularly because the product’s manufacturer had not reported the existence of formaldehyde in its product to DPH as required under the state’s Safe Cosmetics Act,” said a spokesman for the office of the attorney general. Brazilian Blowout’s response to the lawsuit is due mid-January. Brady would not comment on how he would be responding to that suit, citing his “lawyers are handling it.” He also said his lawyers are handling the investigations by the California Bureau of Labor, DPH and FDA.

How Brady conducts business going forward remains to be seen, as Cadiveu, his Brazil-based supplier of Brazilian Blowout, stopped shipping him product in August. Brady said he has enough supply to last for now — he has “thousands of liters” of the formula remaining — but he is seeking a new domestic supplier as part of his 2011 plan.

He also is confident that, despite the negative attention, changing his company’s name, or filing bankruptcy are unthinkable.