"It’ll be a long term challenge for us to really flip that narrative and say that there’s nothing wrong with frizz."

The line, called Bread Beauty Supply, was founded by Maeva Heim, a Black-Australian woman and beauty industry veteran who struggled to find brands that resonated with her when she transitioned from relaxed to natural hair. She wanted to create something that provided a simple and fast regimen with clean ingredients as an alternative to product- and manipulation-heavy hair routines that are common in the natural hair community, she said.

“Black women have never really been part of conversations around that ‘lazy girl hair,’” Heim said in an interview over Zoom. “It’s always been very much about a lot of product, a lot of manipulation, and I don’t have time for that. We’ve got so many more important things to do…in order for hair to be quick, we have to embrace this idea of frizz and what that means to us, and what our hair does naturally.”

So, she founded Bread, which launches today on sephora.com and on its own web site, BreadBeautySupply.com, with three stockkeeping units. It will later roll into about 100 Sephora doors, and has secured more than $2 million in funding led by Imaginary Ventures, the VC firm of Net-a-porter founder Natalie Massenet that also backs Everlane, Glossier, Mejuri and Kosas. 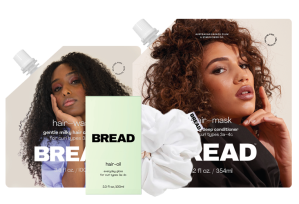 “It’ll be a long-term challenge for us to really flip that narrative and say that there’s nothing wrong with frizz. Embrace the frizz,” said Maeva Heim, founder of Bread. The products from Bread include Hair Wash, Hair Mask and Hair Oil.  courtesy

Heim designed Bread specifically for Black women with textured hair who have curl types between 3a and 4c. The product lineup includes Hair Wash with argan oil and aloe vera for $20; Hair Mask, a deep conditioner with starflower oil and Australian kakadu plum — which Heim notes moisturizes without being heavy — for $28, and Hair Oil, marketed as “like a lipgloss but for your hair,” with kakadu plum and safflower oil, $24. The products will also be sold in a kit that includes a bread-shaped bag and oversize vegan satin scrunchie called the Bread Puff for $58. Bread is part of the Clean at Sephora offering.

The brand name is meant as a nod toward simplification, Heim said. “This is kind of one of our slogans, which is that ‘we’re here for the essentials, the must-haves — like Bread’ — [that’s] where the name comes from,” Heim said.

The products smell like Fruit Loop cereal milk for an element of nostalgia, and the wash and mask are housed in pouches featuring Black models.

“When I was thinking about the brand and knowing that I wanted it to exist in a Sephora — and Sephora’s not alone in this — but I don’t think that there is any kind of major retailer where this woman is going to walk into a store and know that there are hair-care products for her there,” Heim said. “I wanted to make sure that if she was going to Sephora for skin care or for makeup, that this would catch her eye and she would see herself represented on the product straight away. That if there was no other brand collateral or messaging around, she would see that and be like, ‘Oh great, that’s for me.’”

Heim first met the retailer at a Teen Vogue event, and approached a buyer to say that she had an idea for a brand and would be in San Francisco the following week — which at the time, was not yet true, she said. “I read years ago that Jen Atkin had pitched her hair-care brand to Sephora and didn’t have any products yet. And I thought, ‘Well, maybe that’s something I can do,'” Heim said.

She secured the meetings, and connected with hair-care merchant and Sephora Accelerate program, which Heim completed. 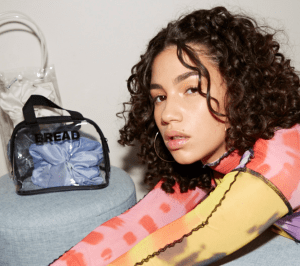 “[Bread] is not trying to be everything to everyone,” said Kelly Dill, principal at Imaginary, which invested in the line early this year.

“Maeva is very specific about who she wants to serve and how she wants to serve them — that comes through on the packaging, in the name, in the product itself. She’s here for women with textured hair. I have straight hair, I’m Asian, and I can use the product…but she’s not trying to pretend it’s for everyone. It’s really speaking to the consumer who hasn’t been spoken to, that’s what really resonated with me. In a pre-launch business you’re investing in the founder, and I was really investing in Maeva,” Dill said.

“I’m not investing in a white man trying to sell to Black women. I want to invest in a founder who has the passion and the story and the product,” Dill said.

Dill noted that women with textured hair have long been underserved. “There are numerous cool, edgy brands for women with straight hair, and that didn’t exist targeting Black women or women with curly hair,” Dill said.

Heim, who grew up helping her mom in her African hair braiding salon in Perth, Australia, said she had been chemically relaxing her hair since she was about six years old until a few years ago, when relaxer exploded in her suitcase on a trip from New York to Colorado.

“At the time, maybe because I was in nature, but also because I had been transitioning a lot of my skin-care products over to things that were a little more clean, I realized that I was putting this product on my head every three to six months for a good 20 years and that my scalp was also my skin and it was probably something I should consider not doing anymore,” Heim said.

She went into a store looking to buy products specifically for textured hair and found the selection to be “dated.”

“I felt like I had gone in a time machine back to 1995 and nothing had really changed,” Heim said.

“I just wanted to know how to wash my hair and nobody was really providing that in a very simple way,” she added.

Online forums centered around natural hair could sometimes seem judgmental and glorify “really done curl” types, Heim said, but would often exclude other hair textures. “But there is this whole community out there that is like, ‘No, I want to stop using relaxer, but I also just want to do whatever I want with my hair,’” she said.

For Heim and the shoppers Bread is targeting, that means embracing texture, including frizz.

“There’s this idea of what is aspirational in not just beauty, but specifically hair…it tends to be very glossy and photoshopped. You have to have these perfect styled curls that don’t have a single bit of frizz and actually, the woman that we’re speaking to doesn’t really care about that anymore,” Heim said. “It’ll be a long-term challenge for us to really flip that narrative and say that there’s nothing wrong with frizz. Embrace the frizz.”

With Bread, she wanted to make wash day quick, she said, but had found that co-washes didn’t always leave hair feeling clean, and shampoos left her with dry and knotted hair. “That would add like, an hour, to my routine trying to brush out the tangles,” Heim said. Hair Wash is designed as a hybrid product — moisturizing, but with a slight foam. Heim describes the texture as “liquid marshmallow.”

The Hair Mask is a deep conditioner that is meant to be left on for between five and 10 minutes. The Hair Oil is multipurpose — it can be used post wash and in-between washes, but also left on for a few hours as a pre-wash treatment to soften hair, Heim said.

Heim declined to comment on sales projections, but industry sources estimated the line could do between $3 million and $5 million in its first 12 months.

Going forward, Heim intends to keep the sku count low, but plans to branch into other categories and other curl types, she said.

“We have always wanted to be a brand that would eventually be all-encompassing…beyond hair, there’s so much opportunity in other categories to provide these better products and talk to this customer in the way that everybody else gets spoken to,” Heim said.