The brand is adding to the reportedly $20 million franchise with Surf Infusion, a new product aimed at creating beachy waves for those with dry and coarse hair. 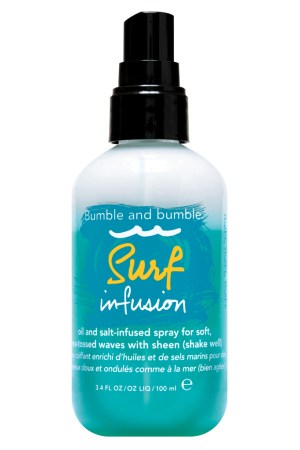 Surf’s up at Bumble and bumble.

The brand, which launched its best-selling Surf Spray in 2001, is adding to the reportedly $20 million franchise —which also includes a shampoo and conditioner — with Surf Infusion, a new product aimed at creating beachy waves for those with dry and coarse hair.

“Surf Spray has been one of our bestsellers since it was launched,” said Peter Lichtenthal, global brand president for Bumble and bumble and Bobbi Brown.

Created by Laurent Philippon, global artistic director for Bumble and bumble, Surf Infusion is a bi-phase salt-in-oil formula containing a mix of coconut, mango seed, passionfruit and palm oil and a sea salt and mineral blend. When consumers shake the bottle vigorously before using (a point the brand underlines by instructing on the bottle “shake, shake, shake”), the oils and the salt are mixed together, offering a tousled beachy look without making the hair unattractively crunchy, noted Fadi Mourad, vice president of product development and innovation for Bumble and Bumble. “A lot of our clients like the original Surf Spray, but don’t have the right texture hair for it,” said Mourad, noting that the original product is best for fine-textured hair. As well, he added, the original spray leaves a matte finish, while the new offering imparts a subtle shine.

The product, which launches later this month in salons and in Sephora in April, will retail for $29 for a 3.4 oz. bottle and will be available in about 4,000 doors, including the brand’s salons, its global network of salons, bumbleandbumble.com and Sephora. While executives declined comment on projected sales, industry sources estimated that the new product could generate first-year retail sales of $8 million in the U.S. in its first year on counter. Its bottle resembles a neoprene-covered scuba tank, chosen deliberately to underline the beach positioning, said Brett Dean, vice president of creative for Bumble and bumble.

Bumble plans a healthy promotional campaign — both in-store and digital — for the product, using visuals shot by Regan Cameron (a longtime friend of Philippon) for the launch, said Bernard Zion, vice president of global marketing for Bumble and bumble.

Another round of promotion is planned in late April, through a digital partnership with Hawaii-based surf blogger Tara Michie of ladyslider.com. Michie is creating content for Bumble’s social media channels, which include two social-media-only videos, and will take over Bumble’s Instagram account for a week beginning on April 20. The Michie campaign is kicking off a social/viral push around the hashtag #BbSurfStories, said Zion.