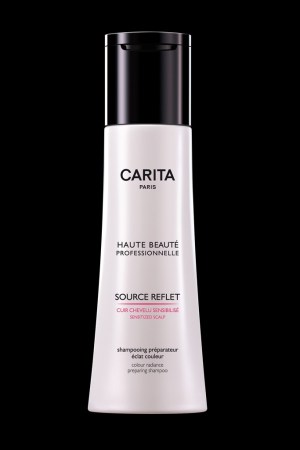 PARIS — The traditional shampoo-conditioner, one-two punch in hair salons is becoming a thing of the past for Carita Paris.

Carita parlayed its skin-care expertise into the world of hair care, according to the label.

The new line includes 16 products for stylists to use at the sink, three technical items and 21 retail products.

In salons, the first two steps for the client focus on their hair’s roots and include “preparation,” entailing deep cleansing, which is followed by an “activate” step using serums. Phases three and four, “reveal” and “sublimate,” are meant to fortify, protect, embellish and shape hair fibers.

“We [have moved] to a protocol much more complete,” said Carita Paris’ hairstylist director Tom Marcireau.

“It’s a program created by professionals for professionals,” added Carole Agathopoulos, marketing manager at the brand.

The line will be rolled out further starting in 2014. It is to enter about 1 percent of high-end salons in France, or approximately 600 locations, within three years, for instance, according to Marcireau.

In another twist, Carita’s Cinetic Lift Expert tool, which the company had formerly only used on skin, is now available for hair, employing ultrasound and/or LED lights in one of the brand’s most in-depth treatments, Les Soins d’Exception.