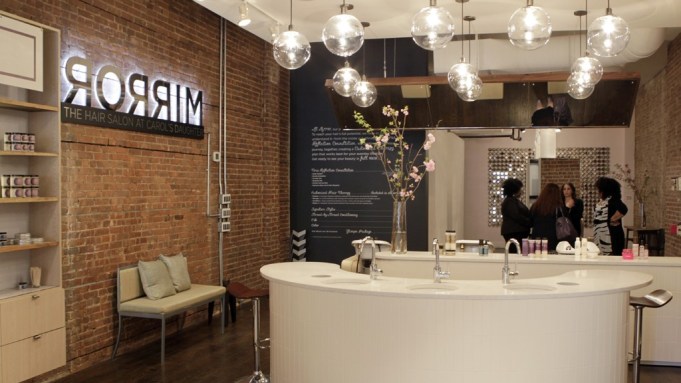 Carol’s Daughter founder Lisa Price has taken on another area of beauty: salons.

Twenty years after founding her beauty-product company, Price is partnering with Georgia-based entrepreneur Robin D. Groover on the space, dubbed Mirror: The Hair Salon at Carol’s Daughter. The salon, located inside Carol’s Daughter’s Manhattan flagship in Harlem, is set for a grand opening Monday. A second salon installation is planned for Carol’s Daughter’s Atlanta store in May.

The focus for the salons: healthy hair, particularly natural solutions to relaxing hair for all ethnicities. And Groover, who is both a salon owner and chief executive officer of Groove Therapy Healthy Hair Care Systems, has long been a proponent of natural alternatives to chemical-based relaxers. She pioneered the Ceramic Fusion Styling Technique, which after shampooing involves a cocktail of conditioners, followed by steaming the products into clients’ hair. Hair is then finished with a ceramic flatiron.

Price and Groover met in Atlanta when Price was doing a personal appearance at the Lenox Square Macy’s. “Everyone kept telling me that I needed to meet Robin, that she had this amazing steam technique,” said Price. “Once I met her, we talked for hours and knew we wanted to do something together.”

Half of the Harlem store’s nearly 2,000 square feet is now dedicated to the salon, which features three shampoo sinks with mirrors mounted above them — so clients can see exactly how to use the products and ask questions — and three additional smaller sinks are designed to allow customers to experience products on their hands first.

After a consultation with each client — which includes a scalp analysis, density evaluation, porosity test and elasticity test — stylists use a clarifying shampoo, then create a personalized cocktail of conditioners based on the test results. Four styling stations are devoted to blowouts, which start at $65, and other styling offerings, such as twists and curls, which start at $85. Cuts start at $35, color at $45.

Along with the salon, Price will launch a new stockkeeping unit, Monoi Anti-Breakage Spray, in July. The $24 product includes the brand’s signature Monoi Oil, which combines Tiare gardenias and cold-pressed Coprah coconut oil, and is designed to detangle, protect and strengthen hair.

Hair care continues to be a major focus for Carol’s Daughter, according to ceo Richard Dantas. “We’ve grown our hair-care segment by some 40 percent, as a result of the tremendous uphill work ­— repackaging, product innovation and more — from the company. Our Monoi franchise has been a particularly big success because it addresses the number-one hair concern of women: damage/breakage, and we’ve continued to expand by offering Monoi Split End Sealer, Serum and the new Anti-Breakage Spray. We began the brand in 1993, at a time when Lisa was a pioneer in texture, healthy hair and scalp care. Two decades later, the brand is still leading the category, innovating in a space that we had a hand in creating.”

While none of the executives would discuss sales figures, industry sources estimated that Mirror: The Hair Salon at Carol’s Daughter would do about $600,000 in this calendar year, with that figure ramping up to $1 million in 2014. The new Monoi Anti-Breakage Spray could do close to $2 million at retail in its first year on counter.