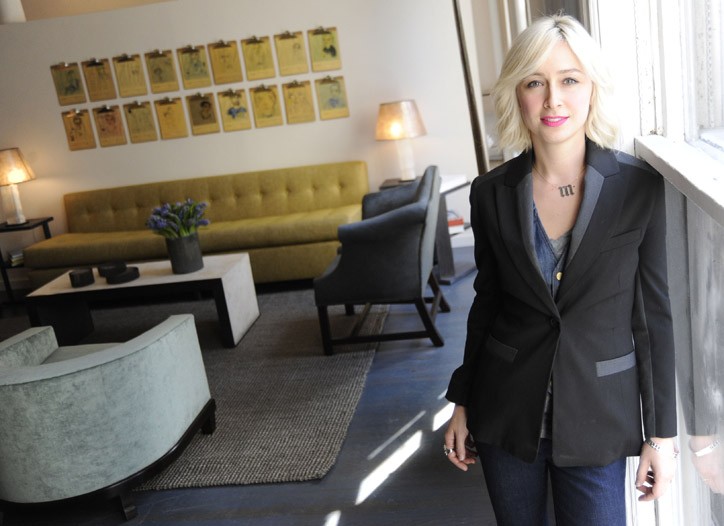 It happens to the best and brightest salons: an exodus.

This past Monday, Marie Robinson, a colorist with a celebrity clientele that stretches from Scarlett Johansson to Anne Hathaway to Uma Thurman, and formerly a senior colorist at the famed Sally Hershberger Downtown salon, opened her own salon in the Flatiron District, and subsequently, seven employees followed.

Robinson, who had worked at the 423 West 14th Street location since it opened six-and-a-half years ago — and who also was Hershberger’s personal colorist — explained that the split “wasn’t personal” but that in order to build her own brand, she needed to start her own salon.

The financial impact on Hershberger’s salon, if any, said industry experts, would be immediate.

“If [those who left] can get 15 to 30 clients each to follow them and then multiply that by the number of stylists who left, that is a significant amount of business,” said Julien Farel, who operates a salon on the Upper East Side.

Industry sources estimate the Downtown salon to generate more than $1 million a year in sales.

Robinson said she had always dreamed of opening her own salon — at some point — but that she was surprised when so many of her colleagues wanted to follow her. Asked why such a strong allegiance to her as opposed to the salon’s famous owner, who gave many of them their start, Robinson speculated that due to Hershberger’s busy schedule, [Robinson] ultimately “became a liaison between the employees and Sally. I think we became a very tight family [because of her absence].”

She stressed that she didn’t ask anyone to come with her, rather, many asked to join her when word of the news began circulating in mid-March.

While Hershberger, who charges $800 for a haircut, may not have been in the salon day to day, at least according to Robinson, she has indeed been busy building a multimillion-dollar empire. In addition to her three salons in the U.S. (two in Manhattan and one in Los Angeles), Hershberger launched a hair care line for the mass market in 2008, Supreme Head, which is sold in Ulta, Duane Reade and Ricky’s NYC. In March, she launched a professional hair care line, Salon, for HSN. She also travels to trade shows to support her retail lines and continues to be one of the most sought-after hairstylists in the world.

Robinson and business partner-stylist Abell Oujaddou tapped designer James Huniford to create the space, which features 26 chairs, blue and gray-washed wood floors, huge windows looking east and west and various nooks and sections that aim to make the modern, 5,000-square-foot space appear intimate. The salon uses Shu Uemura and Davines hair care brands, among others. Robinson charges $200 for a single process and $300 and up for a single process with highlights.

Aside from the Hershberger outpost, several other top-tier salons lost staffers in the making of the Marie Robinson salon. Employees also now include Ryan Cotton, formerly of Serge Normant; Bryan Thomson-DiPalma, formerly of Tosler Davis and Robinson’s personal colorist, and Landy Dean, a makeup artist and eyebrow guru, formerly of Edris. The stylist Danilo will also call Marie Robinson home from time to time when in New York; the two met at Pierre Michel 17 years ago, where Robinson got her start.

It isn’t uncommon in the salon industry for staffers to go out and start their own venture, explained Farel, who himself left an eight-year career at Frédéric Fekkai to open his own salon in 2001. But while leaving to start a business is typical, having what could be as much as 10 percent of a staff leave is not. He speculated, based on his own experience, that there may not have been future prospects for the staff at Downtown.

“[For me at Fekkai] nothing was coming along…and you’re in your 30s, you have to do for yourself,” he said.

Hershberger, Robinson and the former Downtown staff parted ways March 19, the day the uberstylist confronted Robinson about her plans to move, which she apparently heard about through the grapevine.

According to Tommy Buckett, now a Robinson stylist who opened the Sally Hershberger salon in 2003 and who at the beginning of his career served as Hershberger’s assistant, Hershberger called him on the phone that Friday and asked if he was staying or going with Robinson. The rest of the staff, he said, was asked of their plans and those who were joining Robinson were asked to leave.

“I just wanted a new chapter. You have to go to grow,” Buckett said.

Hershberger and Robinson go back 11 years. After beginning her career at Pierre Michel, Robinson met Hershberger at John Frieda, where Robinson worked for five years and became Hershberger’s personal colorist. When Robinson was lured to Bumble and bumble by then-president Michael Gordon, Hershberger visited her there for her usual color treatments. When Hershberger opened her Meatpacking District salon in 2003, Hershberger lured her away from Bumble to join her staff.

And in the salon world, what comes around, goes around.

“It wasn’t personal,” Robinson said of her decision to leave. “It was business. [Hershberger’s] incredible. If I hadn’t started my own salon, she would have been my only boss,” Robinson said.