Hairstylists Andy Lecompte and Leanne Citrone's career paths have been intertwined ever since they arrived in Los Angeles a couple months apart 11 years ago. 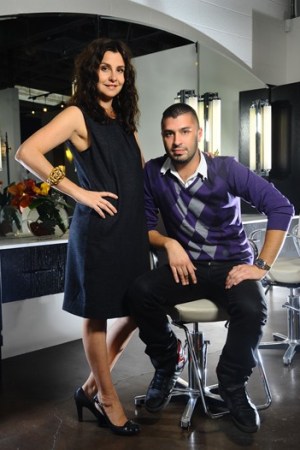 Hairstylists Andy Lecompte and Leanne Citrone’s career paths have been intertwined ever since they arrived in Los Angeles a couple months apart 11 years ago.

They met at Privé salon, where Lecompte’s first L.A. gig was on the cutting floor and Citrone’s was assisting Laurent DuFourg, both leaving at the same time for Chris McMillan for Art Mix the Salon in 2002. Now, the pair have partnered on the Andy Lecompte Salon, named for Lecompte to bank on his growing fame and run day-to-day by Citrone.

“We balance each other really well,” said 29-year-old Lecompte, who has been handling hair on Madonna’s Sticky & Sweet Tour since August. “She gets things done, and she can be tough.” Citrone, 34, chimed in, “He’s really good at the people stuff. We really are good at different things.”

The 2,500-square-foot salon, nestled behind designer Jenni Kayne’s store in West Hollywood, clearly is a joint effort. Citrone is a big fan of white, so there’s white tufted leather on the front desk and white paint covering the walls and wood ceilings. Lecompte favors black, the color of the cabinets and hanging lights.

“I wanted it to feel industrial. We are leaving the cracks,” said Citrone, pointing out lines that run along the brown cement floors and that fracture the windows. Art in the salon — eye-catching works by Paul Rusconi, Robert Rauschenberg, Marilyn Minter and Andy Warhol — fosters a modern, loft-like feel. Johnna McHugh and Janet Perkins, interior designers who worked on Citrone’s house, helped with the salon design.

Kayne, Citrone’s long-time client, initially alerted Citrone and Lecompte to the former flower warehouse, but they drove around L.A. neighborhoods at night together scouring alternatives to make sure it was the best location. A glitzy address wasn’t their main concern. Instead, their goal was to provide privacy and a comfortable setting, which they have cultivated with the salon’s leafy walkway entrance and waiting area furniture from Citrone and Lecompte’s personal collections.

“We wanted it to feel like you walked through an enchanted garden and found a special place,” said Lecompte. “It didn’t have to be in Beverly Hills, but it had to be Beverly Hills adjacent, somewhere central. This seemed like a very interesting spot, not within Beverly Hills with the traffic, but near where our clients shop at Maxfield and Jenni Kayne, and work out at the gyms.”

Service is one salon priority that Lecompte and Citrone agree upon completely. The front desk employee greets clients by name, and coffee and fresh water is brought out to them on trays, for example. “Times are tough, and if people are still going to spend on the way they look, they should feel it is worth it,” said Citrone.