Despite a lack of industry experience, it may be his connected and accomplished friends that initially help drive customers through the door. 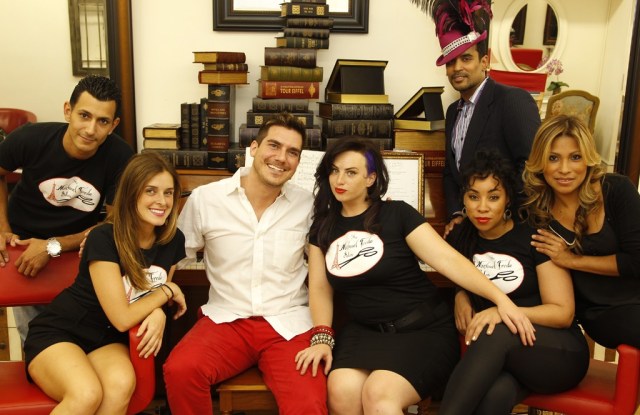 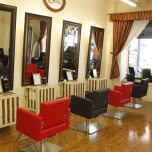 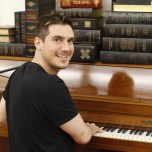 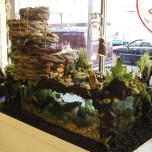 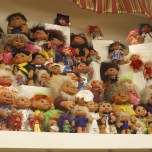 NEW YORK — The idea that a Juilliard-educated musician-producer-entrepreneur can take on the highly competitive — and challenged — salon business seems so wacky it just might work.

The concept behind the Michael Fredo Salon, founded in June by 33-year-old Michael Fredo, is to create a headquarters where his friends, many of whom are in the entertainment, nightlife, fashion and music industries, can hang out and, yes, get a haircut.

True, the hairstyling aspect is uncharted territory and only became a consideration after the space became available (Fredo had wanted to open a restaurant), but Fredo grabbed the opportunity to create a hub for his music and a platform for him to perform all day for a built-in captive audience.

“The salon is modeled after my uncle Tommy’s first retail venture, People’s Place, in Elmira, New York. It was the Seventies and the store sold records, posters and clothes, and was a hangout spot for him and his friends. This is my version of that,” said Fredo, speaking of Tommy Hilfiger, his mother’s brother.

Despite a lack of salon industry experience, it may be Fredo’s connected and accomplished friends that initially help drive customers through the door. Or at the very least, create a buzz.

On a recent visit to the salon, located at 1349 Lexington Avenue at 90th Street, salon visitors ranged from Liam McMullan, the son of celebrity photographer Patrick McMullan and a photographer in his own right; Aesha Waks, an actress, and Nicole Bandklayder, the manager for Chris Nirschel, one of the finalists of “The Next Food Network Star” series. Each greeted Fredo with open arms and reiterated they’d lend their talents and contacts to help grow his salon business. Even the bottled water offered to salon clients, Llanllyr Source, is provided free of charge by a friend, and is referred to as the salon’s “water sponsor.”

After gazing at the salon’s decor, Waks perhaps best summed up the vibe as something out of “Willy Wonka and the Chocolate Factory,” what with the upright piano covered with sheet music and song books, theater drapes in the windows, a carved-out nook for Fredo’s stuffed troll collection and an aquarium filled with baby turtles, fish and a blue lobster. Fredo smiled at the comparison, then continued playing his version of the song “Killing Me Softly” as several stylists performed trims.

Indeed, Michael Fredo is not the typical hair salon, as the owner isn’t trained in either a blunt cut or balayage. But there’s something to be said, these days especially, about the draw of celebrity, even if it is once removed. He does, though, have an impressive entertainment résumé: he was educated at Juilliard; he has collaborated with producers including Quincy Jones; he has performed original material opening for Norah Jones and Lenny Kravitz; his single, “This Time Around,” reached number 21 on the Billboard Hot 100 Singles Sales Chart while touring with Britney Spears on her “Baby One More Time” tour, and his first album, “Introducing Michael Fredo,” sold more than 500,000 copies worldwide while his music videos played extensively on MTV. And, the salon seems to be an inspiration for future endeavors as he is working on a new album, “Songs From the Salon.”

Thankfully, for the sake of his stylists and colorists, Fredo’s musical connections are building a clientele: His last gig as the leader of The Plaza hotel’s in-house band lent itself to doing weddings, which has led to many styling appointments for upcoming nuptials.

While many in the salon world may take a collective gasp in hearing that an entertainer is taking on the high-pressure, quick-paced and competitive world of the professional beauty industry, Fredo’s creative director, Andretti Mullens, said they are merely approaching operating the salon as they would any business venture.

“We are running a salon and making it a home base for Michael’s music. We made it a theater salon. We are taking all that we know and turning it into a business,” said Mullens, known as Andretti Andretti in fashion circles.

Mullens brings to the table his own dabble with celebrity: He was a past contestant on “Fear Factor” and is now looking forward to an upcoming role on Bravo’s new TV series “The Single Elite of New York,” which begins filming in August.

But how did the salon stock products? Which brands did they go with? How did they hire for the salon’s six stations?

“I’m still working on it,” confessed Fredo, who added, “But really, it’s sort of a majority vote of what the stylists like using most and what they are comfortable using, and also products that I personally like myself.”

Mullens added, “We did our research. We asked everyone what products we should carry. Our stylists loved Moroccan Oil, so we carry that. Michael’s mom loves PureOlogy, so we carry that, too. We reached out to people who knew friends looking for styling jobs. We just did it,” said Mullens. As for service prices, a women’s cut and blow-dry is $65 and single process colors runs $80.

A salon standout includes operating seven days a week. And, at least one staffer is obsessed with organic and green products, so a station at the salon has been dedicated to these types of treatments, including the straightening service by KeraGreen.

A grand-opening party is being planned for fashion week, to be hosted by Hilfiger, Fredo said. Other notable upcoming events are in the works, too, such as a possible visit by Alexa Ray Joel. On Thursday, a visit by LuAnn de Lesseps of “The Real Housewives of New York City,” who Fredo said he had the pleasure of singing with during his time at The Plaza, came into the salon and sang with him. He said he will post a video of the duet on YouTube.

Fredo has high hopes for the salon’s evolution, too.

“Though I’m not a clothing designer, I would like to use my entrepreneurial ways to venture out into that some day,” said Fredo, a decision that may create a space challenge, or at least a design conflict, depending on where the rolling rack is placed, next to the fish tank or the troll collection.