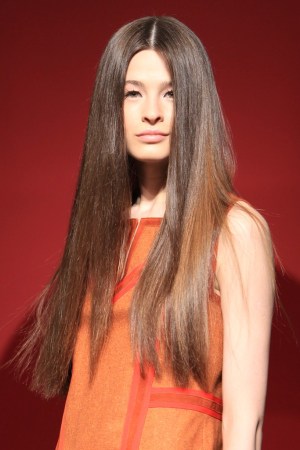 This story first appeared in the March 9, 2012 issue of WWD. Subscribe Today.

“I don’t get people who say they’re over blush. You can put it everywhere—on the cheeks, the nose, down near the jaw. It just works.”

Highly lacquered hair and precision cuts with nary a strand out of place were a departure from the normally laid-back locks of New York’s runways.

Makeup artists made a strong point this season with graphic eyeliner. The effects ranged from patrician to all-out punk.

Daphne Groeneveld’s platinum tresses ushered in a season rife with white—in both hair and makeup.

“I’m doing lots of volume here and at Carolina Herrera, so a comb for backcombing and lots of hairspray.”

I’m really feeling a strong, thick Eighties brow with lots of brow pencil—it feels new and looks good on many.”